The event, free and open to the public, is set from noon to 1:30 p.m. in the half-acre bee garden, located on Bee Biology... 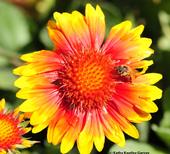 Meanwhile, misinformation about bees continues to surface.  Posts on Facebook, Twitter, Pinterest and other social media often caption a syrphid fly as a bee or a syrphid fly as a bumble bee. Magazine and newspaper editors frequently misidentify a syrhpid fly (aka flower fly and...