Tarweed in the foothills.
With the cooler weather and later developing cotton crop in the San Joaquin Valley, 2011 is providing some challenges to cotton production. Add to that challenge the possibility of moderate to severe Lygus outbreaks in some locations.

The large amount of rainfall this winter and spring will set the stage for more Lygus in summer. The relationship between historic rainfall records and annual cotton loss estimates supports the idea that Lygus will be more problematic this year and observations from the ground confirms this assessment. However, as in other years, the primary source of Lygus will be from crops and locations within a few miles of your cotton field, not miles away from the edge of the Valley.

In the past month, I have been conducting the annual Lygus survey. The survey was later than usual because of the extended rainy season into April and cooler temperatures in May. This is what I have observed:

Safflower plays a major role as a plant host bridge, allowing overwinter populations to settle and reproduce. Safflower plantings are spread throughout the Valley and will act as localized sources for Lygus into susceptible crops. The problem can be alleviated by managing Lygus population in safflower before the nymphs can become adults and leave the field. For details on managing Lygus in safflower to mitigate movement into cotton, refer to IPM in Cotton in the Western Region of the US, UC ANR Publication 3305.

The first stop on country music artist Michael Peterson's whirlwind tour of San Joaquin Valley agriculture today was the Kearney Agricultural Research and Extension Center, where he enjoyed fresh fruit produced by local farmers and was introduced to the science behind the California agricultural industry's tremendous success. Peterson was in the Fresno area as a guest of the World Ag Expo, the largest agricultural trade show in the world, which takes place each February in Tulare. Expo organizers are exploring the development of a partnership with Peterson to help spread the word across the nation about California agriculture.

Peterson was a member of 4-H as a youth in eastern Washington. That early exposure to agriculture, he said, may have planted the seed that developed into his current affinity for the farming industry.

Peterson brings a measure of celebrity to the effort to share the message about California agriculture. His country music debut album in 1997 produced four hit singles, “Drink, Swear, Steal and Lie," "From Here to Eternity," “Too Good To Be True” and “When the Bartender Cries.” He was named Top New Artist of 1997 by Billboard and Radio & Records and honored as Country Weekly's Male Newcomer and Gavin's Artist to Watch in 1998.

More recently, Peterson has been active in youth development and veterans' programs. He presents a school assembly called "Tag, You're It," which blends illusions, humor, interactive multi-media, audience participation and the power of the internet to help improve test scores and boost high school graduation rates. He has also traveled to Iraq several times to perform for the troops and is creating a music project for the Military Child Education Coalition.

Peterson said he was impressed by his visit to the Kearney Agricultural Research and Extension Center.

"I never thought about the science part, on this level, being so important in agriculture," he said. "Thank goodness y'all are here."

In the video above, Michael Peterson expresses esteem for California agricultural science. For a transcript of the video, please email jewarnert@ucdavis.edu.

Hispanic farmers gathered at the Kearney Agricultural Research and Extension Center today for a half-day seminar in Spanish about small-scale agricultural production.

A key topic was food safety. UC Cooperative Extension small farm advisor Richard Molinar acknowledged at the meeting that farmers who have been producing crops for dozens of years without incident might wonder why documenting food safety procedures is warranted. He said heightened awareness of food safety issues has consumers and retailers demanding such documentation, even if it isn't required by law. In the future, government agencies might develop food safety guidelines for small-scale farmers.

"Retailers are asking packinghouses and wholesalers for the food-safety documents," Molinar said. "They want to see written policies in place."

Other topics addressed at the meeting were squirrel and gopher control, sucking insect control, groundwater protection and pesticide calibration. 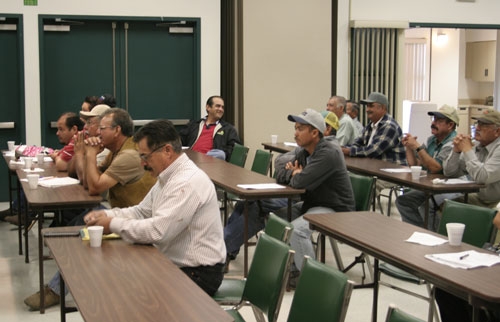 The Hispanic Farmers Conference at KARE. 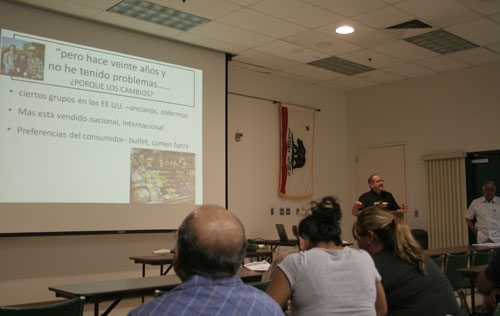 BMSB is now found in 33 states. Although not established in California, it has been identified in Los Angeles and Solano counties. BMBS can fly, but they primarily move into new areas by hitchhiking on vehicles and equipment.

Native to Asia, it's thought that BMSB arrived in packing crates shipped to the Eastern U.S. It has a large host range that includes grapes and many of the fruits and vegetables grown in California. Damage can be substantial when BMSB populations are not identified early and managed appropriately.

Apple growers in the Mid-Atlantic states have reported losses of $37 million representing 18 percent of their fresh apple market. Growers and wineries are also concerned that the “stink” from any bugs accidentally crushed in wine or juice grapes could taint the product with off flavors. This insect should concern homeowners as well, since people in the Mid-Atlantic states have reported large populations of BMBS overwintering in their homes and becoming a nuisance.

BMSBs resemble some other California stinkbugs, such as the rough stink bug, a beneficial predator of other insects. If you think you’ve found a BMSB, or any other odd or unique looking insect pest, you should collect it and bring it to your local university advisor, ag commissioner or state ag department entomologist for proper identification. Early identification of invasive pests is critical for protecting California’s billion dollar agricultural industries.

You can learn more about the BMSB and current research here. 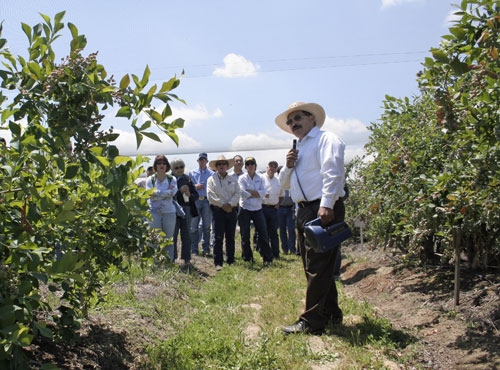 Manuel Jimenez leads a tour of his research planting. 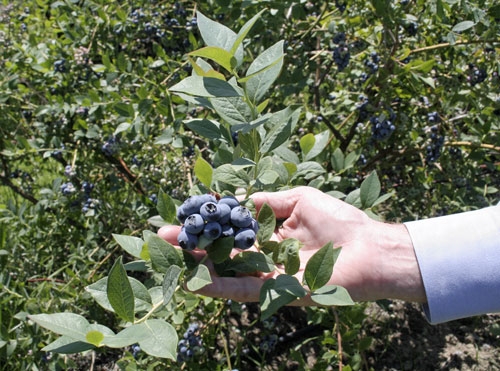 California blueberries ready to be harvested. 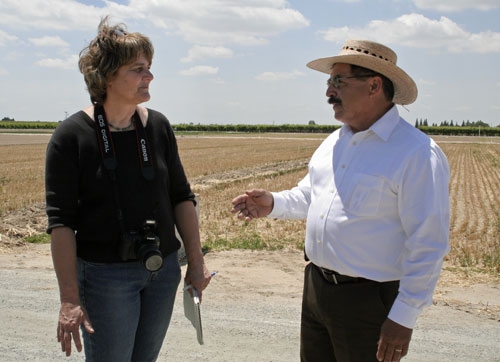