"With this research, we are laying the groundwork for understanding drought tolerance in cereal crops," said Jeff Dahlberg, UC Cooperative Extension sorghum specialist. Dahlberg, co-author of the study, is also director the UC Kearney Agricultural Research and Extension Center in Parlier, one of nine research and extension centers in California that are part of UC Agriculture and Natural Resources.

"That has implications for feeding the world, particularly considering changing climate and weather patterns," he said.

"People have really shied away from doing these types of experiments in the field and instead conduct them under controlled conditions in the laboratory or greenhouse. But I believe that the investment of time and resources that we put into it is going to pay off, in terms of the quality of the answers that we get, in terms of understanding real-world drought situations," said Peggy Lemaux, UC Cooperative Extension specialist in UC Berkeley's Department of Plant and Microbial Biology and co-author of the paper.

The data was collected as part of the Epigenetic Control of Drought Response in Sorghum, or EPICON, project, a five-year, $12.3 million study into how the sorghum plant is able to survive the stress of drought. The EPICON study is run as a partnership between UC Berkeley researchers and scientists at UC Agriculture and Natural Resources (UC ANR), the Energy Department's Joint Genome Institute (JGI) and that agency's Pacific Northwest National Laboratory (PNNL).

"We very carefully controlled the watering conditions, and we sampled over the entire developmental timeframe of sorghum, so [researchers] could actually use this data not only to study drought stress, but also to study plant development," Lemaux said.

"That was interesting, because it hinted that the plants were turning off these associations [with fungi] when they were dry," said John Vogel, a staff scientist at JGI and co-author of the paper. "That meshed well with findings that showed that the abundance of these fungi around the roots was decreasing at the same time."

This research was funded in part by the Department of Energy (DOE) grant DE-SC001408; the Gordon and Betty Moore Foundation grant GBMF3834; the Alfred P. Sloan Foundation grant
2013-10-27; L'Ecole NormaleSupérieure-Capital Fund Management data science chair and the DOE's Office of Biological and Environmental Research grant DE-SC0012460. Work conducted by the DOE Joint Genome Institute is supported by the Office of Science of the DOE contract DE-AC02-05CH11231.

UC Agriculture and Natural Resources brings the power of UC research in agriculture, natural resources, nutrition and youth development to local communities to improve the lives of all Californians. Learn more at ucanr.edu.

Two of Kearney's researchers, Jeff Dahlberg and Khaled Bali joined Dan Putnam of UC Davis in a trip to Pakistan to talk with Pakistani researchers, academics, and farmers about forage production. Pakistan has reached out to their expertise to help understand improved forage practices that will help Pakistan meet its dairy and meat needs in the future. The three UC researchers gave presentations in Faisalabad and Multan at the Agricultural Universities. Dr. Putnam gave presentations on alfalfa, Dr. Dahlberg on sorghum as a forage, and Dr. Bali on irrigation and evapotranspiration. Their Pakistani hosts were very gracious and appreciative of their efforts. While there, they also participated in a fabulous tradition at the Ag Universities, planting of a tree in each of their names. The Kearney and Davis researchers look forward to strengthening these new relationships between Pakistani scientists and those of UC and ANR.

Jeffery Dahlberg, director of UC ANR Kearney Agricultural Research & Extension Center (KARE), specializing in plant breeding and genetics, is working with drones to collect data for one of his sorghum programs. Work will continue the development of field scale drought nurseries at both KARE and West Side Research & Extension Center (WSREC) under a DOE ARPA-e funded project that utilizes drone technology to phenotype sorghum lines on a weekly basis as they are stressed under pre- and post-flowering drought stress. Research will continue this coming summer to gather additional phenotypic data, along with heat stress measurements and soil moisture monitoring. These nurseries are part of an effort to identify genes that are expressed under different field stress conditions and relate them to sorghum's ability to withstand and recover from stress.

If you are interested in learning how to use drones for research and land management, you may want to explore attending the UCANR Informatics and GIS Program's  Dronecamp July 25-27, 2017 at UCANR in Davis, Calif., the application period is March 1 – April 15, 2017. Dronecamp costs $500 for UC affiliates (UC employees and enrolled students), and $900 for non-UC participants. Dronecomp is designed for participants with little or no experience in drone technology, and want to learn how to use drones for mapping applications. The intensive workshop covers drone science; safety and regulations; mission planning; flight operations; data processing; data analysis; visualization; and the latest trends and technology. Read more. 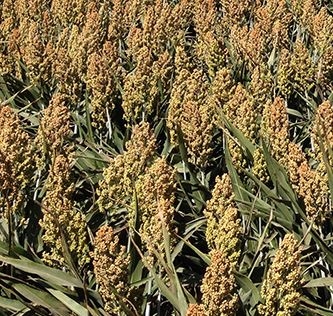 The U.S. Grains Council sponsored a team of managers from leading dairies in China to visit local dairy operations in California, discuss feed and nutrition issues, and to attend the World Dairy Expo in Chicago. The team, made up of nutritionists, farm managers, and general managers met with Jeff Dahlberg, Director of the Kearney Agricultural Research and Extension Center, and sorghum expert to discuss the potential use of sorghum forages and grain for dairy feed. Dahlberg spent several hours providing the delegation with a field tour and lecture on “what is sorghum” and its potential use as a low input, low water source for nutritious dairy feed. Dahlberg is investigating the potential of sorghum for dairies in California and information about its potential and evaluation of potential commercial sorghum forage hybrids can be found at sorghum.ucanr.edu. 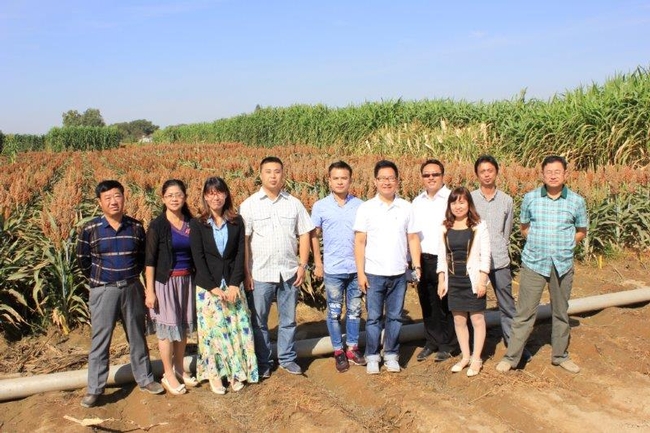