UC research on pedestrian orchards at Kearney featured on the local news.
Published on: August 15, 2014

For the past 17 years, Kevin Day, a UC Cooperative Extension farm advisor for Tulare County, and Ted DeJong, UCCE specialist in the Department of Plant Sciences at UC Davis, have been comparing the quality of fruit on conventional peach and nectarine trees and smaller trees grown on size controlling rootstock, reported KSEE Channel 24 news and KMJ Farm Report in Fresno. The impact of plant spacing and limb training were also assessed.

The goal is to have trees below 8 to 9 feet with traditional scion cultivars on size controlling rootstock. With reduced yield per tree due to the size, the distance between rows and trees in the row can be reduced to get the same or  higher yield per acre. Controller 9 is currently being planted commercially. Farmers can get some yield the second year after planting.

Listen to a podcast of the KMJ Farm Report with the story on the peaches and nectarines on 8/12/2014 located at 44:30 minutes into the podcast. 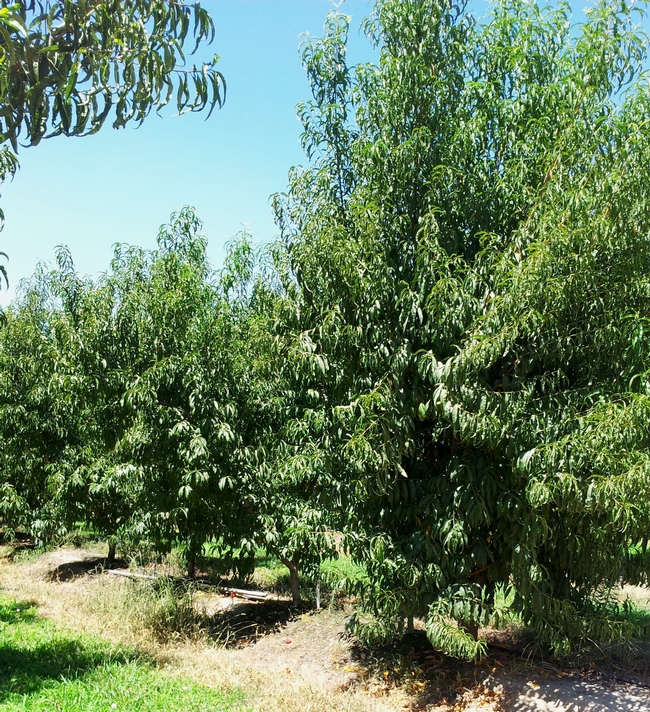 A newly redesigned website, the UC Fruit Report, was launched at the beginning of 2012 with comprehensive information for Central Valley tree fruit producers. The website contains research and photos that three UC Cooperative Extension advisors and specialists developed and collected over the past 30 years.

Website visitors will find useful horticultural information about establishing and managing fresh market peach, plum and nectarine orchards. UC pomology specialist Scott Johnson, who is based at the Kearney Agricultural Research and Extension Center, devoted half of his year-long sabbatical in 2011 to aggregating the information online.

“The website has a lot of information that will help farmers,” Johnson said. “If they’re seeing symptoms on their leaves that they think is a nutrient deficiency, they can go into the site and look at pictures and compare. If they’re planning future orchards, they can go through 35 different rootstocks, from dwarfing rootstocks to those that are resistant to certain diseases.”

The basic information on the website is concise and easy to read. The entries include links to detailed research reports for those who wish to explore the topics further.

“For example, if we’re seeing a problem with mites,” Johnson said. “We can put that up on the web, where farmers can find solutions to the problem.” 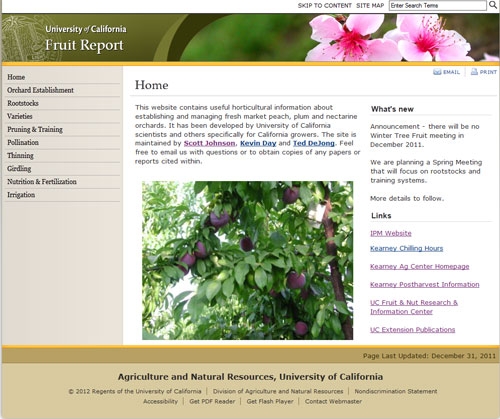