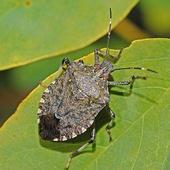 We have had reports from Swall Meadows down to Big Pine, and possibly an isolated case in Olancha. My hunch is they arrived from northern California, not down south, but there is no way to tell for...