The Stanislaus Sprout
sitenum=457
A blog by the UC Master Gardeners of Stanislaus County
UCANR: Protecting California's natural resources
What the Master Gardener Program Has Taught Me
Published on: July 6, 2022

One of my favorite things about being a Master Gardener is that I never stop learning about gardens, plants, and insects. Talking to 2022 Stanislaus County Master Gardener program students, who were wrapping up their 18-week course, caused me to reflect on what I have learned. Two of the most valuable pieces of knowledge is whenever I have a garden issue I know where to go for help and information, and to avoid using pesticides whenever possible while letting beneficial insects help manage unwanted pests. The following incident in my garden is an excellent example. . . My first step was to go to the University of California Agricultural and Natural Resources Integrated Pest Management Program (IPM) website to possibly determine what the manzanita plants had.  IPM is a wonderful resource with a wide range of links with information on science-based home, garden, turf, and landscape pest management. http://ipm.ucanr.edu/

After doing some exploring on IPM I learned the plants probably had Manzanita leafgall aphid (Tamalia coweni).  I knew of galls caused by tiny wasps existing on some trees such as oaks but learning that some aphids can cause galls was new and fascinating knowledge to me! Manzanita leaf galls.
I wanted confirmation the manzanitas did have leafgall aphids. A local source of assistance is the Help Desk which you can contact via phone, fill out a form online on their website, or go in person at the Agriculture Center with your gardening questions. On Wednesdays from 9am – 12 noon someone is at the Help Desk whom you can call. The Help Desk is a part of the UC Continuing Education Master Gardeners of Stanislaus County's website.

This website also includes links to the Stanislaus Sprout which is a weekly blog packed with information, upcoming classes and workshops, and gardening publications. https://ucanr.edu/sites/stancountymg/ Manzanita leaf gall aphids and castings viewed through a loupe.
I contacted the Help Desk, sending them a description and photos. The response I received confirmed what I suspected. My manzanitas did indeed have Manzanita leafgall aphids. What could I do to control the aphids? The Help Desk referred me back to the IPM information on the insect for possible solutions. Another source of IPM information was on aphids. I learned the life cycle of the leafgall aphids which appear only on manzanita, are prevalent on new growth, and while the aphids are not attractive, they do not appear to significantly affect the manzanita bush's health.

One IPM solution given was to avoid frequent irrigation or with excessive amounts of water. Once manzanita plants are well-established, they thrive with less frequent watering, so I was already not watering them often. Pruning was not recommended since it would stimulate new growth, which could attract more aphids, though I did remove leaves with the galls on them. Opened manzanita leaf gall with aphids inside. (Jack Kelly Clark, UC IPM)
One recommended way of reducing aphids' population is occasionally hosing off the leaves. However, I observed several lady beetle larvae and paper wasps on the plants, both of which are beneficial insects that feed on aphids, which I did not want to possibly wash off. To protect the beneficial insects, I also decided not to apply any pesticides unless the situation got worse. Since the infestation did not seem to seriously harm the plants, I decided to watch and wait, checking the plants a couple times a week. Within two weeks the aphids were gone, there were no new galls, and the manzanita plants looked healthy.

Take Advantage of These Resources

You do not have to be a Master Gardener to take advantage of the science-based resources I have discussed, the Integrated Pest Management website and the Stanislaus County Master Gardeners' Help Desk. They are available to all, not just to Master Gardeners. Like me, you can continue to learn new information that you can apply to your garden!

Denise has been a Master Gardener since 2020. All photos taken by Denise Godbout-Avant unless otherwise noted. January has always been my least favorite month of the year. The often dreary, short, gray days seem especially dull after all the December festivities. Going outside to work in my garden is a chore when I'd rather be snuggled under a blanket with a good book in front of a fire with a hot drink. However, there are many important gardening chores that should be done during the cold winter days.

UC's Integrated Pest Management (IPM) Home, Garden, Turf and Landscape Pests Quick Link has a Seasonal Landscape IPM Checklist which is a wonderful resource with monthly checklists within your selected county/region to help guide you how to keep your landscapes healthy.

Topics include common pest problems to look out for, preventative measures, and links to more information. You can also subscribe to receive an automated monthly list by email.

I reviewed the December and January checklists for Stanislaus County. The following are some topics listed and additional appropriate links:

This compilation is a partial overview of the lists I reviewed. Check out the January seasonal landscape checklist for your area to see which tasks you need to do. Then bundle up, get your garden tools, and go outside (preferably on a sunny day!) to do the necessary winter maintenance chores in your garden. You and your landscape will be rewarded for your cold weather efforts come spring. 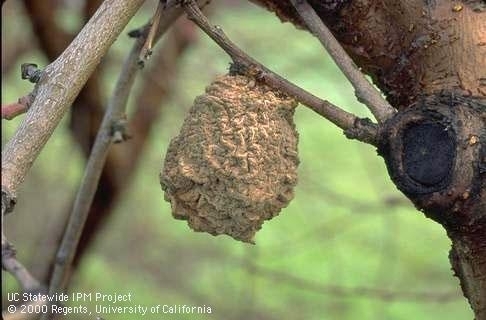 Vegetable garden. (Larry Bacon)
Everyone loves home grown tomatoes and other vegetables like peppers, corn, and squash. But pests like them too. If you are seeing insects, diseases, and other problems in the garden and wondering what to do, we have a class for you!

Take our Pest Management in Vegetable Gardens class to learn how to identify pests and manage them using less toxic solutions. You'll also learn how to recognize beneficial insects, too. Male longhorned bees sleep in flowers at night. (Kathy Keatley Garvey)
Ready to learn more about pollinators? If you took our Virtual Native Pollinators class, you learned about the local native bee pollinators and hummingbirds you might see in your backyard, and what kind of plants they prefer.

Planting for Pollinators will focus on native and compatible non-native plants that thrive in our area, and which pollinators have been documented visiting these plants.

It can sometimes be hard to spot these pollinators, so our speaker will tell us what time of year to look for them, and which plants to use to attract them.

Our speaker has many years of experience planting native plants and observing the pollinators that visit. She will combine her observations with research on what insects to expect on specific plants. About the speaker:
Ellen is a professional Horticulturist specializing in beautiful, heat tolerant, reduced-irrigation plantings that thrive in landscapes in the Central Valley of California. Most recently she has been exploring her passion for Pollinator Gardening and how it can contribute to biological diversity in urban and suburban California landscapes. It's been a buggy spring and summer in my new garden, where I've encountered varieties of scale, aphids and flies I hadn't experienced before. About 18 months ago we moved to a new house in a new neighborhood.  With some exceptions, the general goal for our new, smaller garden was to plant drought-tolerant, pollinator-friendly plants, use California natives whenever possible, and encourage beneficial insects. Oleander aphids on a milkweed stem. (Kathy Keatley Garvey)
This spring I planted milkweed seeds obtained from the La Loma Native Garden in Modesto. In May, I discovered the now 6-inch-tall plants were covered from top to bottom with orange-yellow aphids! I learned they are called oleander aphids which are a common pest of milkweed. The leaves of the milkweed looked as if they had white spots all over them.

According to UC Integrated Pest Management (UC IPM), aphids are small, soft pear-shaped bodied insects with long legs and antennae, with slender mouthparts used to pierce stems, leaves and other tender plant parts to suck out plant fluids. The site recommends first attempting to control aphids by washing them off with a gentle stream of water. I did this over several mornings and evenings, with my hose set on fine spray, washing both the top and underside of the leaves. After about a week, I still had quite a few aphids, so I sprayed an insecticidal soap, making sure I covered both the top and bottom of leaves. Aphids produce many offspring, so they required an additional treatment. Black scale. (Jack Kelly Clark)
I brought with me from the old house three pots of cyclamen plants given to me by former students.  These plants were the source of my first insect attack during the spring, which was soft scale.  I've had these plants for 15-20 years have never had a bug problem.  One pot was particularly hard hit with leaf tips appearing browned and wilted, often dropping off.  A sticky honeydew also appeared. Unlike hard scale, which I've experienced with olive trees, where the insect is underneath an armored cover and do not produce honeydew, the soft scale surface is the actual body wall of the insect and cannot be removed.

Soft scale is a sucking insect, appearing as tiny dots on the leaves or stems of a plant. They can grow up to ¼ inch long and have a smooth, cottony or waxy surface. They feed on the sap of the plant and excrete sticky honeydew, which can attract ants.  Mine were brownish-yellow with a waxy color, usually appearing on the underside of the leaves.

I removed badly damaged leaves, checked undersides of the leaves for the scale and scraped off any scale I found using a wet Q-tip.  I also checked my other two plants and occasionally found a scale or two on them, scraping them off also.  I repotted the infested plant with potting mix. Over time I was able to completely get rid of the soft scale. Greenhouse whiteflies and nymphs. (Jack Kelly Clark)
My final insect encounter was with whiteflies. I've been planting bulbs the past few years, planting dahlias for the first time this spring, which started to bloom in June. The whiteflies showed up in July, particularly infesting the two large white dinner-plate dahlias. The leaves on the plant became mottled yellow. Another sap-sucking insect, whiteflies are not true flies, but are related to aphids, scales, and mealybugs. Adults are tiny insects with a white wax covering on their wings and body. I spent a week trying to wash the whiteflies off with a heavy mist spray of water both on the top and bottom of leaves twice a day, but, it didn't manage them well enough. I switched to spraying on a weekly basis with an insecticidal soap, thoroughly covering both the top and bottoms of the leaves, which has reduced the infestation to a manageable level. Since these dahlias are annuals, not being able to completely eliminate the whiteflies is acceptable in my view.

It has been an educational summer learning about these insect pests and dealing with their infestations. I'm gratified I've been able to manage them using less toxic pesticides that are less harmful to beneficial insects and the environment. You can learn more about less toxic pesticides such as insecticidal soaps and oils by visiting the UC IPM website or by watching this video.