As someone who has studied forest health for a while, I have developed the rather unfortunate habit of noticing only the red and brown canopies that appear in a sea of green (my wife says it makes visiting the forest with me rather depressing). Unfortunately, the tell-tale sign that a tree just died has become a common sight in the coastal forests over the past few years. While there is a suite of forest health issues (invasive species, fire suppression, and climate change to name a few) that are likely driving this decline and dieback, there is one that I am currently most concerned about: Drought. An interior live oak that recently died - MJones
Many of the native tree species that occur in the coastal forests are well-adapted to drought and have an incredible ability to survive and persist through hot and dry seasons. But the persistent and severe drought conditions are worsening already widespread forest health issues and resulting in new insect and disease outbreaks. This certainly includes the things we know are already causing mortality, like sudden oak death. More recently, tree species and forest stands that have been relatively unimpacted to this point such as ponderosa pine and oak woodlands are starting to show signs of stress. While tree mortality is an inevitable and important part of dynamic and healthy forest, the extent of decline and dieback over the past few years and especially starting this spring has become concerning.

I noticed the first signs that drought stress was becoming an issue in early spring, when ponderosa pine began to die in eastern Mendocino County. Upon investigation, I found extensive western bark beetle and red turpentine beetle activity. I suspect the insects had established in fire stressed trees and their populations had built up over the past few years, to the point where they were spreading to trees that had no or little fire damage and into areas where there had not yet been wildfire. My colleagues and I have now observed ponderosa pine morality from northern Mendocino to northern Napa. It would seem we are at the initial stages of a western pine beetle outbreak, and I would suspect we will see a significant increase in pine mortality throughout the summer and into the next year.

Another conifer I have been getting questions about recently is Douglas-fir. Over the past few years there has been noticeable Douglas-fir decline and mortality, especially in young trees that have encroached into oak woodlands and rangeland. While this is an indication of unhealthy forests and stressed trees, I do not necessarily see this as a serious forest health issue since the expansion and growth of Douglas-fir in high densities into other habitats is the result of forest succession in the absence of fire. So, in my opinion the decline of some of these trees is a natural process resulting from the stress of growing on low quality sites and competing for water and nutrients, resulting in insect and disease infestations. Drought further increasing water stress and accelerates the rate of decline and dieback. However, I have yet to see extensive Douglas-fir mortality in high quality sites such as north facing slopes with moist, mild climates.

The next significant sign that drought stress was becoming an issue was the decline and mortality of interior live oak and CA Black oak in southern Mendocino County (Hopland). Upon investigating several clusters of declining trees, I found that the mortality was not associated with sudden oak death, but instead appeared to be caused by outbreaks of western oak bark beetle, a native bark beetle that is attracted to stressed trees. While many of the declining trees have extensive evidence of the bark beetle activity, several trees have only a few galleries, but were covered in cankers which are indicative of foamy bark canker, a disease caused by a pathogen the bark beetle vectors. While I have only observed this decline in the Hopland area, western oak bark beetle is found throughout California and could easily outbreak in other areas where oaks are highly drought stressed. Additionally, other native oak pests such as twig blight, branch canker, pit scale and invasive pests such as sudden oak death and Mediterranean oak borer are becoming more common in drought stressed trees throughout the Coastal Range.

What can we do about forest health and the drought? Many of the pests I mentioned are native and are simply acting as natural disturbances that help cull stressed and dying trees and begin the process of nutrient cycling. While eradicating pests or preventing them from infesting trees is extremely difficult, their populations can be controlled by pruning or removing and destroying heavily infested material. Suppressing insect and disease populations will not prevent all tree mortality but can help mitigate outbreaks that could spread to relatively healthy trees.

Thinning is another way to help the forest gain resiliency to drought. It can improve tree vigor through the reduction of competition and increase access to water and nutrients. But, when thinning is not an option, such as in an oak woodland or savannah and trees are still showing drought stress, then hopefully the drought adaptations these trees have evolved will be enough to help them survive.

For more information check out the UCCE Mendocino – Forest Health webpage at cemendocino.ucanr.edu. Also, feel free to contact me if you have questions, mjones@ucanr.edu or (707) 463-4495. 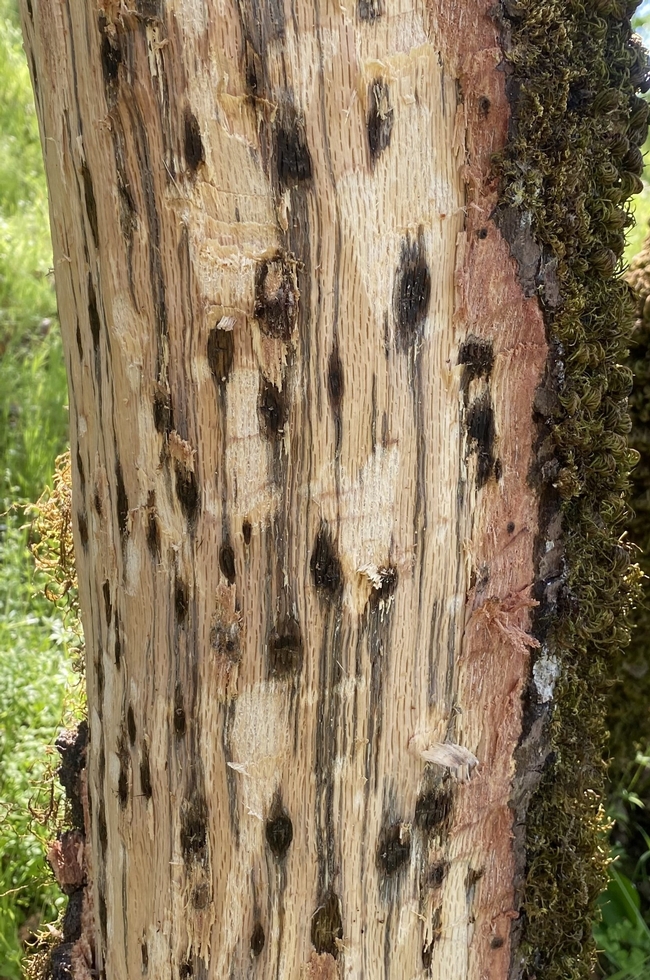 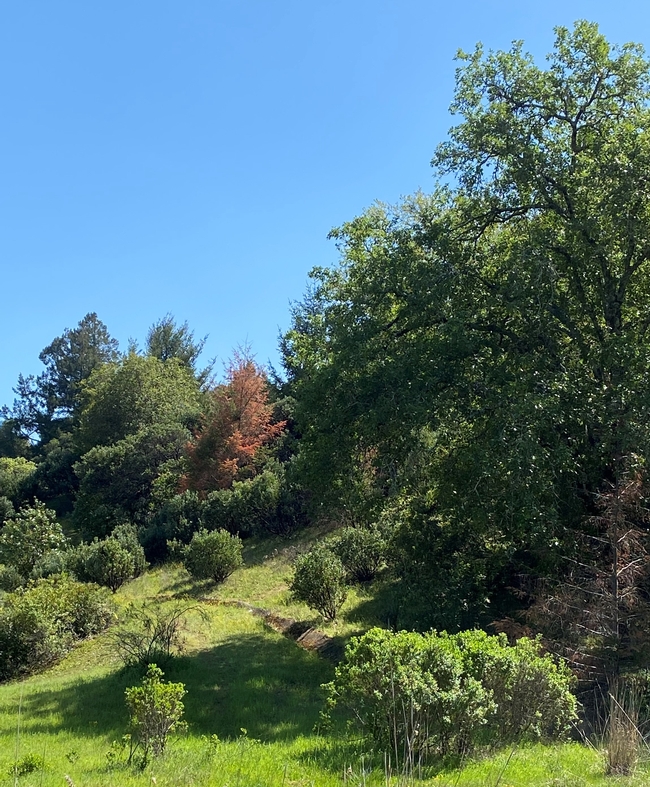 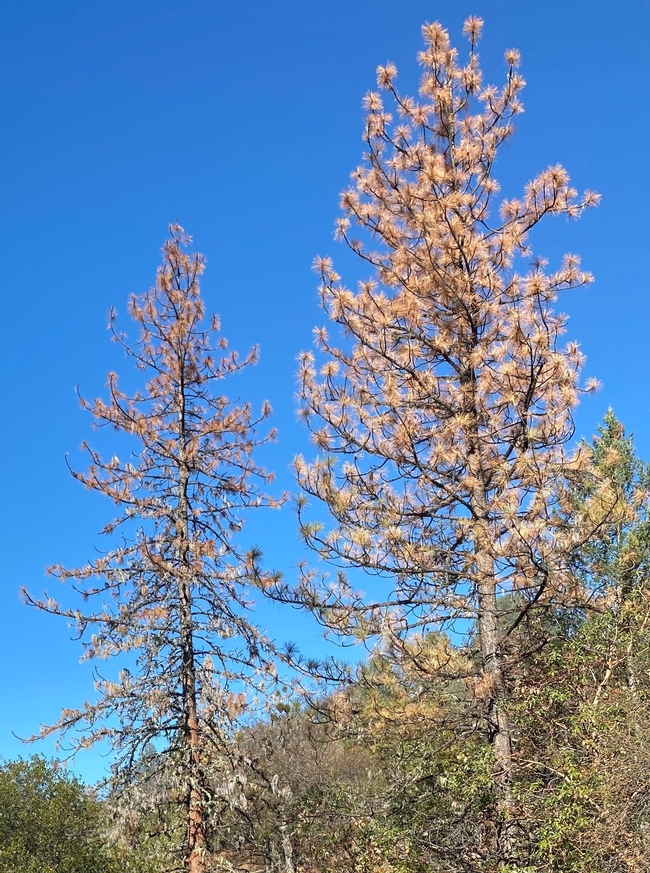 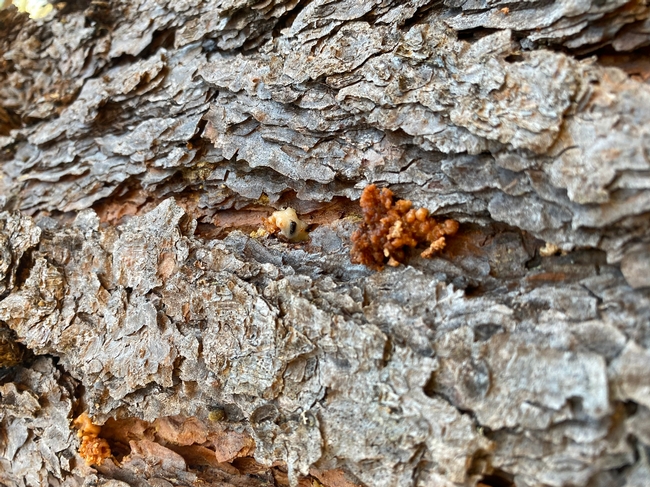 The Mediterranean oak borer (Xyleborus monographus), or MOB, is an invasive ambrosia beetle that was first collected from declining oak trees (Quercus spp.) near Calistoga (Napa County) in 2019 (Fig 1). Subsequently in early 2020, the beetle was detected in the neighboring counties of Lake and Sonoma, and more recently a separate infestation was discovered in suburbs near Sacramento. MOB is native to the Mediterranean regions of Europe, the Middle East, and North Africa and was likely introduced to North America in infested wood material. Within its native range MOB is a pest primarily of dead and dying oaks. In California, MOB has been detected in valley oak (Q. lobata) and blue oak (Q. douglasii). Given the cryptic nature of the insect, the extent of the infestations, and presence of dead trees with evidence of the beetle, the insect has likely been in California for more than five years.

Ambrosia beetles are interesting insects because they carry symbiotic ambrosia fungi which they cultivate along their galleries (boring tunnels) for food. Most ambrosia fungi are weak pathogens (typically only colonizing the tissue near the galleries), but a fungus associated with MOB, Raffaelea montetyi, appears to cause wilt disease in cork oaks in Portugal. This fungus and several others associated with MOB, have been recovered from infested trees in California and research is underway to determine if these ambrosia fungi could cause similar diseases in North American oak species. Figure 2. The main stem of a declining valley oak infested with MOB.

MOB appears to initially attack the canopy of host trees where it kills branches, with persistent infestations spreading to the main stem and eventually killing the tree (Fig. 2). The extensive network of MOB galleries can weaken trees and make them more susceptible to failure. Thus far, trees in California with MOB infestations appear to have been stressed by other biotic and abiotic factors prior to MOB colonization, so it is unclear if the insect and its ambrosia fungi can infest and kill healthy trees.

Signs of MOB infested trees are declining canopies, tiny exit holes and boring dust in cracks of the bark, and occasionally sap flux; however, these symptoms could be caused by other boring insects or diseases. The best way to detect MOB infested trees is to observe the pattern of canopy decline. MOB begins by colonizing a large branch in the upper canopy, so newly infested trees will often have one declining branch while the rest of the canopy appears healthy. As the infestation progresses, the entire canopy begins to decline and in some instances, heavily infested branches can produce extensive epicormic sprouting with leaves diminished in size and densely clustered (sometimes referred to as “popcorn foliage”). The most reliable way to confirm MOB is from the architecture of its galleries, which are trellis-like, intersecting, and fan out in a single plane (Fig. 3A). These gallery patterns distinguish it from native Monarthrum spp. of ambrosia beetles, which have galleries branching from a single point and do not intersect neighboring galleries (Fig. 3B). These native beetles will only attack trees that are already dead, dying, or diseased.

Research is currently underway to determine the extent of the two infestations and to find effective management strategies to control MOB. From other similar invasive insects, such as the shot hole borer in southern California, options like chipping (≤1” size), solarization, burning, or burying infested material will likely be crucial in mitigating spread. However, since infestations can be cryptic for several years, there is significant potential for the beetle's range to expand as they can be moved in infested wood and are capable fliers. The best method of control is preventing the movement of the insect and its host material from known infested areas. For more information, please visit: ucanr.edu/sites/mobpc.

If you have a tree that you believe to be infested, please contact the California Department of Food and Agriculture: 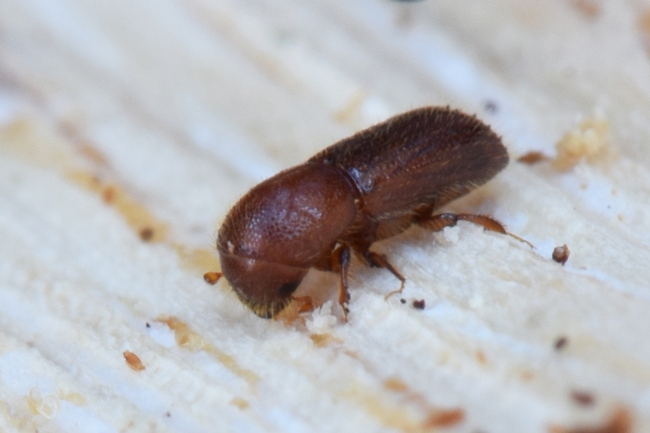 I joined UCCE on October 1, 2018 as the Forestry Advisor for Sonoma, Mendocino, and Lake Counties. I specialize in forest entomology with a focus on forest health and integrated pest management of invasive and endemic forest pests.

I completed a Ph.D. in Entomology from State University of New York, College of Environmental Science and Forestry and a B.S. in Environmental Biology and Management from UC Davis.

Prior to joining UCCE, I was a Research Project Assistant (graduate student) at State University of New York. I developed and maintained research projects on delimitation, management, and biological control of the invasive forest pest emerald ash borer in New York. From 2010 to 2013, I was a research associate in the Department of Entomology, UC Davis in collaboration with the US Forest Service, Forest Health Protection in southern California. I participated in a variety of forest pest research projects involving the detection, evaluation, and management of native and invasive forest pests, including goldspotted oak borer. I have been active in leading training activities for land managers and owners in the field identification and management of forest pests, and training and supervising field crews in the collection of forestry data. My journey in forest health started as an undergraduate at UC Davis, where I worked on sudden oak death in the department of Plant Pathology. My experiences in forest health, ecology, and management have given me the skills to be of service to land owners and managers who want to practice good forest stewardship with a focus of creating healthy and resilient forests, not only against insects and disease, but also fire. I intend to expand and advance my skill-set to help land owners and managers with forestry related issues unique to California and across all sizes of forested land, be it from a few trees to a large forested area.

I moved to the town of Sonoma in high school and have been fascinated by the area ever since. My family goes back eight generations in California, and I feel very fortunate to be able to move back to the area (Healdsburg) to start my career. I look forward to working with Sonoma County, and helping land owners and managers deal with forestry challenges faced by the county, particularly after the fires of 2017, but also looking into the future.

Please feel free to contact me with any questions. I look forward to working with and meeting members of the Sonoma County community.