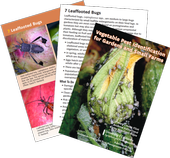 While working outside, gardeners and farmers may discover pest problems they need to answer quickly. To meet this need, the University of California Division of Agriculture and Natural Resources has recently published the Vegetable Pest Identification for Gardens and Small Farms card set.


This travel-sized guide is a convenient and quick way to keep a pest management reference in your pocket. The set of 53 full-color cards contains photos and information about common insect and mite pests as well as plant diseases, nematodes, abiotic disorders, weeds, and vertebrate pests. The cards focus on sustainable pest management for vegetables, melons,... 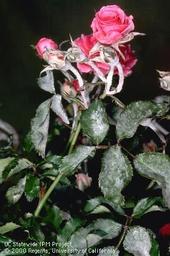 This time of year, you may notice a white, powdery looking growth on fruit, vegetable plants or ornamental plants in your garden. What is it? It could be powdery mildew.

Powdery mildew is caused by several different fungi that may attack plant leaf surfaces, shoots, fruits, and flowers. There are several species of powdery mildew; all are spread by wind and thrive in shady areas when temperatures are between 60-80 °F. The fungi attack both new and old foliage, and can be a problem on certain plants. The disease usually occurs first on new leaves, before spreading to older parts of the plant. This is why over fertilizing worsens powdery mildew.

Many woody and herbaceous...