An entire chapter of my book, “Sowing the Seeds of Victory: American Gardening Programs of World War 1” is dedicated to WWI poster art and propaganda. Chapter Four contains numerous poster images and a detailed analysis of each. One of my favorite images is this one – Uncle Sam Says Garden”  - produced by the USDA.

“Uncle Sam Says Garden” was a poster that was directed to wider audiences than some of the other gardening posters, which were directed to children. Produced in 1917, it shows Uncle Sam in the foreground, holding a hoe in one hand, and papers that read “City Gardens” and “Farm Gardens” in the other. These words are clearly meant to synthesize the interests of rural and urban Americans: gardening was a shared activity, a common national goal. A man and woman work in the garden shown, which is in the shape of the American flag. Some of the plants featured in the garden might appear to be stars upon the flag. The woman in the poster wears a long, red skirt and a white shirt; in her arm is something she has harvested from the garden.

A subtitle suggests that Americans might wish to garden in order to “cut food costs.” Those seeing the poster are urged to write to the USDA for a free bulletin on gardening, suggesting, “It's food for thought.” The poster is framed by brown band, and the bottom right corner features a cluster of richly hued vegetables. Upon careful inspection, the background, featuring trees, actually bears a striking resemblance to leafy green vegetables and also to broccoli stems. The use of Uncle Sam in gardening posters was not as common as Columbia, and in this depiction, he is dressed in clothing covered with stars and stripes, and has a piercing game.

This poster offers a message that is still food for thought, don't you think?

“A Garden for Everyone. Everyone in a Garden.” 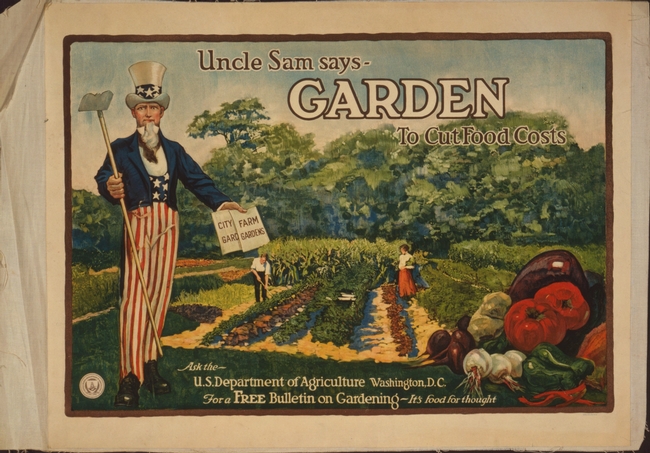 If you've read my blog before, you already know that Victory Gardens had their origins in WWI.  These gardens had important impacts on the homefront, not only because they produced much-needed food, but because they helped create a sense of common purpose and solidarity during a challenging time.  Victory Gardens were perhaps even more in the public eye during WWII, and again, represented a hugely successful mobilization of citizens on the American homefront.

But what about the importance of gardens to those most directly affected by war? There are documented accounts of German soldiers carefully maintaining gardens in trenches, of French soldiers planting flowers on the Western Front, of the importance of gardens/gardening to the recovery of hospitalized (and deeply traumatized) soldiers.  These kinds of stories, and more, are included in Defiant Gardens: Making Gardens in Wartime, written by Dr. Kenneth Helphand.  In his book, Helphand explores the significance of planting gardens against the backdrop of war.

“Gardens promise beauty where there is none, hope over despair, optimism over pessimism, and finally life in the face of death,” Helphand said. “In trenches, ghettos, and camps, defiant gardens attempt to create normalcy in the midst of madness and order out of chaos.”

Helphand's book is deeply moving - even profound.  Not merely a history, it is a call to consider how gardens can work in our lives, today.  Helphand makes me consider the challenges others have faced.  When presented with their persistence and dedication to gardening, even when faced with imminent death (as in the case of Jewish inhabitants of the Warsaw Ghetto), I am humbled and awestruck.

"A Garden for Everyone. Everyone in a Garden."