Extension entomologist Larry Godfrey, 1956-2017 (Photo by Kathy Keatley Garvey)
(Editor's Note: A memorial service is scheduled from 4 to 6 p.m., Wednesday, June 7 in the Putah Creek Lodge, located off Garrod Drive, UC Davis campus. Coordinating the memorial are his longtime friends and colleagues, Extension entomologist Frank Zalom, distinguished professor of entomology, and entomology project consultant Vonny Barlow, both of the UC Davis Department of Entomology and Nematology. Barlow, the third graduate student in the Godfrey lab (1997) and who holds a doctorate (2006) from Virginia Polytechnic Institute and State University (Virginia Tech), is assembling a slide show.)

DAVIS--UC Cooperative Extension entomologist Larry Godfrey, a 26-year member of the UC Davis Department of Entomology and Nematology faculty and widely known for his research on applied insect ecology and integrated pest management (IPM) strategies, died April 18, succumbing to cancer. He was 60.

Dr. Godfrey, born July 7, 1956, grew up on an Indiana farm. He received two entomology degrees from Purdue University, West Layfayette: his bachelor's degree in 1978 and his master's degree in 1980. He earned his doctorate in entomology in 1984 from the University of Kentucky, Lexington, studying with major professor Kenneth Yeargan. He was a member of Phi Beta Kappa, Phi Kappa Phi, Sigma Xi and Gamma Sigma Delta.

Said Yeargan: "As I stated in my letter of recommendation for Larry many years ago when he applied for the position at UC Davis, Larry was an outstanding 'synthesizer' of information. He had a knack for looking at a problem, thinking through all the ramifications, and coming up with logical, practical ways to approach the problem – and usually finding a solution.  He will be missed by many." It was at the University of Kentucky where Larry met his wife-to-be, Kris, then a postdoctoral scholar.

Funeral services will be held Saturday, April 29 in Salem, Ind.  In lieu of flowers, the family asks for donations to pet rescue groups or groups that support young people interested in entomology or agriculture. 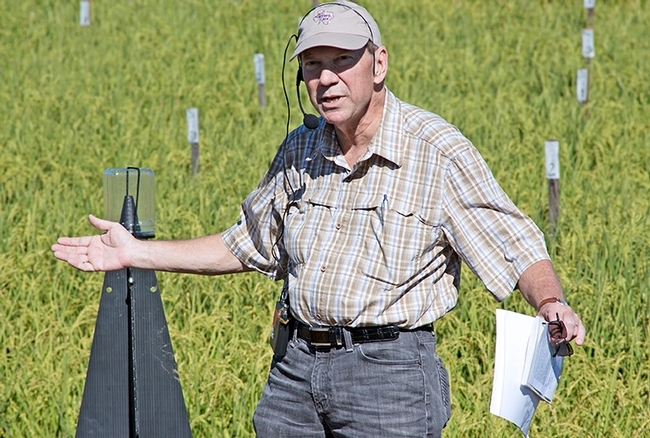