I received an extension question this week about controlling bamboo that I thought I'd share.

In essence, the situation was that one neighbor had a large stand of bamboo on the property line and, because it is a "running" rather than "clumping" type of bamboo, it was invading the other neighbor's side of the property line.   Bamboo neighbor likes the bamboo and the privacy afforded by the stand, other neighbor does not like bamboo creeping into their lawn and landscape.  The question was "how do I control the invading bamboo without killing the whole (clonal) stand?".

They had been cutting the invadors and spraying the shoots with glyphosate with little long-term effect.  This reflects the enormity of the root and rhizome system of bamboo - there is a LOT of stored reserves and a LOT of buds that can form new shoots.  (we see similar problems with other perennial invasives such as Arundo donax, cattails, scouring rush, field bindweed, etc).

From a herbicide standpoint, glyphosate is probably the most available and easy to use.  Materials with the active ingredient imazapyr (Arsenal, Habitat, others) are also supposed to be relatively effective but may have too much residual activity and broad spectrum for a situation in which other plants may be wanted.  More importantly, it would be nearly impossible to control only part of a clump with an herbicide - more likely an all-or-none situation.

I found a few links to suggestions for controlling bamboo that I'll post below.  Most of them suggested cutting the rhizomes to segregate the invasive portions from the mother plant, then digging and removing the rhizomes.  I'd also imagine that this strategy would greatly help the herbicidal efforts as you'd be trying to control a much smaller root/rhizome system.

To maintain the boundary, most of the links below suggest digging a shallow trench and clipping or cutting rhizomes as they cross this zone (bamboo DMZ?).  The trench could be open or filled with sand or loose material and then use a shovel or spade to periodically prune the invading area.  You could also build a barrier (plastic or similar) in the trench as most of the bamboo rhizomes are in the top 12 inches of soil.

Here's a few links from my 10-minute internet search (note: I do not personally know or endorse any of these sites, they are provided for info only):

On the other end of this situation, if you plant a running type bamboo (or other aggressive, spreading plants), think about where it might go in the future and how you can keep it where you intend it to be.  This will help keep the peace with your neighbors, as well as in your own landscape. 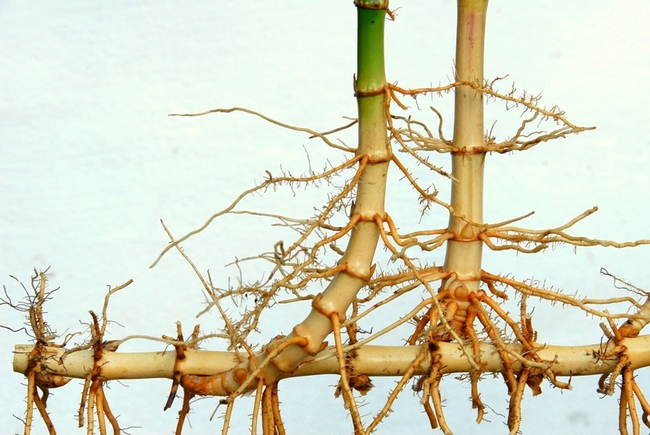