Bug Squad
sitenum=63
Happenings in the insect world
The Terminator Your mother laid an egg, you hatched into a caterpillar, and you're eating as much as you can before you spin into a chrysalis and then emerge, as a butterfly, ready to start the life cycle over again.

You are not aware of the European paper wasp, its long legs dangling, moving through the leaves and eating the newly laid eggs around you. The wasp lurks in the deep, dark shadows as you finish one bite and reach for another.

Then you see the predator coming after you.

It does not end well for you. You have become protein for the wasp to feed its young. A Gulf Fritillary nectaring on lantana. (Photo by Kathy Keatley Garvey)
You never had a chance to become a butterfly.

For several weeks now, the European paper wasps (Polistes dominula) have wreaked havoc on the Gulf Frit population on our Passiflora. Sometimes they pair up in twos, sometimes in threes and fours, and once a horde of five descended

They follow the fluttering butterflies as they touch down on a leaf to lay an egg. Then they eat the eggs, kill the caterpillars, and tear apart the chrysalids.

European paper wasps are relatively new invaders from Europe; they were first spotted in the United States in 1981 in Massachusetts. They are now colonizing the entire country, taking over the native wasps' territory.

There's good news and then there's bad news. If you like having European paper wasps around to prey on the larvae of hornworms, cabbageworms and tent caterpillars, then you may consider them beneficial insects. But if you're trying to rear a few butterflies, such as the Gulf Fritillaries (Agraulis vanillae), then they're Public Enemy No. 1.

Studies show that they can also be cunning.

According to an article out of Michigan State University: "A Cornell University researcher has found that certain female wasps, without nests of their own, 'sit and wait' for an opportunity to adopt an orphaned nest or hijack a nest from another queen. These sit-and-wait female wasps prefer to adopt the most mature nests, probably because these nests will produce workers the soonest, and colonies with workers are very likely to survive. Once a queen adopts a nest she will eat the former queen's eggs and young larvae and replace them with her own eggs. The older larvae and pupae, which belonged to the former queen, are allowed to complete development and may eventually help rear the adopting female's offspring. Ferocious hunters, paper wasps feast on caterpillars."

"The nests are usually founded by a single Queen or Foundress, who starts her nest in May having hibernated as a mated queen throughout the winter often in the company of all the other mated females from their parental nest."

Meanwhile, we figure that only about 10 percent of the Gulf Frit eggs will ever make it into butterflies--no thanks to assorted predators.

But a few will make it, and what spectacular butterflies they will be! 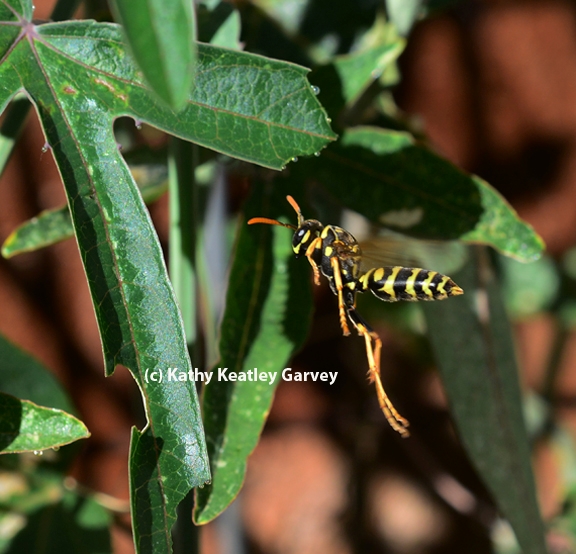 A European paper wasp on the hunt. (Photo by Kathy Keatley Garvey) 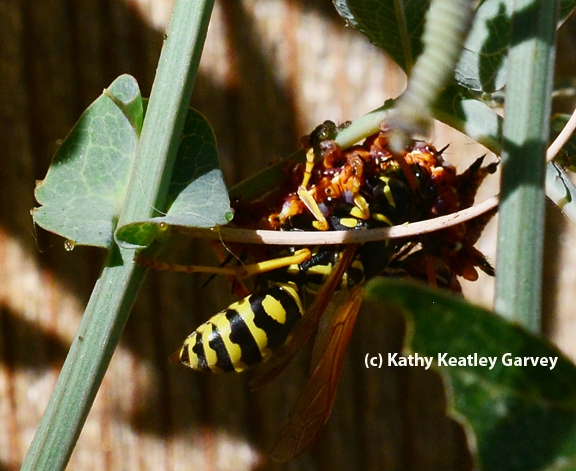 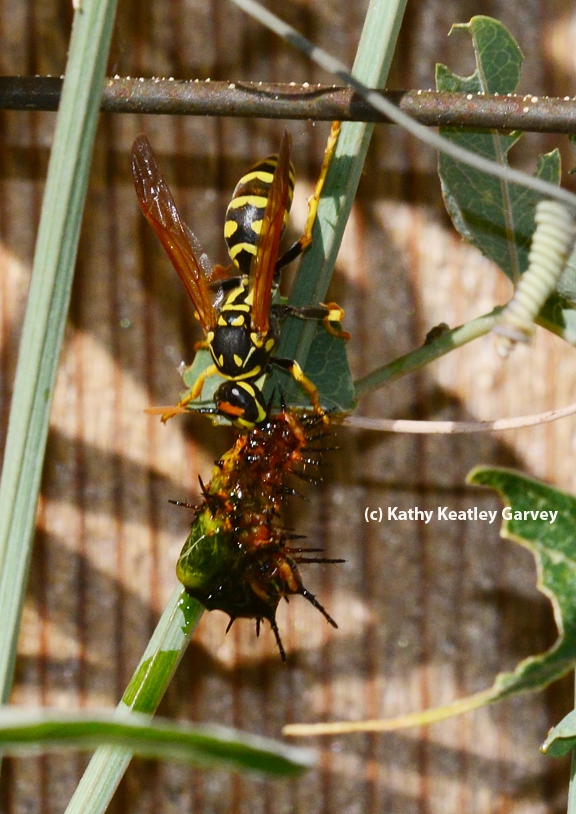