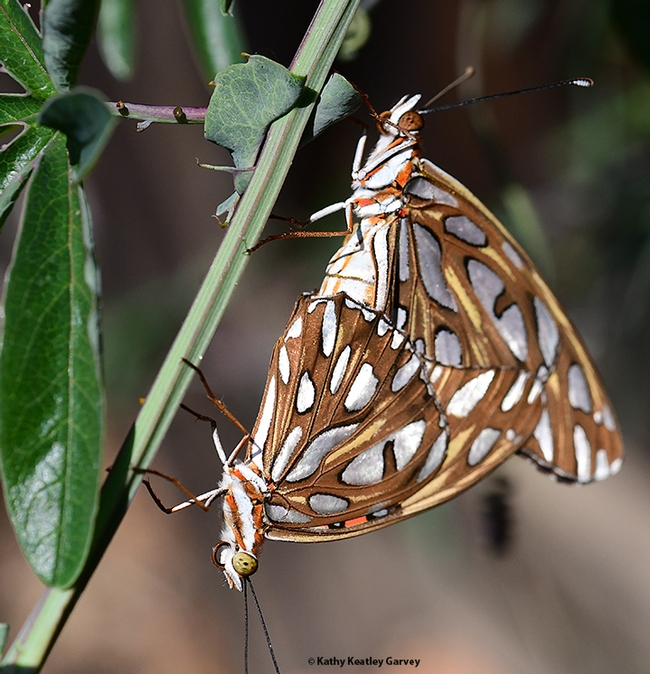 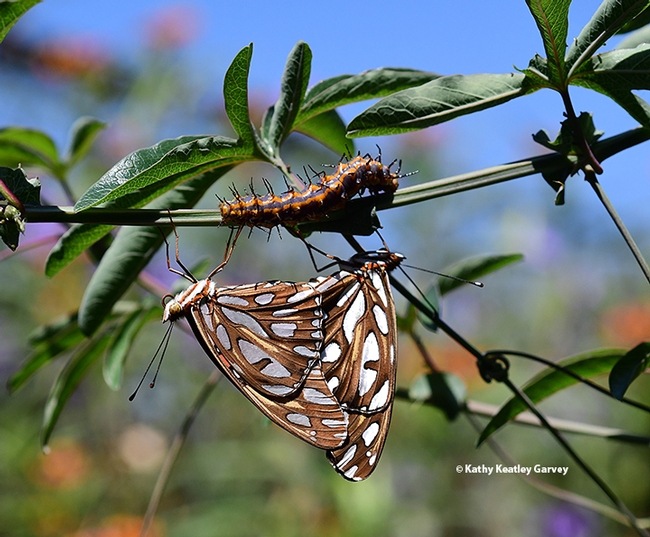 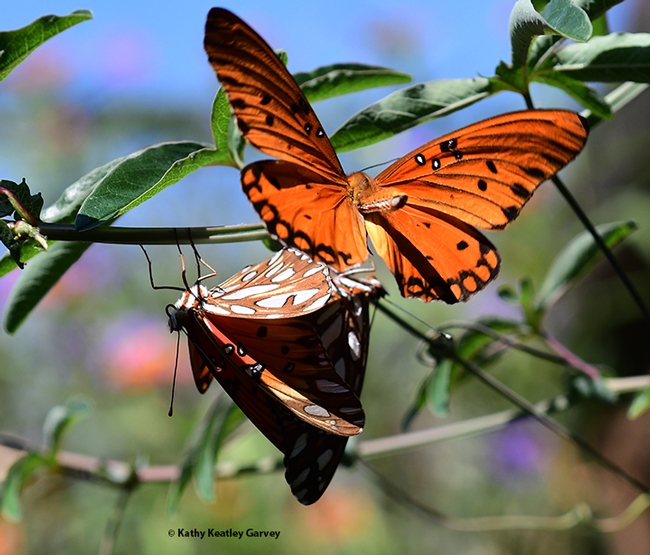 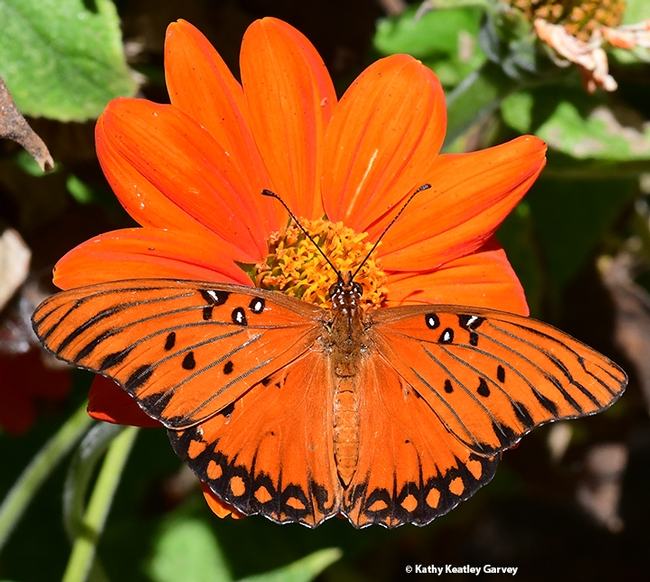 You know the drill, lay 'em on the tendrils.

But Gulf Fritillary butterflies, Agraulis vanillae, don't always lay their eggs on the tendrils of their host plant, the passionflower vine (Passiflora) although textbooks may indicate that.

We've seen Gulf Frits lay eggs on and under the Passiflora leaves, on the stems, on the blossoms, and on nearby fence posts and screen doors.

Hey, Gulf Frits, are you trying to tell us something?  Don't you like the accommodations?

But the other day, we saw a Gulf Frit executing acrobatic moves to deposit an egg on a tendril.  A little breakdancing, Lindy hopping, pole-climbing, scooting, rolling, hooping and juggling--and she's done.

The egg is tiny, bright yellow and pinpoint in size. It will probably hatch, but the larva or caterpillar may not make it.

Currently we have several California scrub jays enjoying an all-you-can-eat caterpillar buffet every morning. They sit on the fence, swoop down, grab a 'cat, and look for more.

There's always food in a pollinator garden. A Cooper's hawk that hangs out in the birdbath knows that, too. 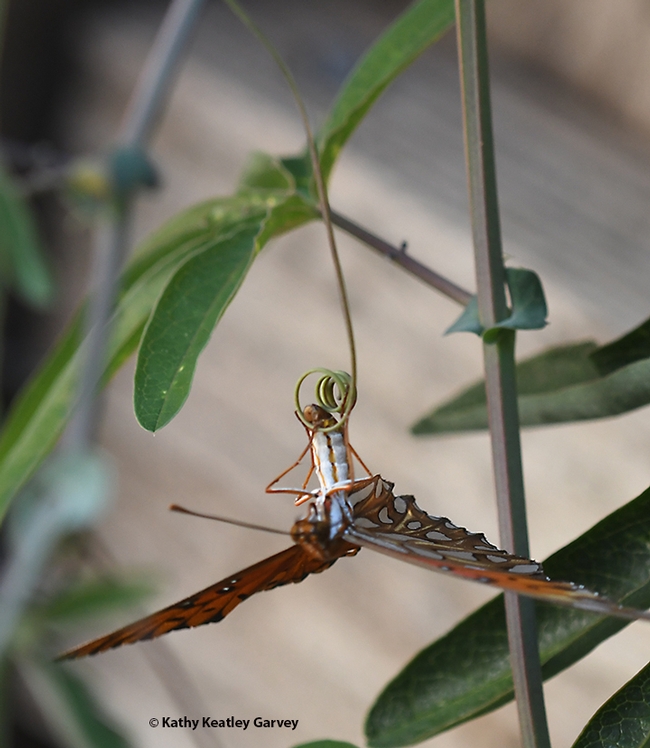 A Gulf Fritillary, Agraulis vanillae, depositing an egg on the tendrils of her host plant, Passiflora. (Photo by Kathy Keatley Garvey) 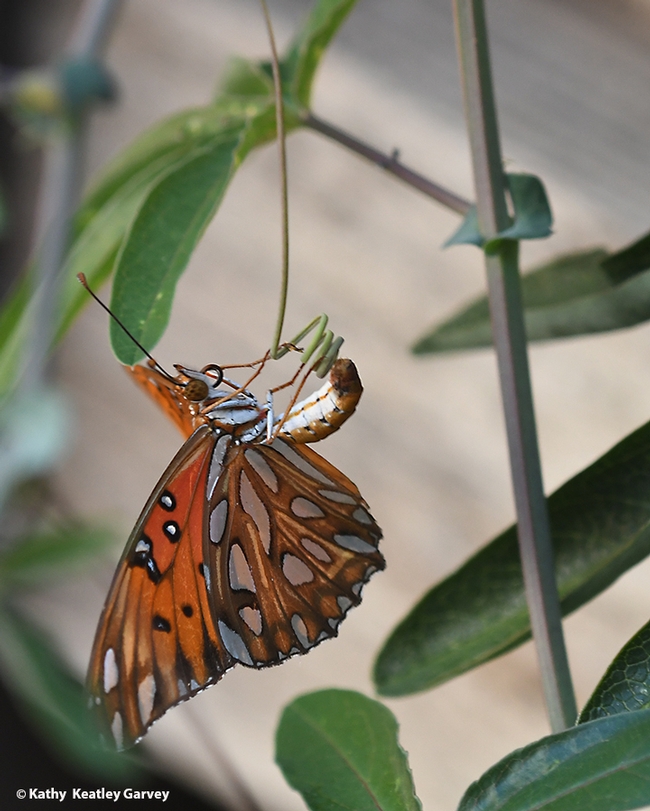 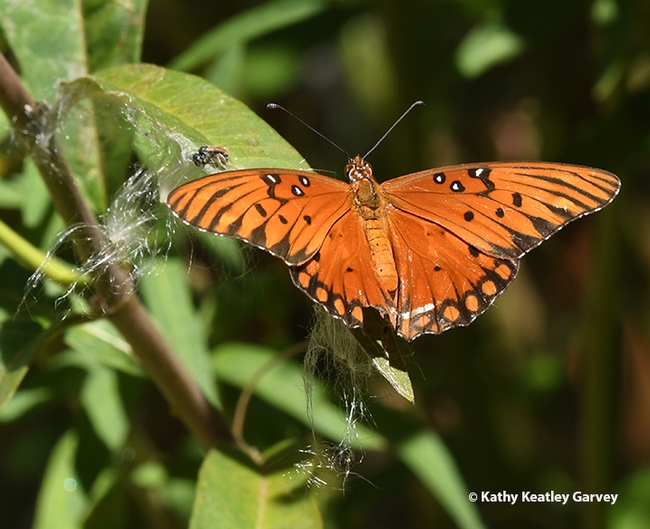 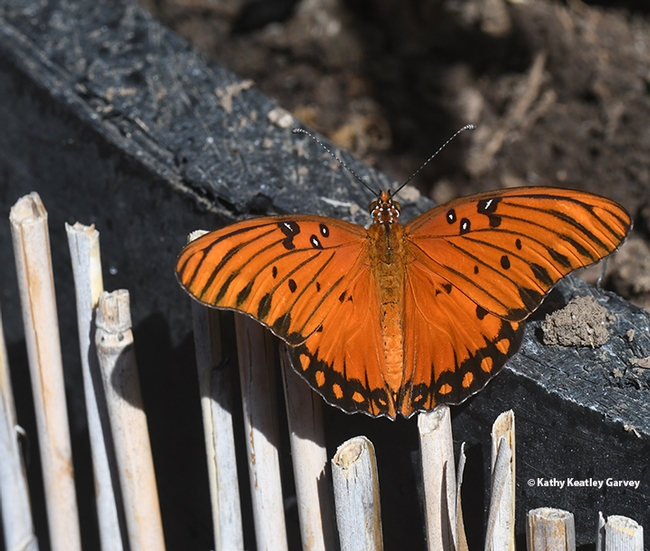 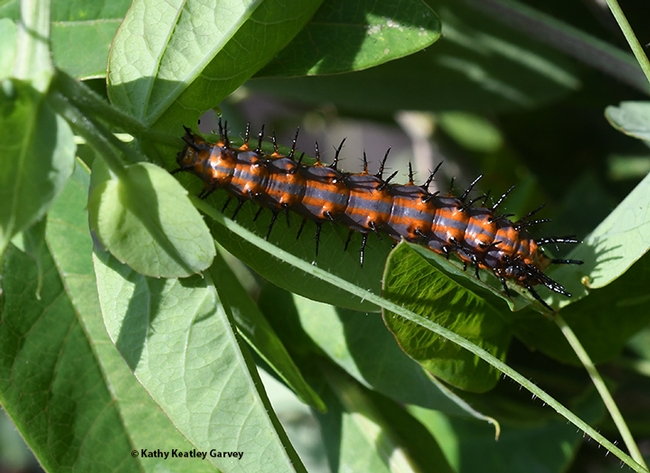 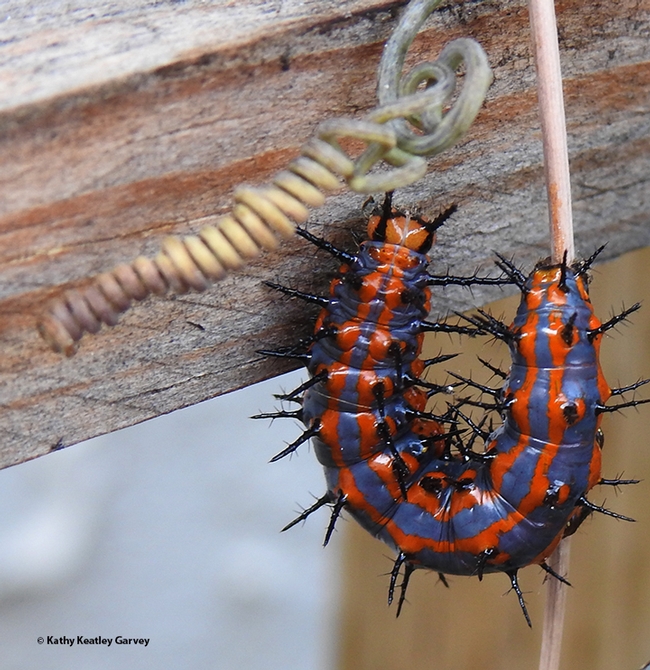 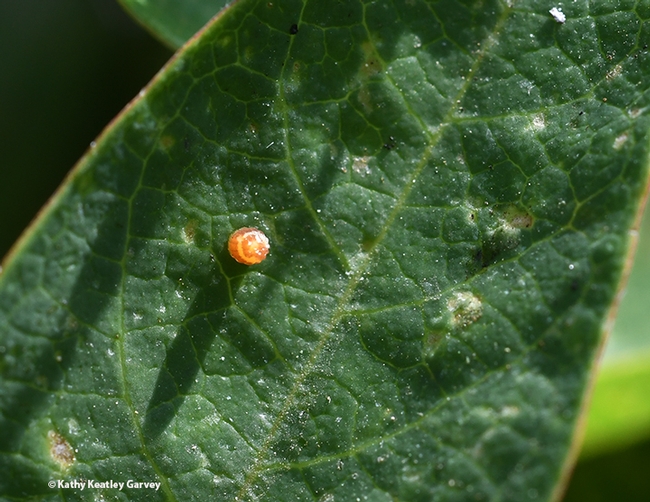 It's not often you see "passion on passion."

That would be the "passion butterfly"--Gulf Fritillary, Agaulis vanillae--on the blossom of its host plant, the passionflower vine, Passiflora.

You often see the males patrolling the vine and the females laying eggs on the leaves.

But have you ever seen one foraging on a blossom?

On sunny days in Vacaville, we're seeing it happen more and more.

The brilliant orange butterfly with the silver-spangled wings is one spectacular butterfly. Together the passion butterfly and the passionflower live up to their names. 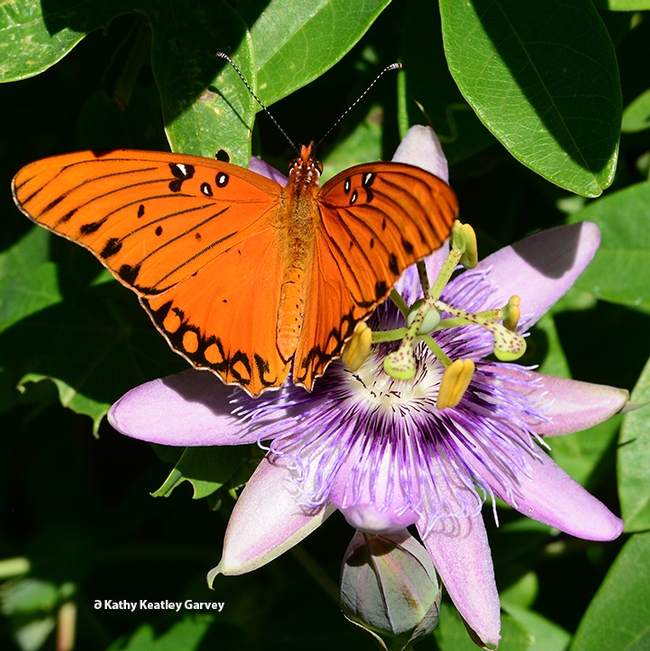 The Gulf Fritillary, Agaulis vanillae, spreads its wings on a passion flower in Vacaville, Calif. (Photo by Kathy Keatley Garvey) 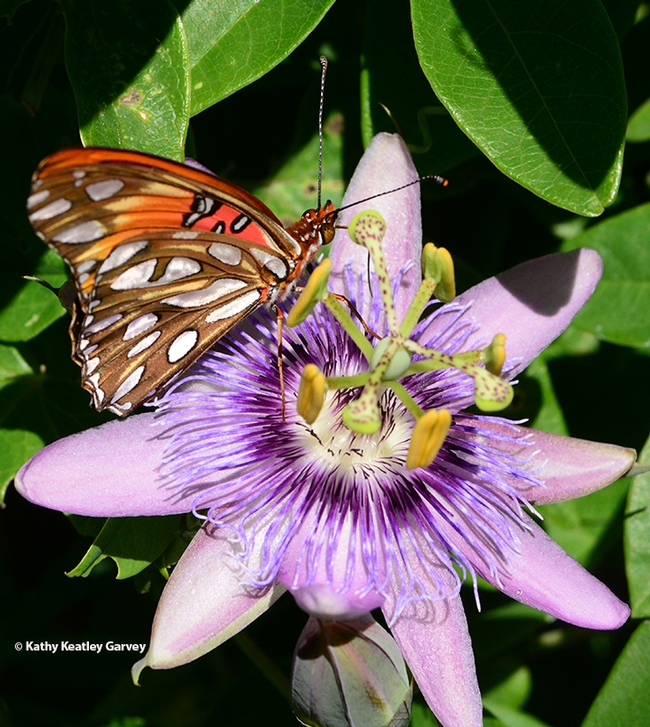 The orange butterfly has silver spangled wings, which makes it appear as two different butterflies. (Photo by Kathy Keatley Garvey) 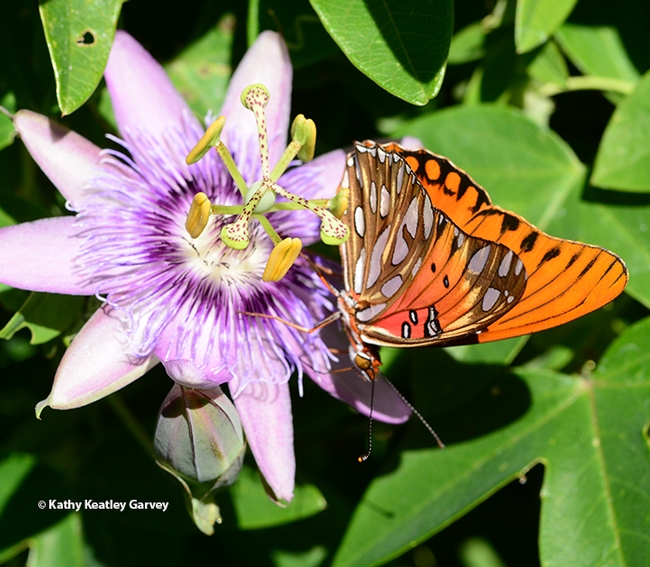 The Gulf Fritillary making the rounds of the passionflower. (Photo by Kathy Keatley Garvey) 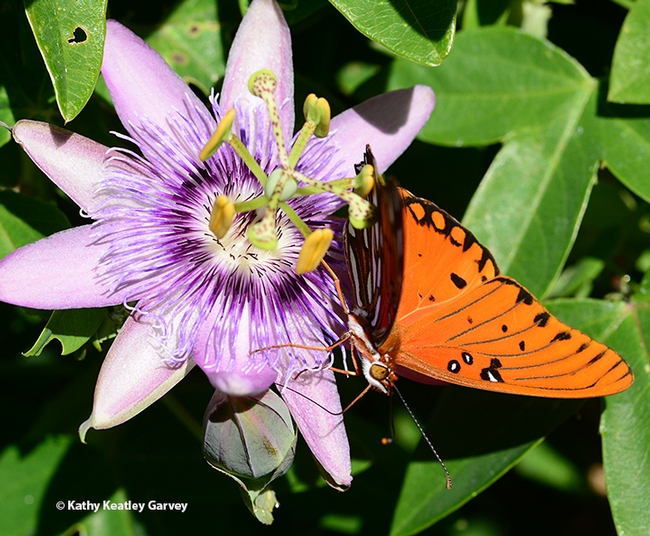 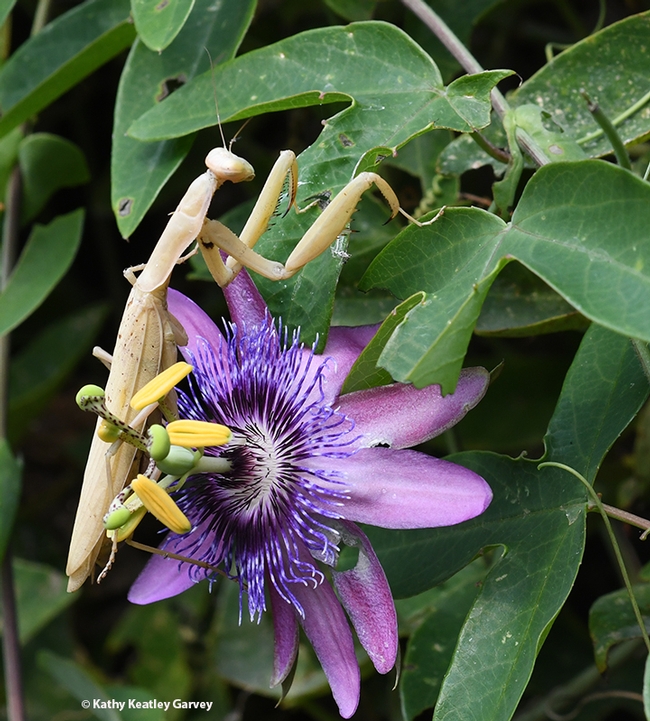 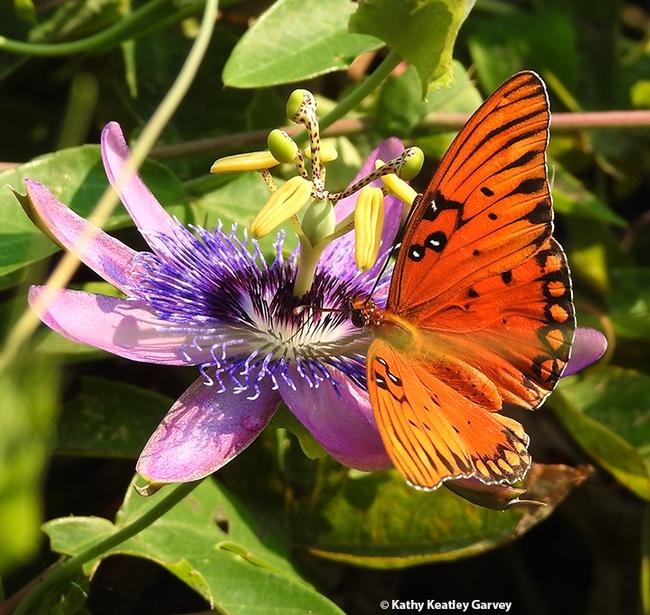 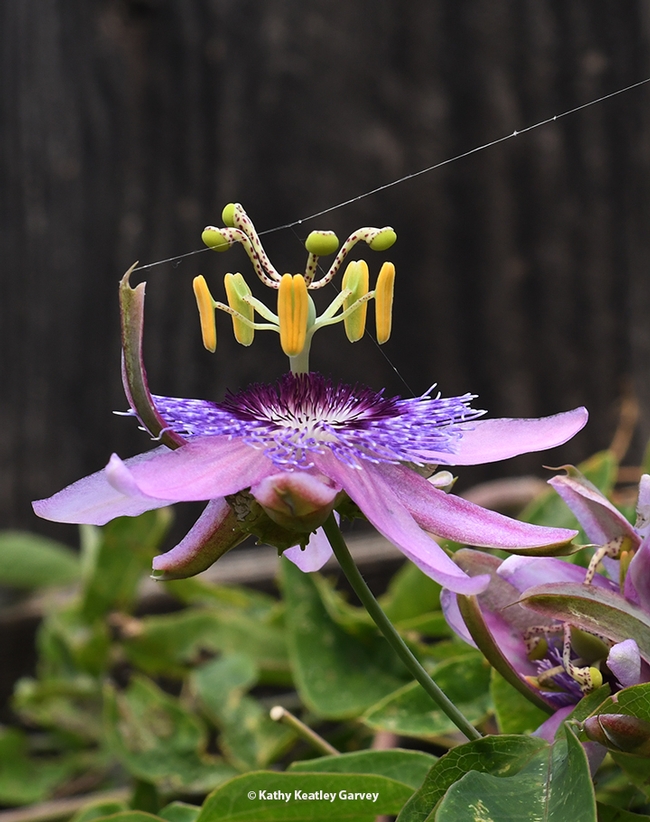