Did you have a pet Red-Eared Slider Turtle (Trachemys scripta elegans) when you were growing up? The distinctive red stripe on the side of the head is attractive and makes it easy to identify them.

The red-eared slider turtle is native in much of the mid- to south-central United States. However, it is an invasive species in California, Oregon, Washington and many other states. The US Geological Survey has mapped areas where it is native and not. Click this link and then scroll down to see the map.

California Department of Fish and Wildlife’s (CDFW’s) Outdoor California magazine reports that non-native pet turtles, like the red-eared slider, are a threat to California’s only native freshwater turtle, the Western Pond Turtle (Emys marmorata). Sliders became a problem because so many owners set them free in a local pond or lake. CDFW recommends removing red-eared slider turtles and other non-native species, like bullfrogs, that eat or compete with native species. They also recommend leaving native western pond turtles in peace. (Be patient if you click on the Outdoor California link; the file downloads slowly because it has lots of information and great photos.)

Why are red-eared sliders such a threat? Oregon Department of Fish and Wildlife reports that they compete with native turtles for food, nesting and basking space, and hiding places. Native turtles have no immunity to parasites and diseases carried by red-eared sliders. Turtles can live more than 20 years, so if you set them free, they will pose a threat for a long time! Dhi (see photo below) has been a pet for 18 years. Her human family decided to keep her, instead of releasing her to a local pond.

Columbia University explains that the red-eared slider plays important roles as both predator and prey in its native range. Because they are aggressive and bold, they compete for both food and space with native turtles, where they are introduced.

Buyer Beware! Small turtles sold as pets also cause Salmonella infections in humans. In May 2013 the federal Centers for Disease Control and Prevention reported a salmonella outbreak that affected 391 people in 40 states and the District of Columbia. 70% of the sick people had been exposed to turtles, and 89% of these people had been exposed to small turtles (shell less than 4 inches long). 30% of sick people with small turtles had bought them from a street vendor and 13% had bought them from a pet store. The CDC notes that in 1975 the US Food and Drug Administration banned sales and distribution of turtles less than 4 inches long, so it’s surprising that they are still being sold. 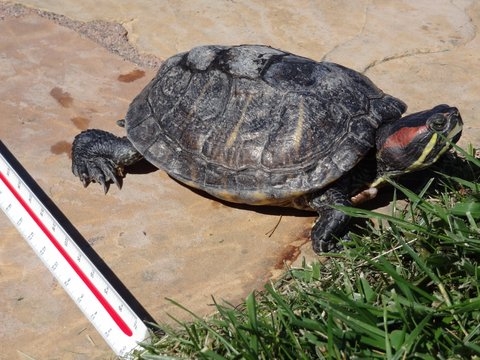 Dhi (dee) is an 18-year old, pet red-eared slider. She lives with her human family in northern California. Photo by Peter Townsend.
Tags: aquatic invasive species (10), invasive turtle (1), red-eared slider (1), red-eared slider turtle (1), turtle and salmonella (1)
Comments: 9
Comments:
by Kenn McCarty
on May 23, 2014 at 11:23 AM
Found a large female RES turtle in a state park in Mendocino Co, CA.
A naturalist (volunteer) person didn't seem to know they are invasive and said to let her go back into the wild.
I gave the turtle to a park employee to do as he saw fit.
As far as I can tell, there is no local plan or places to take recaptured RES turtles in Lake or Mendocino Counties.
Reply by Leigh Taylor Johnson
on May 23, 2014 at 2:43 PM
Thanks for sending this info, Kenn. I'm sorry to learn of the information gap.
by JC
on May 27, 2014 at 1:02 PM
I live in Sacramento, CA.

I have noticed a HUGE boom in the RES population. If you were to go to ANY local pond or creek in the area, you could spot 10 at any given time.

I am a fisherman and happened to catch 5 the other day....no fish unfortunately. I released the turtles unharmed, but wish I knew what to do with them, since killing them without using/eating them is inhumane.

Any advise?
Reply by Leigh Taylor Johnson
on May 27, 2014 at 1:20 PM
THanks for your comment, JC! I have written to the CA Dept. of Fish and Wildlife asking them to post information on their website about what to do when aquatic invasive species (AIS) are sighted. Their reporting hotline is listed in my blog "Rat on Aquatic Invaders!" I hope they can provide information on what else (if anything) anglers, boaters, hikers, etc. should do if they see RES or other AIS.
by Jeff
on June 9, 2014 at 9:29 PM
I have seen many Red Eared Sliders on the Lower American River behind Rio Americano HS. They out-number native pond turtles by 2:1. I have counted over 50 on sunny spring/fall/winter days.
by Lauren
on June 27, 2016 at 5:16 PM
Are red eared turtles illegal to have as pets in the state of Texas?
Reply by Leigh Taylor Johnson
on March 14, 2017 at 7:58 PM
Dear Lauren, Thank you for commenting. Please contact your state wildlife agency and localf government for answers to your question.
by laila
on March 14, 2017 at 3:37 PM
We have 2 RES females rescued from an apt where they were abandoned by a tenant who vacated; they've grown from very small babies (must have been pet store purchased) to now about 8" long. They're in a large tank, but we plan to build a natural pond on the front lawn of our nursery school to move them there. Even though they're not easy prey, they would roam and because of the 2' water depth planned we'll definitely fence the area (approx 10' x 10' planned). My concern is, in the outdoor environment will there still be a salmonella risk if they come in contact with children? We'd want to keep a respectful distance, but close observation can lead to touching... Your advice please
Reply by Leigh Taylor Johnson
on March 14, 2017 at 7:55 PM
Dear Laila, Thank you for your comments. Please contact your doctor, public health and/or wildlife agency for answers to your questions.
Leave a Reply: