Arizona State University Provost Robert E. Page, Jr., emeritus professor and former chair of the UC Davis Department of Entomology, and two other UC Davis-affiliated scientists are among the key members of the scientific team from the United States, Germany and France who published their work, “Gradual Molecular Evolution of a Sex Determination Switch in Honeybees through Incomplete Penetrance of Femaleness" in the prestigious journal.

Page traces the bee puzzle "back to Johann Dzierson in the mid-1800s through Mendel, through Harry Laidlaw to me and to my former postdoc at Davis, Martin Beye."

“Much of the work was done at UC Davis beginning in 1990,” said Page. While at UC Davis, "Martin began the sequencing and characterization of the csd gene; the paper was eventually published as a cover article in Cell." Bee breeder-geneticist Michael "Kim" Fondrk provided the genetic material for the research. (Photo by Kathy Keatley Garvey)
ASU spokesperson Margaret Coulombe, director of academic communications for the ASU College of Liberal Arts and Science, put it this way in a news release: “It's taken nearly 200 years, but scientists in Arizona and Europe have teased out how the molecular switch for sex gradually and adaptively evolved in the honey bee."

Dzierson believed that the males or drones were haploid--possessing one set of chromosomes, a belief confirmed in the 1900s with the advent of the microscope. In other words, the males, unlike the females, came from unfertilized eggs.

“However, how this system of haplodiploid sex determination ultimately evolved at a molecular level has remained one of the most important questions in developmental genetics,” Coulombe pointed out.

Coulombe quoted Page: “There has to be some segment of that gene that is responsible in this allelic series, where if you have two different coding sequences in that part of the gene you end up producing a female. So we asked how different do two alleles have to be? Can you be off one or two base pairs or does it always have to be the same set of sequences? We came up with a strategy to go in and look at these 18-20 alleles and find out what regions of these genes are responsible among these variants.”

Evolutionary geneticist Martin Beye, former postdoc at UC Davis.
“In this process,” Page said, “we also had to determine if there are intermediate kinds of alleles and discover how they might have evolved.”

In addition to Beye, Page and Fondrk, other co-authors are Christine Seelmann and Tanja Gempe of the University of Duesseldorf; Martin Hasslemann, Institute of Genetics at the University of Cologne, Germany; and Xavier Bekmans with Université Lille,  France

Page, recognized as one of the world’s foremost honey bee geneticists, is a highly cited entomologist who has authored more than 230 research papers and articles centered on Africanized bees, genetics and evolution of social organization, sex determination and division of labor in insect societies. His work on the self-organizing regulatory networks of honey bees is featured in his new book, The Spirit of the Hive: The Mechanisms of Social Evolution, published in June 2013 by Harvard University Press.

Page received his doctorate in entomology from UC Davis in 1980. He left his faculty position at Ohio State University in 1989 to  join the UC Davis Department of Entomology faculty. Page chaired the UC Davis department from 1999 to 2004 when ASU recruited him as the founding director and dean of the School of Life Sciences, an academic unit within College of Liberal Arts and Science (CLAS). Page was selected the university provost in December. He had earlier served as the vice provost.

The news story is gathering lots of interest, and rightfully so. It's a piece of a puzzle that went missing for 200 years.

Said Extension apiculturist Eric Mussen of the UC Davis Department of Entomology and Nematology, who was not involved in the research but knows many of the scientists and their work: "Once again, the studies by Dr. Rob Page and his colleagues have unraveled another mystery of honey bee development. It would be interesting if someone investigated the same type of sexual dimorphism in other hymenopterans to determine if they all use the same, ancient-based mechanism.” 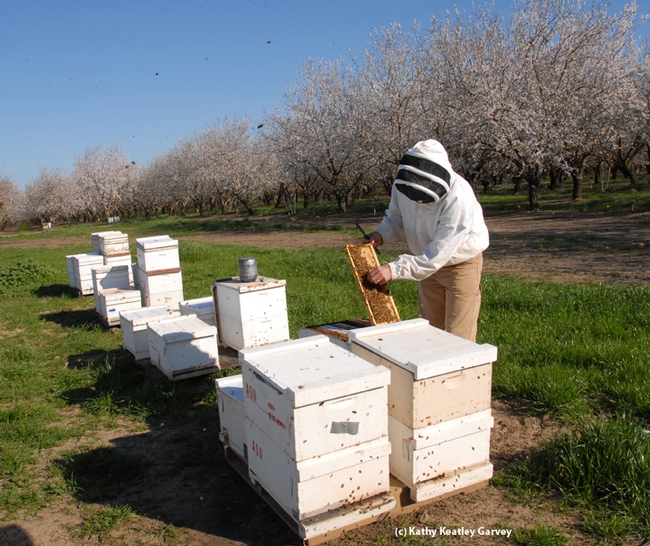