Bug Squad
sitenum=63
Happenings in the insect world
And the Winner of the Beer-for-a-Butterfly Contest...

Don't go looking for the first-flight cabbage white butterfly of the year in Yolo, Solano and Sacramento counties.

The beer-for-a-butterfly contest is over.

Shapiro, a distinguished professor in the UC Davis Department of Evolution and Ecology, again won his own three-county area contest by netting the first-flight cabbage white butterfly (Pieris rapae) of the year at 12:20 p.m. Tuesday, Jan. 14 in West Sacramento, Yolo County.

Shapiro netted a male on the south slope of the railroad tracks where “I’ve caught at least half of the first-flight cabbage whites.” The temperature was 62 degrees, but soon rose to 70 degrees.

“I caught it in mid-air with a ballet leap!” Shapiro said, smiling.

“There was a little radish but hardly any vegetation there. It was about 40 or 50 feet from where I got the one last year, about one-fourth  mile west of Harbor Boulevard. It was flying eastward along the edge of the service road.”

The annual contest, which Shapiro launched in 1972, seeks the first-flight cabbage white butterfly of the year in the three-county area of Sacramento, Yolo and Solano. He has won every year except for the three years claimed the championship title.

The contest is all part of Shapiro’s 43-year study of climate and butterfly seasonality. “It is typically one of the first butterflies to emerge in late winter. Since 1972, the first flight has varied from Jan. 1 to Feb. 22, averaging about Jan. 20.”

“The cabbage white is now emerging a week or so earlier on average than it did 30 years ago here,” Shapiro said. He estimated his 2014 find ranks as "the fifth or sixth earliest since 1972."

Shapiro delivered the butterfly to the Evolution and Ecology office, where it was verified by Sherri Mann and Joe Patrocinio. No one else has submitted an entry.

The professor, fellow of the American Association for the Advancement of Science, the Royal Entomological Society and the California Academy of Sciences,  initially calculated he would find the butterfly either Jan. 17 or 18. “It may have been out Monday (Jan. 13), but I was in Chico delivering a talk to the Northern California Botanists on “What Did Sacramento Valley Butterflies Do Before There Was Yellow Starthistle?”

While searching for the cabbage white on Tuesday, Shapiro also spotted a small male buckeye butterfly, (Junonia coenia) along the trail, and a mourning cloak (Nymphalis antiopa), perched on and flying around leafless willows. “That’s the fourth earliest antiopa in the valley ever,” he said.

Shapiro said he will be celebrating his victory by sharing a pitcher of beer with a friend at an undisclosed Davis venue. “It will be PBR (Pabst Blue Ribbon) because I get to choose.”

The cabbage white butterfly inhabits vacant lots, fields and gardens where its host plants, weedy mustards, grow. Mustards, however, are late this year, he said, pointing out the drought. “The record for consecutive days without rainfall in the winter here is 44. We’re on the 38th day and I see no chance of rain in sight, so this record will be broken.” However, a "good Pineapple Express," he said, could easily erase the drought.

Now, with the first-flight butterfly caught and in the history/record books, “it is spring because I say so.”

Shapiro maintains a website on butterflies at http://butterfly.ucdavis.edu, where he records the population trends he monitors in Central California.  He and biologist/writer/photographer Tim Manolis co-authored A Field Guide to Butterflies of the San Francisco Bay and Sacramento Valley Regions, published in 2007 by the University of California Press. 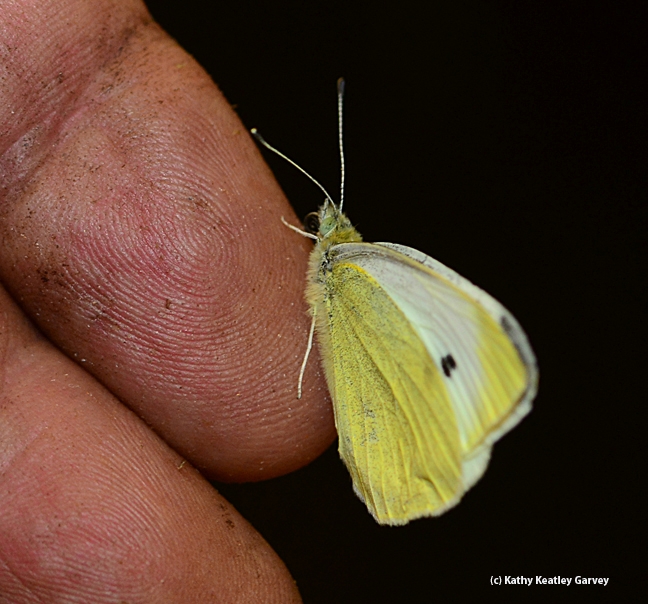 Suds for a bug...this is the cabbage white butterfly that Art Shapiro caught Jan. 14. (Photo by Kathy Keatley Garvey) 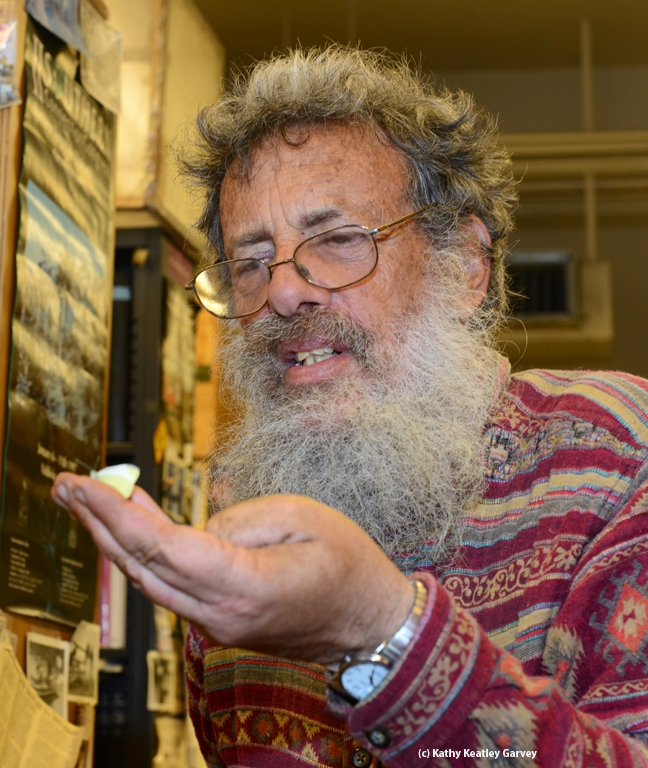