Robbin Thorp (Photo by Kathy Keatley Garvey)
When you see honey bees foraging on the California poppy, the state flower, they're not there for the nectar.

They're there for the pollen.

"California poppies provide only pollen--no nectar," native pollinator specialist Robbin Thorp, emeritus professor of entomology at UC Davis, told the Pollinator Gardening Workshop last Saturday on the UC Davis campus. Thorp was one of the featured speakers at the event, sponsored by the California Center for Urban Horticulture.

Thorp, who identifies thousands of bees a year for researchers, enthralled the audience with facts about bees. Although he retired in 1994, he maintains an office at the Harry H. Laidlaw Jr. Honey Bee Research Facility at UC Davis, and is one of the instructors of The Bee Course.

Some of the information he presented:

Thorp is the co-author of a newly published book, "Bumble Bees of North America" (Princeton University Press) and a co-author (with Gordon Frankie of UC Berkeley and colleagues) of a pending book with the working title, "California Bees and Blooms."

One of the websites Thorp recommends is the UC Berkeley Urban Bee Lab website, http://www.helpabee.org/, which provides information on native bees, gardening for bees, and current projects and partnerships. 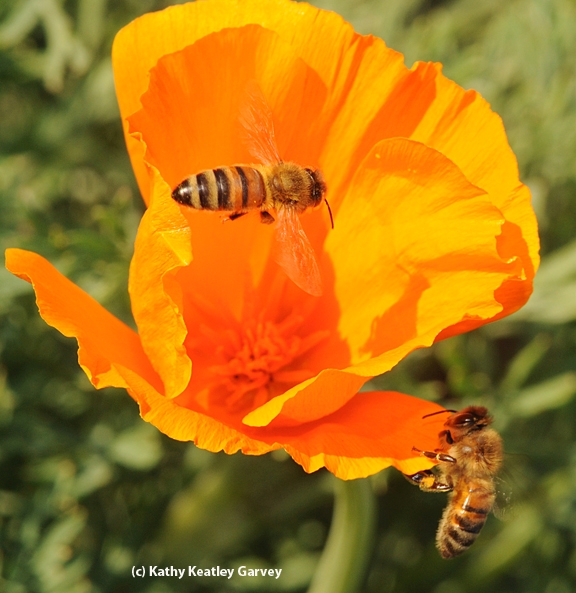 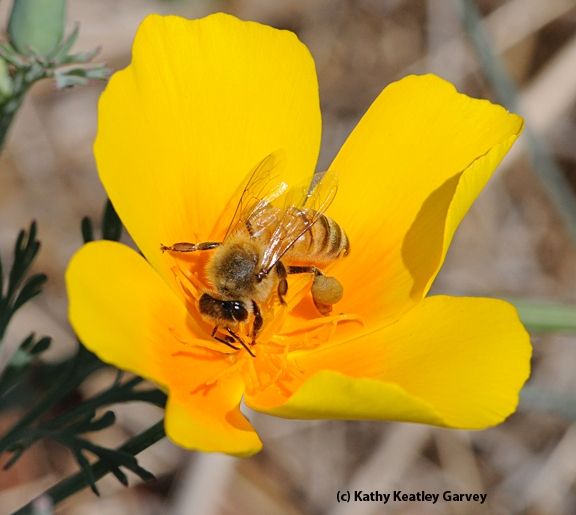 Honey bee with a pollen load. (Photo by Kathy Keatley Garvey)
Tags: California Center for Urban Horticulture (18), California poppies (2), pollen (30), Pollinator Gardening Workshop (2), Robbin Thorp (268)
Comments: 3
Comments:
by Sal
on March 19, 2014 at 12:23 PM
I love seeing the honey bees in poppy flowers. Seems like most flowers have yellow pollen, but poppies have orange. So the bee's pollen baskets are full of orange pollen after they have been foraging for awhile. Very unusual.
by John Bishop
on July 17, 2017 at 8:51 PM
I have a patch of California poppy. The patch volunteer seeds each year. Bumble bees seem to love to spin around and around in the flower. My impression is that they love the California poppy. I live near Seattle. The bee which seems to love it is B. caliginosus or
B. vandykei (not sure which but she has a narrow yellow ring near her tail and a partly yellow head.)
by on September 21, 2017 at 9:21 AM
I want to try it; its taste seems to be delicious and gorgeous but when we talk about healthy benefits of pollen I think that some studies says there isn’t enough evidence to consider bee pollen to be some magical healing elixir.
Leave a Reply: