The honey bee hive is not all sweetness.

The first virgin queen bee to emerge from her cell (each queen cell resembles a peanut shell) will rid the colony of her competition.

After emerging, the queen makes a mark on the other queen cells. That's an indication--or really, an order--for the worker bees to destroy the developing queen inside, says Cooperative Extension Apiculturist Eric Mussen of the UC Davis Department of Entomology faculty..

There can, after all, be only one queen bee in the hive.`

"The queen bee develops from a fertilized egg that hatches three days after being laid," wrote authors Eric Mussen, Len Foote, Norman Gary, Harry Laidlaw, Robbin Thorp and Lee Watkins in the UC Agriculture and Natural Resources booklet, Beekeeping in California, published in 1987. "Nurse bees, a class of worker bee, feed developing queen larvae a special diet consisting mostly of the royal jelly that they secrete from their glands. This special diet shortens the time spent to reach maturity to 16 days, compared with 21 days for the worker bee and 24 for the drone (male). The result is a bee larger than any others, with fully developed ovaries and a very large abdomen."

"The queen," they explain, "is reared in a large cell resembling a peanut shell that hangs vertically from the comb and about 10 days after emerging, she becomes sexually mature."

She's queen for the day, and every day. 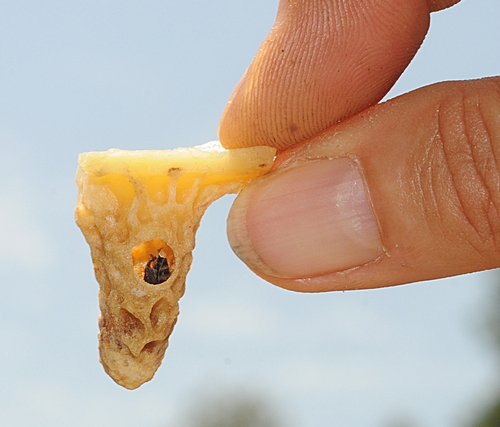 Queen Cell
HOLE in the queen cell indicates that the worker bees went in and destroyed the yet-to-be-born queen. The first queen to emerge makes a mark on the shell to indicate that the worker bees are to destroy it. (Photo by Kathy Keatley Garvey)
Tags: Beekeeping in California (1), Eric Mussen (246), peanut shell (1), queen bee (10)
Comments: 0
No Comments Posted.
Leave a Reply: