Bug Squad
sitenum=63
Happenings in the insect world
No Bees, No Cucumbers

When life hands you a lemon (cucumber), make honey.

The lemon cucumber (Cucumis sativus) is an increasingly popular garden vegetable that doesn't look like your typical cucumber. The vegetable is round to oval in shape and is pale yellow to pale green in color.

The photos below show a honey bee nectaring a lemon cucumber blossom and then packing the pollen.

Bee use their middle legs to “pat down and compact the growing pollen mass in the pollen baskets,” according to A. I. Root (1839-1923) and E. R. Root (1862-1953) in their landmark encyclopedia. The ABC and XYZ of Bee Culture. Although first published in 1877 and updated in 1920, the book maintains both an historical and current-day presence. It is considered a "must-have" or "must-read" book. The Smithsonian sponsored the digititzing and it can now be read online.

Here's what they have to say about cucumber blossoms:

“In the absence of bees, cucumber blossoms, whether in the field or hothouse, remain barren. The stamens and pistils are in different flowers on the same vine, the staminate flowers being more abundant on the main stems and the pistillate on the lateral branches.”

No bees, no cucumbers. 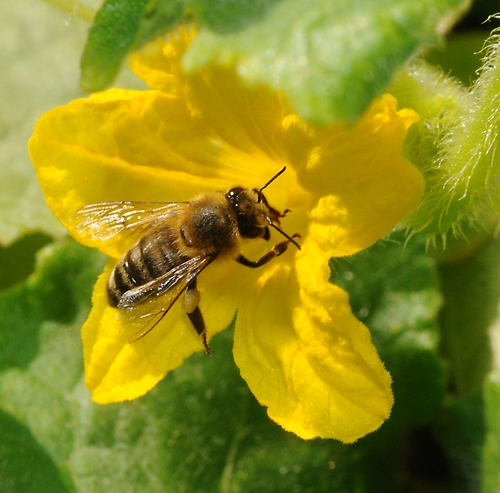 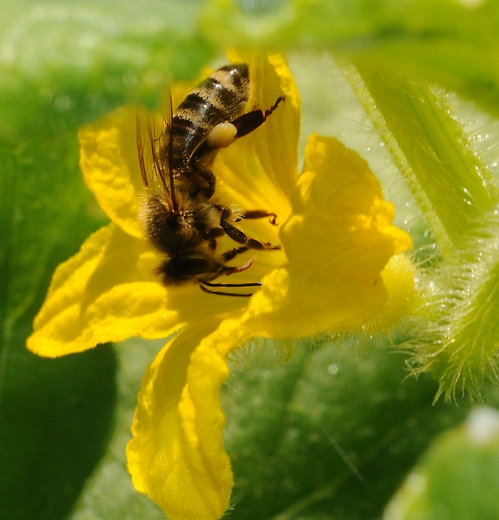 Pollen Load
THE POLLEN LOAD on this honey bee, nectaring a cucumber blossom, is a bright yellow. (Photo by Kathy Keatley Garvey) 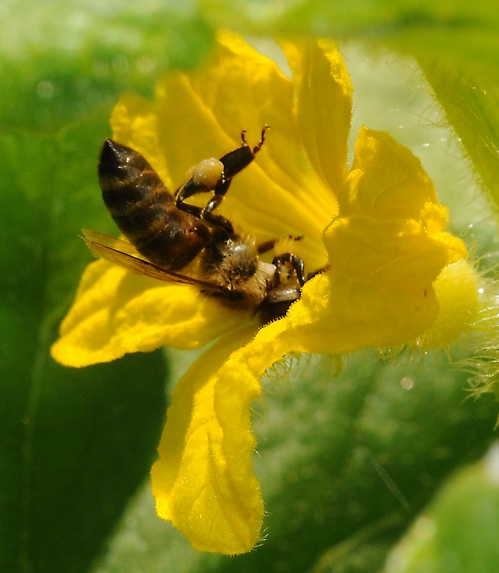