Bug Squad
sitenum=63
Happenings in the insect world
Honey, I Hardly Know Ya

Is this honey organic? (Photo by Kathy Keatley Garvey)
Ever been to a Farmer's Market and picked up a jar of honey advertised as "organic?"

And if you're a beekeeper, has a consumer ever asked you if your honey is organic? How do you know?

"The answer to the question about 'organic honey' makes sense only if the inquisitive person knows about the mechanics of producing any 'organic' commodity," said Mussen, who retired last June after 28 years of service but continues to maintain an office.

"There are a set of government definitions that set the requirements for producing many organic products – honey is not one of them.  So, we try to play by the rules for organic livestock and organic plant producers.  Basically, you have to find a 'certified organic certifier'who will certify your operation, at a cost.  You have to develop a 'plan' that explains how and where you are going to keep your bees.  Often the certifier wants them to be kept on previously certified organic farms.  The likelihood of the bees just sticking around that farm for food and water are practically zero."

So true! Remember that bees forage four to five miles from their colony or within a 50-square mile.

"So, you have to pay attention to the possible locations of 'contaminated' food and water within a 50-square mile area surrounding your apiary," Mussen told the beekeeper. "Things that catch the eye of the certifiers are landfills, golf courses, heavily-trafficked highways, agricultural plantings, etc. where contaminants are likely to be encountered.

"Like milk cows, you are supposed to start, or develop over time, an organic 'herd' of bees.  Like dairy cattle, if mastitis or American foulbrood shows up, the infected individuals have to be removed from the herd – not allowed to be killed – and medicated back to health.  After a period of time--pretty long--following recovery, the no-longer-sick animals can return.

Mussen points out that "any honey harvested and processed has to be done so in just the right way: no contact with plastics or other synthetics--pretty restrictive on packaging and sealable covers, right?"

Now, the truth of the matter, as cited by Mussen:

Mussen says the United States "produces quite a bit of honey from crops within the center of commercial agriculture and we are not having problems with contaminated honey."

So, whether beekeepers wish to call their honey organic. is up to them. "You would have to become certified, then have occasional visits by your certifier, if you wished to be legal," says Mussen. "It will not change your honey.  And, I have never heard of any certifiers testing honey for impurities."

Mussen further points out that the United States does not have a set of standards for organic honey production in as Canada and some European countries do. "We just borrow them from elsewhere!" He recommends this  website for more information on organic honey:  https://www.organicfacts.net/organic-products/organic-food/organic-honey-standards.html. 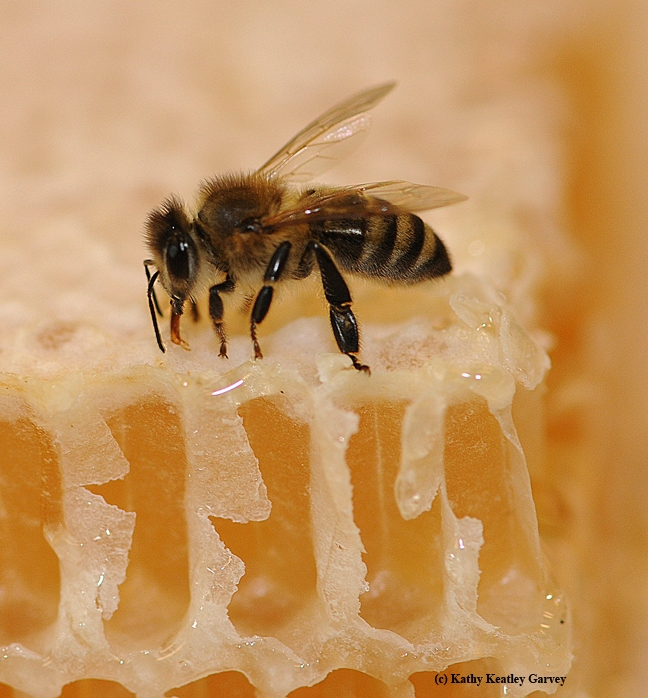 Of the 69 honey products tested by Abraxis and Boston U., 11 were organic and five of those tested above 15 ppb, results ranging from 26 to 93 ppb, with a mean of 50 ppb.

Read more: http://www.digitaljournal.com/science/honey-found-to-have-high-levels-of-roundup-herbicide-glyphosate/article/426458#ixzz3SfMBH3pY
by glenn scriven
on February 24, 2015 at 7:20 AM
I have read reports that honey from China was contaminated.
by Elizabeth McBride
on March 3, 2015 at 8:33 AM
Honey from China was contaminated, import was halted so they sold it via a neighboring country....but pollen tests showed it was from China....so they filtered out the pollen.....argh another sign China is not honest and not greening up.
by Sophie Robinson
on December 2, 2016 at 1:50 AM
Like the article says, the chance of a bee sticking around the organic farm is zero. Bees can fly many kilometers away to non-organic GMO fans. It is a risk with anything in life but honey does have many amazing health benefits so I always have some raw honey and cinnamon everyday with my tea.
Leave a Reply: