Bug Squad
sitenum=63
Happenings in the insect world
Kill It Or Let It Live? Matan Shelomi with a walking stick. (Photo by Kathy Keatley Garvey)
So, you've just stepped on a bug. Do you kill it and put it out of its "misery" or do you let it live?

That was basically the question that UC Davis entomologist/doctoral candidate Matan Shelomi answered on Quora.

Shelomi answered it so well that he tied for a first-place Shorty Award, the social media-equivalent of an Oscar. The Shorties are given annually to the best producers of short content on social media, as determined by popular vote. The question, posted on Quora, the popular question-and-answer website which engages worldwide users, drew scores of answers, but Shelomi's answer went viral and resulted in an invitation to the fourth annual star-studded Shorty Awards ceremony on March 26 in Times Square, New York City.

And nobody was more surprised than Matan Shelomi.

If you have a question, you, too, can post it on Quora. And if it's an entomological question, you just might get a creative answer from Matan Shelomi. 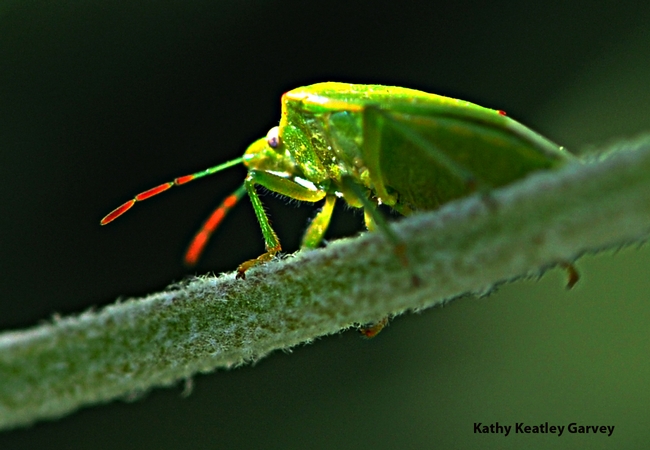 A red-shouldered stink bug peers at the camera. (Photo by Kathy Keatley Garvey)
Tags: Bohart Museum of Entomology (492), Matan Shelomi (16), Quora (3), Shorty Award (1), walking stick (4)
Comments: 50
Comments:
by Gabriele A O'Neill
on April 3, 2012 at 8:50 PM
It is interesting and not easy to imagine, that for an insect that is being parasitized, being eaten alive from the inside out might be experienced as nothing more than an "inconvenience".
by Richard Lewington
on July 19, 2012 at 6:19 AM
This is a nice post.Really I like it.

One question for you. I tried to look back but didn’t see an answer to this.

What kind of deal did you set up with your writer, who is certified in the industry, to get him interested enough to spend the time writing for you? Can’t wait to see you start monetizing the blog! Thank you for sharing your experiences here.
by rummy
on May 17, 2016 at 5:40 AM
Thanks for sharing this post. Keep updating such topics.
by Amelia
on June 16, 2016 at 2:43 AM
In your article you have provided a very good question. The answer of Shelomi is also very interesting. Really he teaches us so many valuable messages. All the images given here are very good. Keep sharing informative articles like this.
by lionel
on November 30, 2016 at 10:48 PM
The field of entomology is very interesting. Every insect is unique.
by Milanjoy
on December 12, 2016 at 2:25 AM
I am really interested in studying about living organisms. Thanks for your blog and it helps me a lot. Every living organism in this world has the right to live here. I feel that nobody have any right to destroy the space of other insects.
by report writing service
on March 25, 2017 at 12:40 AM
I have read your article; it is very informative and helpful for me. I admire the valuable information you offer in your articles. Thanks for posting it.
by coursework writing
on April 19, 2017 at 4:36 AM
Very educating story, saved your site for hopes to read more!
by hellenjos
on April 25, 2017 at 5:10 AM
Am afraid of bugs, but I am interested in studying about these organisms because they have some special features or characters to escape from their enemies. Some of them have the ability to change their color.
by click site to investigate
on April 27, 2017 at 3:19 AM
Excellent .. Amazing .. I’ll bookmark your blog and take the feeds also…
by hellen jos
on June 20, 2017 at 5:11 AM
I hate bugs. I become so afraid while seeing them but I don’t like to kill them.
by william kittrell
on July 12, 2017 at 1:06 PM
Thanks for sharing this article with me. Great work. Amazing.
by youtube converter
on September 11, 2017 at 6:36 AM
This is a great inspiring article.
by on September 26, 2017 at 12:04 AM
Excellent information on your blog. Thank you for taking the time to share with us. Amazing insight you have on this; it’s nice to find a website that details so much information about different artists.
by eliza jhon
on January 24, 2018 at 2:24 AM
I feel a lot more people need to read this, very good info!
by psd to responsive html
on March 1, 2018 at 4:09 AM
I recently found many useful information in your website, especially this blog page. Thanks for sharing.
by jobs in lahore
on April 23, 2018 at 2:37 AM
Very good points you wrote here..
by careerokay.com
on June 28, 2018 at 3:12 AM
that's really a very good post. You create it in very good style and easy words collection.
by National Hammock Day
on July 14, 2018 at 5:31 AM
Great tips and very easy to understand. This will definitely be very useful for me when I get a chance to start my blog.
by seomaster
on May 2, 2019 at 9:10 AM
Thanks for writing such a good article. I stumbled onto your blog and read a few post. I like your style of writing.
by on July 17, 2019 at 11:03 PM
Took me time to read all the comments, but I really enjoyed the article. It proved to be very helpful to me and I am sure to all the commenters here! It’s always nice when you can not only be informed, but also entertained!
by Sorab Hassn
on March 19, 2020 at 9:25 AM
It's a magnificent post.
by on May 13, 2020 at 3:11 AM
Pretty good post. I just stumbled upon your blog and wanted to say that I have really enjoyed reading your blog posts. Anyway I'll be subscribing to your feed and I hope you post again soon. Big thanks for the useful info.
by Laura Uchello
on May 16, 2020 at 10:06 PM
How do you know they don't have emotions or feelings? They run from you, they struggle when you spray them. That's fear, that's fear of pain and death.
by Jewel
on July 8, 2020 at 7:27 PM
Seems very rational--until I apply the full extent of my emotional sensitivity. I have always thought that anything that has life will suffer if it does not die immediately from an injury or disease. Imagine how much heartache this has caused for me since I was a child. I’m in my sixties now. I’m going to consider your reply to the inquiry for awhile and maybe lessen my emotional reaction to “The Activity of: “Accidentally stepping on a bug - kill it or let it live?” Thank you.
by denial
on August 2, 2020 at 11:41 AM
significantly differ
by Nancy J Krause
on November 29, 2020 at 7:51 AM
I think spiders are absolutely equipped with the emotion of fear and that's what makes them run away or hide when feeling threatened. So, if they are being threatened or being killed or being stepped on or being pursued in any way, they most definitely are feeling emotions at the time the event is occurring.
by 메이저사이트
on December 8, 2020 at 6:25 AM
Hello, I am so delighted I located your blog, I really located you by mistake, while I was watching on google for something else, Anyway, I am here now and could just like to say thank for a tremendous post.
by Ruggero Gabbrielli
on May 9, 2021 at 4:45 AM
They don’t have emotions.
Interesting.
I wonder how he figured that out.
Has he talked to them?
by fa
on May 30, 2021 at 11:45 PM
It’s best to participate in a contest for among the best blogs on the web. I’ll advocate this website!
by Cbitss
on August 13, 2021 at 4:40 AM
Great Information!!!
by david Goodwin
on December 3, 2021 at 8:45 PM
Fear is not an emotion. It is an inherent fight or flight instinct. We try to decide to run or shelter. It does not require emotional thinking or rationalization--it is an instinct. It is akin to computer logic: "if-and-else-or-then"
Leave a Reply:

Recent Posts
What Pests Are Eating Our Crops? And What Are Eating the Pests?
May 27, 2022

Ten Facts You May Not Know About Tadpole Shrimp
May 26, 2022