Bug Squad
sitenum=63
Happenings in the insect world
Luck Be a Lady! (A Painted Lady)

The "Painted Ladies" are back in the Davis area.

These are not the two-legged type, but the winged type--Vanessa cardui.

They're migrating and driving UC Davis entomology and ecology students nuts. It's finals week and they'd love to be outdoors watching the migration instead of inside studying for their tests.

Butterfly expert Art Shapiro, distinguished professor of evolution and ecology, said that on Tuesday, March 17, St. Patrick's Day, "the front of a significant Painted Lady migration hit Davis about 7:30 this morning. I saw about 30 just in walking from Storer Hall to the Memorial Union bus terminal.

Shapiro then went to Gates Canyon, Vacaville, one of his field study sites, and saw more. It was 77 degrees at Gates Canyon (sorry, Bostonians!). He saw PLs all the way. He counted 81 in the canyon "but the apparent density in the open--Pleasants Valley, Vacaville--was much higher, with about 6 per minute in my field of vision."

"I imagine many were going over my head out of sight at Gates. Back in Davis I was seeing 10 per minute. This is about 1/6 of the density during the legendary 2005 migration."

"They are ALL large, fresh-looking, and on a solid SE-NW course, as usual stopping for nothing and going up and over all obstacles; very few are nectaring. We'll see how long it lasts! The condition suggests these are the offspring of a first round of breeding somewhere in Southern California--not direct from the deserts. We have an exceptional crop of milk thistle (Silybum) this year. May their offspring eat it all!"

You can read about the 2005 migration on Sharpiro's butterfly site. "This mass-migrant occurs in much of the Northern Hemisphere," he wrote. "Apparently the entire North American population winters near the US-Mexico border, breeding in the desert after the winter rains generate a crop of annual Malvaceous, Boraginaceous and Asteraceous hosts. The resulting butterflies migrate north." 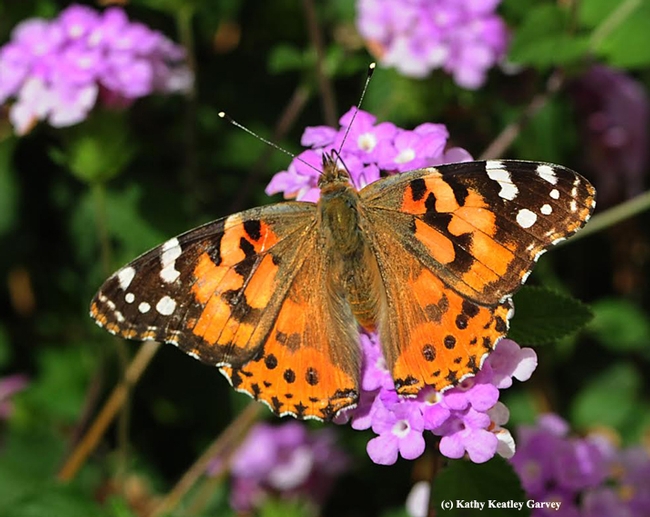 A Painted Lady, Vanessa cardui, nectaring on lantana. (Photo by Kathy Keatley Garvey)
Tags: Art Shapiro (257), Painted Lady (7), Vanessa cardui (6)
Comments: 1
Comments:
by Win Rogers
on March 19, 2015 at 10:45 AM
Kathy, you and your colleagues always meld life, art, science & philosophy with a great deal of heart. Often I share your blog posts with my fellow Master Gardeners and our clientele because you present your topics so well and give references for our research.
Leave a Reply: