Extension apiculturist emeritus Eric Mussen holding a frame. (Photo by Kathy Keatley Garvey)
So you're thinking of become a commercial beekeeper and renting your colonies to almond growers.  California currently grows some 900,000 acres of almonds, and each acre requires two colonies for pollination.

A friend gave you some old bee boxes.  So where do you start? What do you do?

Before you fill those boxes with bees, you should plan ahead, says Extension apiculturist emeritus Eric Mussen, whose career spanned 38 years before he retired last June. He continues to maintain an office in Briggs Hall, UC Davis Department of Entomology and Nematology,  and is often asked these kinds of questions.  We thought we'd share some of the advice he recently gave to a prospective beekeeper.

“The most difficult problem that you are likely to face in California is where your apiaries are going to be located for use during certain times of the year," Mussen said. "There are very few places in California where you can let honey bee colonies just sit there and they will do fine.  If such spots exist, other beekeepers already have 'squatters' rights' on them and intrusions can lead to nasty activities.  The best way to be certain of at least some locations is to buy out an old-time beekeeper who is ready to leave the business.  By 'beekeepers' agreement' you get to use his or her bee yards.  You also are likely to pick up the old beekeeper's almond contracts.  You will need those, or new ones, to prosper."

"Next November the California State Beekeepers' Association is holding its annual convention in Sacramento the week before Thanksgiving.  That is THE GATHERING of beekeepers in this state.  It will provide your best opportunity to 'schmooze' with your peers and find out who might be ready to phase out of the business allowing you to phase in."

What about the using old bee boxes?

"There are two things important to you," Mussen says,"that you have to watch for:

"I believe that most beekeeping equipment manufacturers produce good products.  You might want to consider which company has a large outlet closest to where you will be headquartered.  You will be running to the supply company many more times than you can imagine."

"Your final decision is very important, because it impacts your beekeeping from just about the time you put your bees in the boxes.  Are you going to try to keep bees with no chemical intervention to prevent or reduce commonly-occurring problems like American foulbrood and Varroa mites?  Or are you going to first try 'soft' approaches, and then more rigorous approaches if the problem seems to persist?  Yes, there are a few commercial beekeepers who do not treat their colonies very often, if at all, but they are using mite-resistant lines of bees and they tend not to stay in the heart of the agricultural production areas all season.  Most of them pollinate almonds, then scoot off to try to produce a honey crop."

Of course, new beekeepers are encouraged to read beekeeping books; subscribe to bee publications such as American Bee Journal and Bee Culture; join a local beekeepers' association, join state and regional associations; and get to know bees and beekeepers.  A regional beekeeping association, co-founded by Mussen, who is a five-term president, is the Western Apicultural Society. 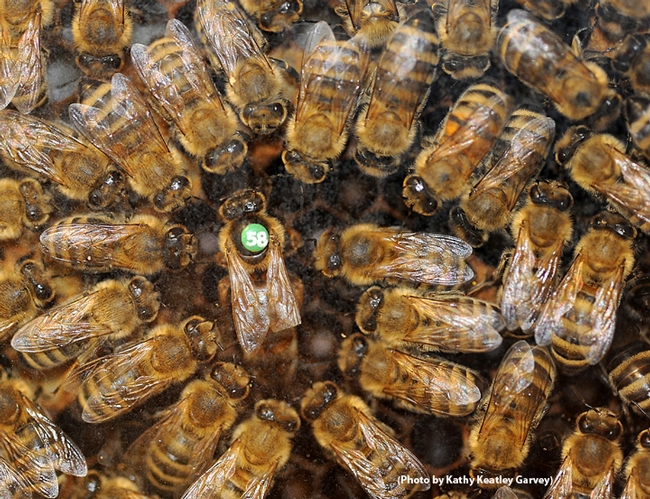 A queen bee and her retinue. (Photo by Kathy Keatley Garvey) 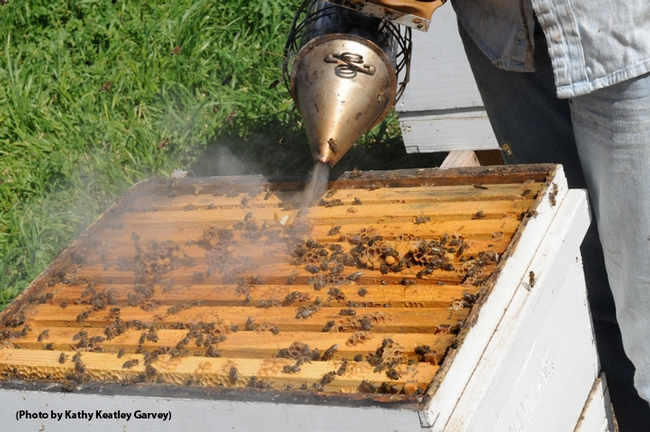