What a grand event!

When the University of California, Davis held its annual campus "Take Your Daughters (And Sons) to Work" Day today (April 23), the participants met one-on-one with entomologists, firefighters, physicians, plant specialists, veterinarians and scores of others in the UC Davis workforce.

It was one big open house.

At the Bohart Museum of Entomology, children's author S.S. Dudley (also known as retired scientist Steve Stoddard of medical entomologist Thomas Scott's lab in the UC Davis Department of Entomology and Nematology), entertained the crowd by talking about the places he's been, the insects he's seen and the people he's met. He is the author of “Butterfly Wish” and “Elf Hills.”

Joel then walked over to the live "petting zoo" and held walking sticks and a rose-haired tarantula named Peaches. Little Roxanne Bell, 7, whose mother Jenna works at the Mondavi Center, said that Peaches "tickled" her. Her expression? Priceless!

"Take Your Daughters (And Sons) to Work" goes by the name of TODS, but that doesn't began to explain what it's all about. It's more than just a career day. Officials say "it not only exposes girls and boys to what a parent or mentor does during his/her workday, but shows children the value of their education and provides an opportunity to share how they envision their future and begin steps toward their goals in a hands-on and interactive environment."

Maybe some day little Joel Fuerte will become a children's author and little Roxanne Bell, an entomologist. Or vice versa! Or, maybe they can do both, and follow the career path of Steve Stoddard, aka S. S. Dudley. 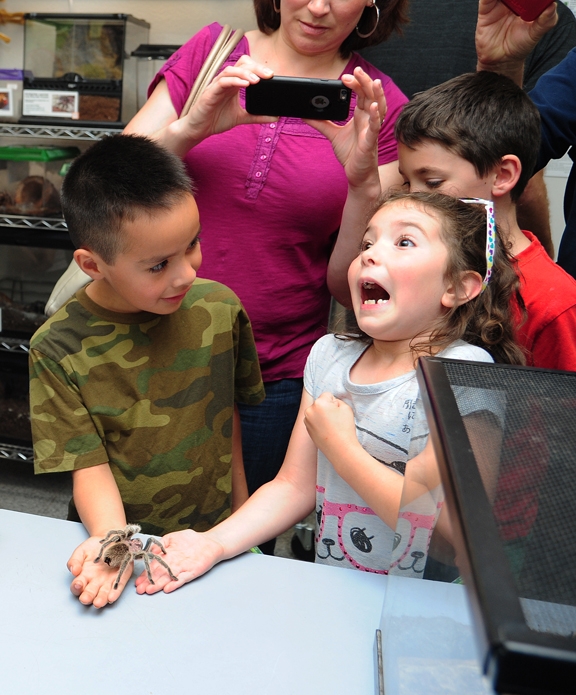 Roxanne Bell, 7, of Davis, decided that Peaches, the rose-haired tarantula, "tickles!" Watching her reaction at the Bohart Museum of Entomology, during "Take Your Daughers (And Sons) to Work" Day is Joel Fuerte, 6, of Woodland. Their mothers work at UC Davis. (Photo by Kathy Keatley Garvey) 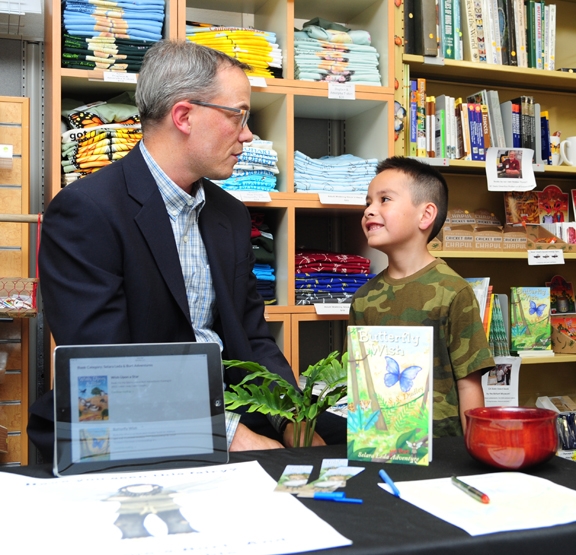 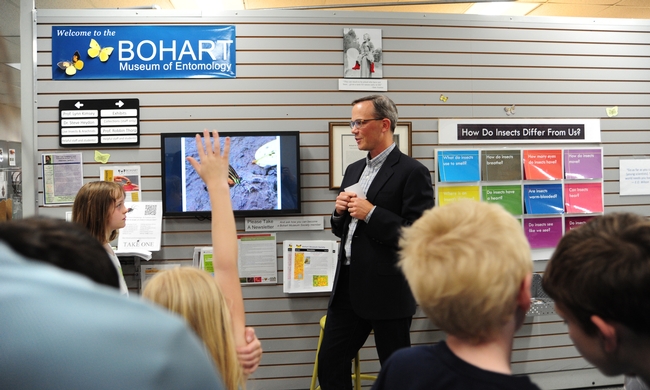 Children's author S. S. Dudley draws the attention of a crowd listening as he talks about the morpho butterflies. (Photo by Kathy Keatley Garvey)
Tags: Bohart Museum of Entomology (547), Joel Fuerte (1), Roxanne Bell (1), S. S. Dudley (1), Scott Stoddard (1), TODS Day (1)
Comments: 1
Comments:
by Tarantula lover (Scott E.)
on January 16, 2016 at 9:37 AM
Great expression on that girl's face who's holding the rose-hair tarantula! I've recently started working with Brazilian Black tarantulas (G. pulchra), which are in the same Grammostola family but are just as docile, and much more active.
Leave a Reply: