Bug Squad
sitenum=63
Happenings in the insect world
What's Wrong With This Picture? Close-up of a cricket on a blanket flower (Gaillardia). (Photo by Kathy Keatley Garvey)
Take a look at the insect below.

Correct. It is a cricket.

But it doesn't belong there.

Why? It's the wrong cricket. It's not a "field cricket" but a "house cricket." House crickets don't "belong" on flowers.  They're reared in many parts of the world as food for humans and animals.

The situation unfolded like this: When I walked into a local pet food store to buy goldfish food, I noticed a sign offering crickets for 14 cents apiece. What a bargain! Fourteen cents!  One thin dime and four pennies.

In reality, I was probably buying someone else's reptile food.  I figured I'd buy six, photograph some of them, and then release them.

I placed a female cricket on the colorful blanket flower (Gaillardia) and watched while she explored her surroundings. Then a honey bee arrived to forage on the same blossom. Voila! A house cricket and a honey bee sharing a flower. However, the honey bee was not at all pleased and buzzed off to find a cricketless blossom.

Of the six crickets, four escaped in the transfer from the closed bag to the patio table. The sixth cricket (top photo) peered back at me.

Crickets were in the news recently when University of California researchers indicated that they're not all that they're cracked up to be as an alternative, global source of protein in the human diet to supplement or replace livestock consumption.

UC Cooperative Extension agronomist Mark Lundy, lead researcher, and horticultural entomologist Michael Parrella, professor and chair of the UC Davis Department of Entomology and Nematology worked on the project at UC Davis and then published their research April 15 in the Public Library of Science (PLOS ONE). The title: "Crickets Are Not a Free Lunch: Protein Capture from Scalable Organic Side-Streams via High-Density Populations of Acheta domesticus."

The entomologists acknowledged that crickets are known to pack a protein punch, and are often touted as “the sustainable food of the future,” but the issue is far more complex than that.

"While there is potential for insect cultivation to augment the global supply of dietary protein, some of the sustainability claims on this topic have been overstated,” said Lundy, who headed the research at UC Davis while seeking his doctorate in agronomy. “Our study demonstrates that the sustainability gains associated with cultivating crickets as an alternative source of protein will depend, in large part, on what the crickets are fed and which systems of livestock production they are compared to.”

“Insect cultivation is more likely to contribute to human nutrition at a scale of economic and ecological significance if it does not rely on a diet that competes with conventional livestock, but more innovation is needed for this to become a reality,” Lundy said. “Moving forward, the imperative will be to design cost-effective processes that enable large populations of insects to capture protein from underutilized organic waste and side streams."

Said Parrella: “Everyone assumes that crickets--and other insects--are the food of the future given their high feed conversion relative to livestock. However, there is very little data to support this and this article shows the story is far more complex.”

For the study, the researchers modified a UC Davis greenhouse into replicated cells. They measured the biomass output and feed conversion ratios of populations of crickets (Acheta domestics) reared on food that ranged from grain-based to highly cellulosic diets.They found that the biomass accumulation was “strongly influenced by the quality of the diet.”

“The measurements were made at a much greater population scale and density than any previously reported in the scientific literature,” they wrote. “The biomass accumulation was strongly influenced by the quality of the diet, with the nitrogen concentration, the ratio of N to acid detergent fiber content, and the crude fat explaining most of the variability between feed treatments. In addition, for populations of crickets that were able to survive to a harvestable size, the feed conversion ratios (FCR) measured were higher (less efficient) than those reported from studies conducted at smaller scales and lower population densities. Compared to the industrial-scale production of broiler chickens, crickets fed a poultry feed diet showed little improvement in protein conversion efficiency (PCE), a key metric in determining the ecological footprint of grain-based livestock protein.”

“Crickets fed solid filtrate from food waste processed at an industrial scale via enzymatic digestion were able to reach a harvestable size and achieve an FCR and PCE similar to that of broiler chickens,” they wrote. “However, cricket populations fed minimally-processed, municipal-scale food waste and diets composed largely of straw experienced more than a 99% mortality before reaching a harvestable size.”

The researchers concluded that the potential for “Acheta domesticus to sustainably supplement the global protein supply, beyond what is currently produced via grain-fed chickens, will depend on capturing regionally scalable organic side-streams of relatively high-quality that are not currently being used for livestock production.”

Worldwide, statistics show that crickets are the most widely cultivated insects for the human diet, and are considered the “gateway bug” to entomophagy. They are touted as highly nutritious, and much better for the planet—environmentally and financially--than livestock due to their comparatively efficient feed conversion.

“I'm all for exploring alternatives, and I am impressed by the amount of innovation that has sprung up around insect cultivation and cuisine in the last few years,” Lundy said. “However, I also think we need to be clear-eyed about what the sustainability gains are and aren't, and focus our innovative efforts and limited resources to where they will have the most lasting impact.”

In his talk on "Adventures in Entomophagy: “Waiter, There's No Fly in My Soup!” Gordon said that 80 percent of the world's culture eat bugs and two-thirds of all animal species are insects. "Bug-eating is good for the planet. Bugs are nutritious, delicious, cheap and plentiful.”

“Whether a country eats bugs has a lot to do with dependence on agriculture,” Gordon said. “Insects are in direct competition with humans for food. But as the human population grows, we can't feed them all (what Americans are accustomed to eating). People are eating hamburgers when they should be eating bugs.”

Raising cows, pigs and sheep is a “tremendous waste of the planet's resources, but bug ranching is pretty benign,” Gordon  said. With cows, “it takes the equivalent of 16 pounds of grain and 2000 gallons of water to get one pound of steak." And the resulting greenhouse gases are not good for the planet, either, he pointed out.

“In our culture, bugs are often considered a novelty food, such as tequila-flavored lollipops,” the chef told the crowd.  However, cricket energy bars "have gone mainstream," and cookies made with cricket flour are becoming more and more popular."

“Insects are the food of the future,” Gordon declared.

He cautioned that all bugs should be cooked, as cooking kills any parasites.  Bug chefs must also take special precautions in preparing stinging arthropods.

Soaking in all that cricket news over the last six months has proved to be both entertaining and informative.

So, what happened to the two house crickets on the blanket flowers? Crickets from a pet store are not meant for human consumption. We like to think that the crickets experienced a little life, an unusual life, before a predator nailed them. 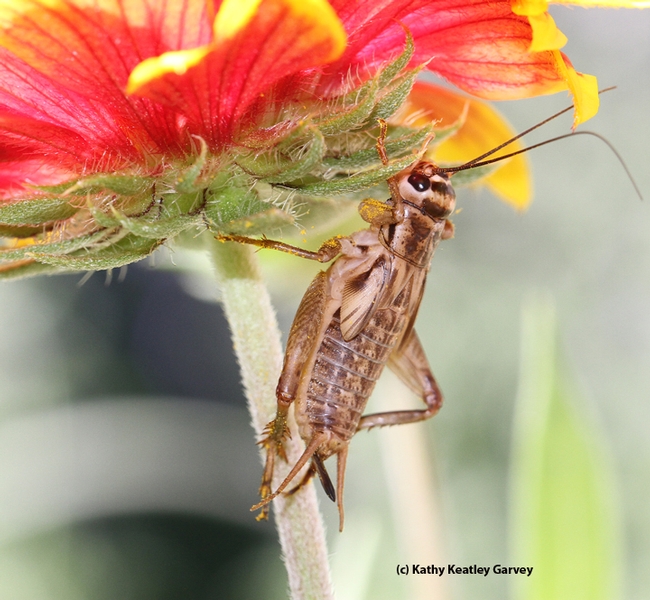 What's wrong with this picture? This is not a field cricket but a house cricket. (Photo by Kathy Keatley Garvey) 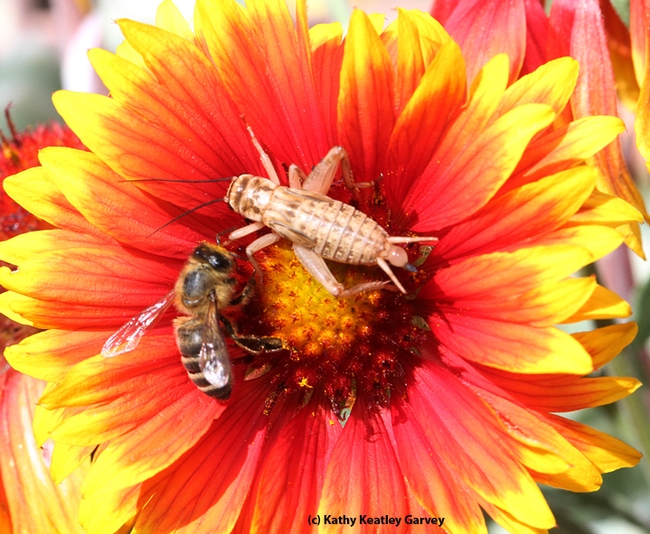