The jade-green chrysalis turns transparent just before the monarch butterfly ecloses. This one was a male. (Photo by Kathy Keatley Garvey)
Oh, the joys of rearing monarch butterflies. Not for commercial purposes. For conservation purposes.

For a couple of months now, we've been watching the monarch caterpillars slowly disappearing from our milkweed plants.  We'd see fifth instar 'cats one day, and the next day, they'd be gone. Then we'd see the Western scrub jays flying through the yard and landing near the plants. Culprits!

Okay, we thought, how about some tulle or wedding veil-type fabric or those zippered hampers to pop over the plants? Those worked better. Not as many escapees.

But what really worked was bringing the caterpillars into the house and placing them into the butterfly habitat containers (from the Bohart Museum of Entomology, University of California, Davis).  Daily we'd feed the 'cats bouquets of fresh milkweed tucked into a narrow-throated, flat/wide-bottomed bottle. I think that in its other life, it was a tequila bottle. It went from borrowed tequila bottle to butterfly bottle.

The first one to eclose was a male. The second one, a female.  Releasing them was pure joy.

Then today, two more eclosures. First, a male. Then a female. As soon as their wings dried, we released them. The male fluttered rather clumsily (okay, it was his first flight). The female preferred to soak up some sunshine as she clung tightly to a butterfly bush.

If we hadn't brought the caterpillars into the house, would they have reached the adult stage? Probably not. Scientists say  that only 10 percent make it from egg to adult in the wild.

Watching the transformation from egg, to caterpillar, to a gold-studded jade-green jewel (chrysalis) to an adult is just plain exhilaration and jubilation. Such bliss. No wonder monarch conservations are addicted. It's like watching the miracle of life unfold.

Hollywood actors and actresses who deliver their acceptance speeches at the Academy Award ceremonies have nothing on us.

We Monarch Moms and Dads can deliver A-'Cat-emy Award presentations, too. (Of course, we have butterflies in our stomachs because we're not used to being on stage.)

"And finally, we are here to tell you that change is good. It can transform you. You say you don't believe that a leaf-munching caterpillar can become a glorious butterfly? Let us tell you what the word, metamorphosis, means to us. Met-a-more-for-us. More for us. More for the world. (Applause, standing ovation) Thank you, thank you! Monarchs rule!" 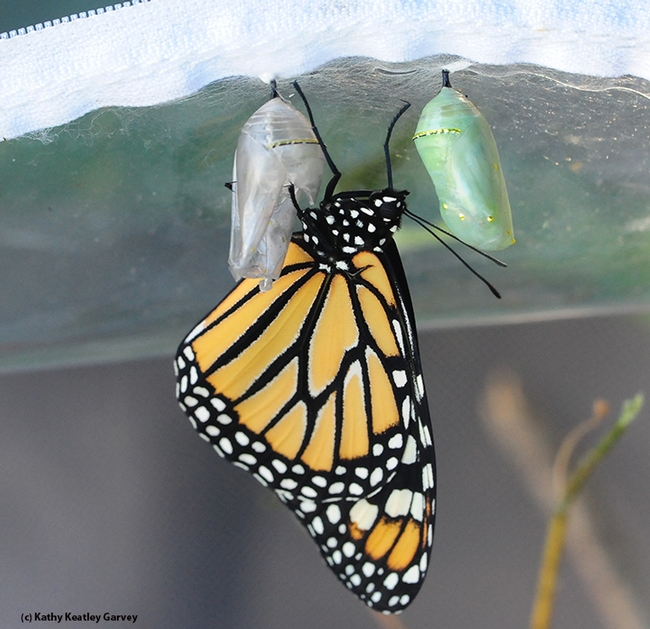 Female monarch has just eclosed. Next to her is a gold-studded jade-green chrysalis. (Photo by Kathy Keatley Garvey) 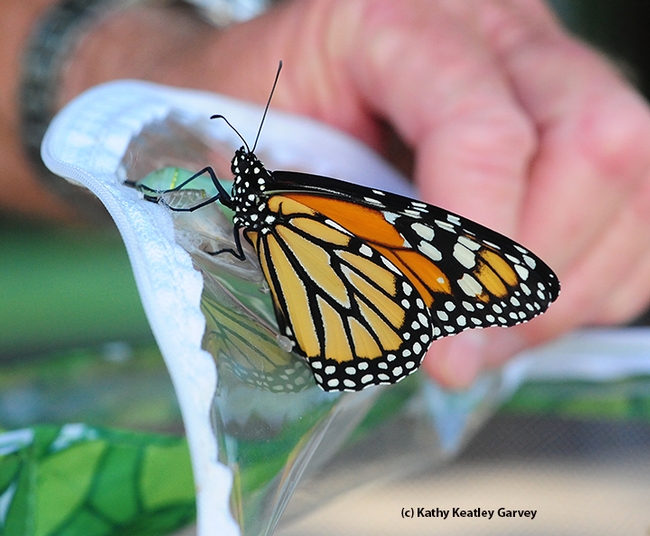 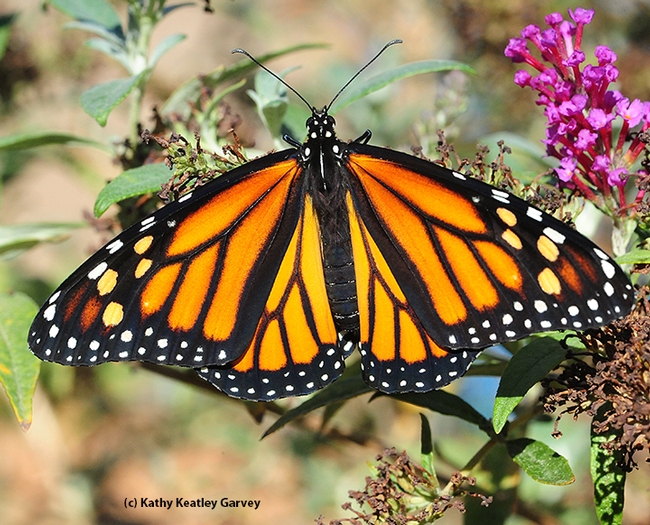 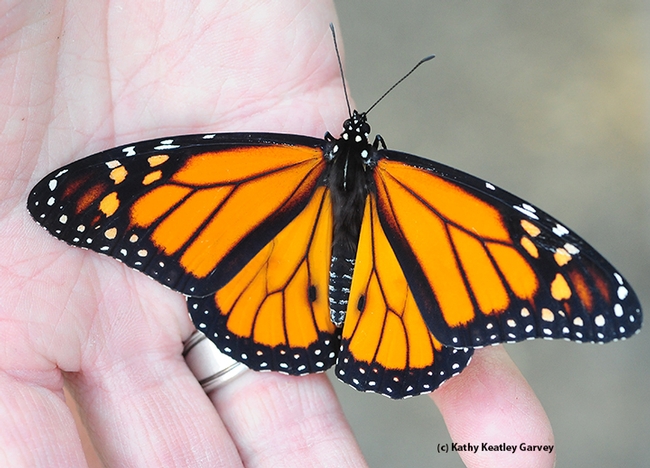 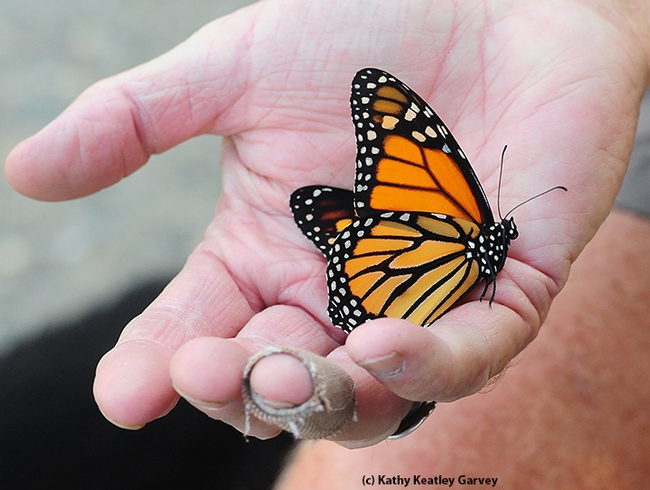 Male monarch ready to be released. (Photo by Kathy Keatley Garvey)
Tags: adult (6), caterpillar (14), chrysalid (2), egg (9), mllkweed (1), monarch butterflies (79), rearing butterflies (2)
Comments: 5
Comments:
by Anne Schellman
on October 19, 2015 at 9:06 AM
Gorgeous photos Kathy! I'm curious, I thought the caterpillars tasted bad due to their diet of milkweed. Why would bluejays eat them?
by Kathy Keatley Garvey
on October 20, 2015 at 12:40 PM
Birds do eat the caterpillars. They may not eat as many of them, but they do eat them. One scientific study showed that when the entire monarch butterfly was ground up and fed to bluejays, the bluejays "barfed." That apparently was because the wings are quite poisonous. Birds avoid eating the wings.
by Anne Schellman
on October 20, 2015 at 2:27 PM
So they just eat the bodies then? That's interesting. I once found a "pile" of anise swallowtail wings under a planting of zinnias. Someone else (I'm thinking a mantis) was just eating the bodies but I guess it could have been birds too. In that case, perhaps it's because the wings taste dry?
by Kathy Keatley Garvey
on October 29, 2015 at 11:28 AM
They eat the bodies and not the wings, which apparently contain most of the poison.
by bird netting
on December 10, 2015 at 5:27 AM
WOW, simply great post; thanks for publishing. Some good examples here. A blog that’s both educative and interesting./
Leave a Reply: