California's beekeepers not only worry about the varroa mite (aka Public Enemy No. 1), but the small hive beetle.

As the state prepares for its annual almond pollination season--which usually begins around Valentine's Day--beekeepers from all over the country are trucking in their bees.

Members of the California Bee Breeders' Association expressed concern about the beetle at their meeting Wednesday in Ord Bend, Glenn County. The beetle a pest of honey, pollen and bee brood and can spread rapidly.

Small hive beetles keep a low profile and can be missed at the border inspection stations, an ag commissioner said. Reasons include "not all border stations are open 24 hours a day" and some inspectors are untrained in detecting them. They can also be overlooked at county inspections.

Native to sub-Saharan Africa, the small beetle was first discovered in the United States in 1996, so it's been around for awhile. It thrives in "warm, humid climate with soft soil," says Extension apiculturist emeritus Eric Mussen of the UC Davis Department of Entomology and Nematology, whose career spanned 38 years before his retirement in June 2014. "It can overwhelm a mating nuc."

"It can be a real problem in states like Hawaii, Georgia, South Carolina, North Carolina and Florida," Mussen says. It's been found in some 30 states, including California, Michigan, Pennsylvania, New Jersey, Ohio, Illinois, Minnesota, Maryland, Missouri, New York, Connecticut, Rhode Island, Virginia and Texas, as well as internationally.

Wikipedia colorfully describes beetle larvae as tunneling through the combs, "feeding and defecating, causing discoloration and fermentation of the honey."

Mussen says the beetle-infested honey has an unforgettable "off-citruslike smell to it."

So, it thrives in warm, humid climates. But that doesn't mean it's not in the colder climates. It simply spends the winter clustering with the honey bees. 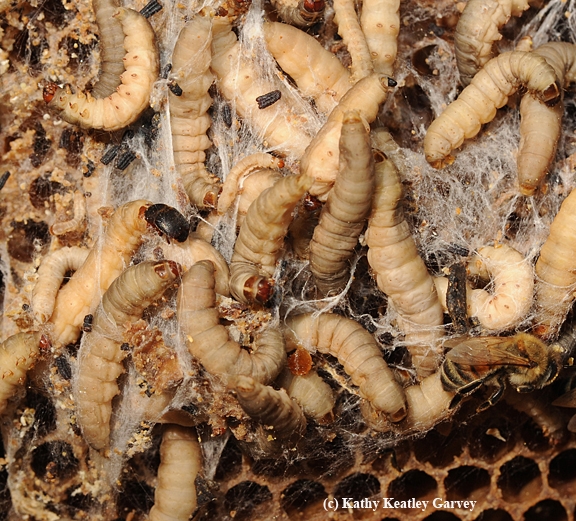