Soon beekeepers from around the country will be trucking their bees to California for the annual almond pollination.

California has some 700,000 acres of almonds, with each acre requiring two hives for pollination.

But an article in the Dec. 27th edition of the New York Post raises a serious question: How healthy are the honey bees?

Since colony collapse disorder (CCD) became the buzz word in the fall of 2006, just how healthy are the bees now?

Well, CCD is still with us, and the commercial beekeeper that sounded the alarm--Dave Hackenberg of Pennsylvania--says this winter could be the worst yet.

Hackenberg told The Post that "We had around 3000 hives at the end of the summer, but they started shrinking early, so when we came to truck them to Florida, there was only 2000 of them left."

He said that he wouldn't be surprised if one-fifth of his bees died before spring. "We're hoping we can stop at 50 percent losses," Hackenberg told reporter Alison Benjamin.

CCD, the mysterious malady characterized by adult bees abandoning the hive--leaving behind the queen and brood--continues to wreak havoc.

That's why honey bee research is so important. 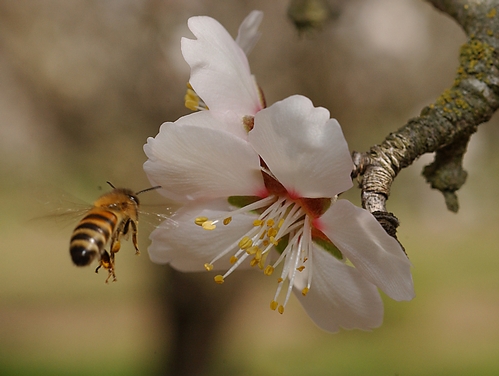 Beeline to Blossom
HONEY BEE makes a beeline to an almond blossom on the grounds of the Harry H. Laidlaw Jr. Honey Bee Research Facility at the University of California, Davis. California's annual almond pollination begins in February. (Photo by Kathy Keatley Garvey) 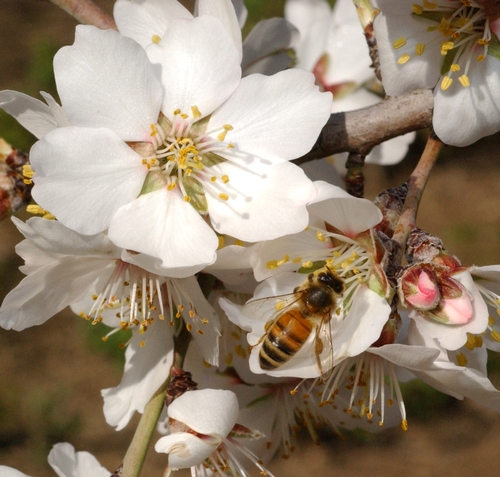