Bug Squad
sitenum=63
Happenings in the insect world
The First Bumble Bee of the Year! Allan Jones found the first bumble bee of the year on Jan. 27 in four-way contest covering the Yolo County area. Here, in a summer photo, he looks up toward the praying mantis on his hat. (Upper right.) (Photo by Kathy Keatley Garvey)
Remember that recently concluded contest to find the first butterfly of the year?

Arthur Shapiro, distinguished professor of evolution and ecology at UC Davis, annually sponsors the "Beer for a Butterfly" contest, offering a pitcher of beer for the first cabbage white butterfly (Pierae rapae) of the year found in the three-county area of Sacramento, Yolo and Sacramento. He launched the contest in 1972 as part of his  long-term studies of butterfly life cycles and climate.  This year he again won the contest; he collected a newly eclosed butterfly at 1:56 p.m. Thursday, Jan. 19 near the Solano Park Apartments on the UC Davis campus.

But where's the first bumble bee of the year in the Yolo county area?

The story behind the story: five years ago, a small group of keen-eyed bumble bee aficionados (Robbin Thorp, distinguished emeritus professor of entomology at UC Davis and co-author of Bumble Bees of North America: An Identification Guide; and three naturalists and insect photographers Gary Zamzow and Allan Jones of Davis, and yours truly of UC Davis) launched our own contest. In an unusual twist, Jones found both genders at the same time. After finding and photographing two males just east of the Arboretum's redwood grove, he spotted and photographed a female just west of it.

"Surprising to see males this early in the season," noted Thorp, who co-authored the  book, California Bees and Blooms: A Guide for Gardeners and Naturalists. "Unusual to see males before any workers are on site.  Could be from a gyne that overwintered but was not mated before she went into hibernation; or maybe the sperm she received were not viable; or maybe she was unable to release sperm from her spermatheca to some eggs as they passed through her reproductive tract."

The manzanita bushes looked to be "at the end of their blooming cycle," Jones wrote in an email, while looking forward to seeing more bumble bee species (Bombus californicus and Bombus vosnesenskii) soon. "P.S., I would pat myself on the back if I were a little more flexible." 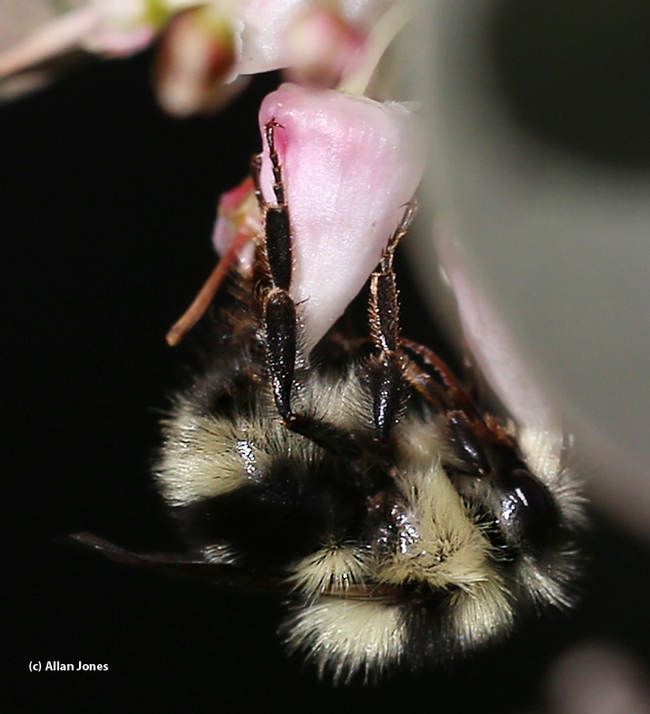 A male three-banded bumble bee, Bombus melanopygus, on manzanita on Jan. 27 in the UC Davis Arboretum. (Photo by Allan Jones) 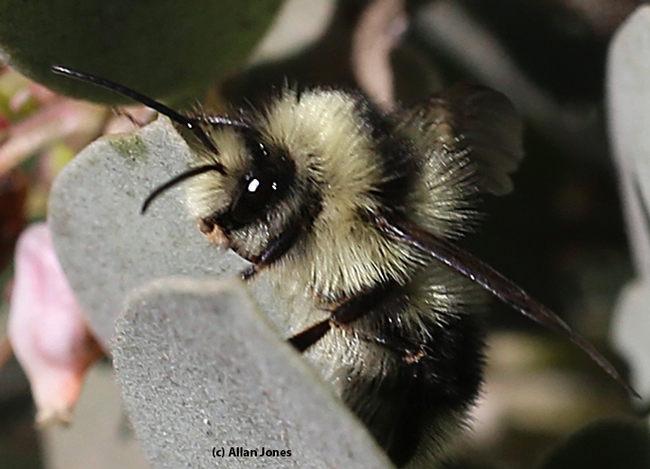