Bug Squad
sitenum=63
Happenings in the insect world
A Gathering of Lepidopterists: Who's Who of the Butterfly, Moth Experts Underwing moths, genus Catocala. (Photo by Kathy Keatley Garvey)
It was a gathering of lepidopterists.

A veritable Who's Who of lepidopterists.

Some 25 lepidopterists and others interested in butterflies and moths gathered recently at the Bohart Museum of Entomology, UC Davis, to work on identifications, share research information, and enjoy camaraderie.

Entomologist Jeff Smith, who curates the butterfly and moth specimens at the Bohart Museum, coordinated the event with fellow Bohart Museum associate John Debenedictis. "It always takes place the last Saturday of January," Smith said. "We alternate each year between the Bohart Museum and the Essig Museum at UC Berkeley."

"John and I sort of work together every other year to host this gathering at the Bohart Museum," Smith said, "although it doesn't really involve much work on our part since all the attendees are self-winding and easily find ways to stay busy."

"We're a dying breed," said Kelly Richers of systematists. Richers, an Essig associate, was there working on underwing moths, genus Catocala, family Noctuidae. Catocala is Greek meaning "beautiful below." The common name, Underwings, "refers to the posture where the forewings are normally held together over the back at rest, hiding the hindwings beneath," according to BugGuide.net. "Hence, the hindwings are the (bold and beautiful) underwings that this genus is known for." Richers compiles the California Moth Specimen Database, maintained at the Essig Museum since 1996 as a resource to better survey and understand California moths.

If anyone had asked "Is there a doctor in the house?" scores of entomologists with Ph.Ds may have raised their hands, if they weren't too busy studying or discussing specimens. But there was at least one medical doctor there--Val Albu of Fresno, who was conferring with Bohart associate Jerry Powell, emeritus director of the Essig Museum, emeritus professor of entomology at UC Berkeley, and author of California Insects. Powell's expertise includes the New World Tortricinae (Tortricoidea) and Ethmiinae (Gelechioidea).

Marc Epstein, senior insect biosystematist for the California Department of Food and Agriculture and author of the newly published book, Moths, Myths and Mosquitoes: the Eccentric life of Harrison G. Dyer Jr., discussed specimens with Jeff Smith and Steve Heydon, senior museum scientist at the Bohart.

Photos of the newly discovered moth, Neopalpa donaldtrumpi, briefly drew the attention of the lepidopterists. Bohart Museum associate/research entomologist Thomas "Tom" Zavortink and colleagues collected the tiny moth with the orange-yellow and brown wings in the Algodones Dunes, bordering Arizona and the Mexican state of Baja California. The moth was among insects loaned to evolutionary biologist and systematist Vazrick Nazari of Canada, who sifted through the collection and made note of the new species. He named it after President Trump, and published the data Jan. 17 in the journal ZooKeys.

The Bohart Museum is directed by Lynn Kimsey, professor of entomology at UC Davis, is the home of nearly eight million specimens, collected globally. The museum, located in Room 1124 of the Academic Surge Building, Crocker Lane, is open to the public Monday through Thursday and also hosts special weekend open houses.

Meanwhile, the Bohart is gearing up for the sixth annual UC Davis Biodiversity Museum Day when the Bohart will be one of 12 museums or collections open to the public. The event, open from 9 a.m. to 4 p.m., will "showcase natural history, biodiversity and the cultural-ecological interface," said coordinator Tabatha Yang, education and outreach coordinator for the Bohart Museum. The open house is free and open to all; parking is also free. All collections are within walking distance on campus except for the Häagen-Dazs Honey Bee Haven on Bee Biology Road for the Raptor Center on Old Davis Road. 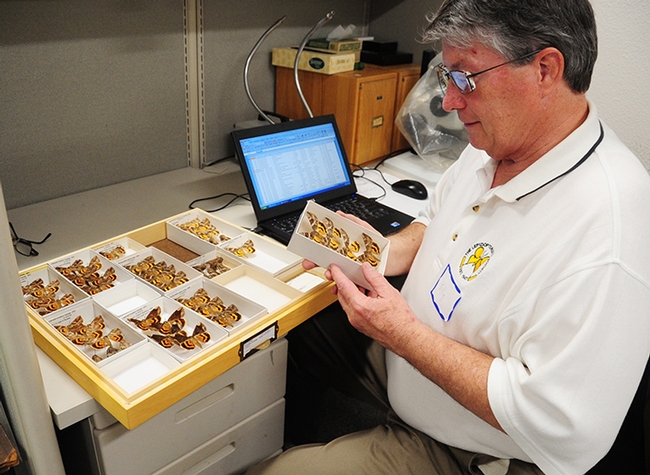 Essig Museum associate Kelly Richers works on underwing moths at the gathering of lepitopderists at the Bohart Museum. (Photo by Kathy Keatley Garvey) 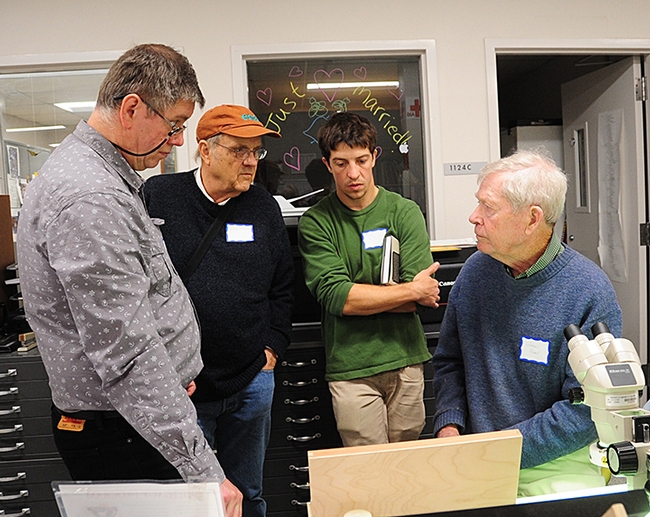 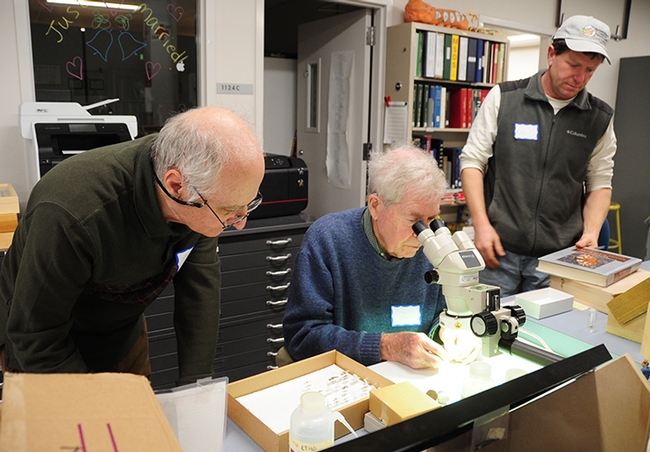 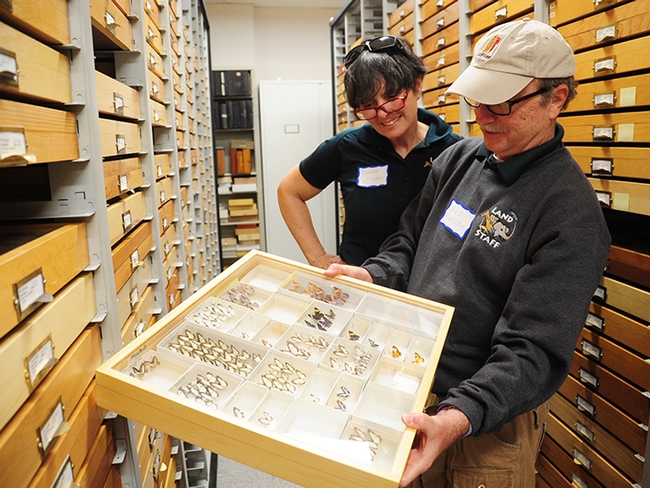 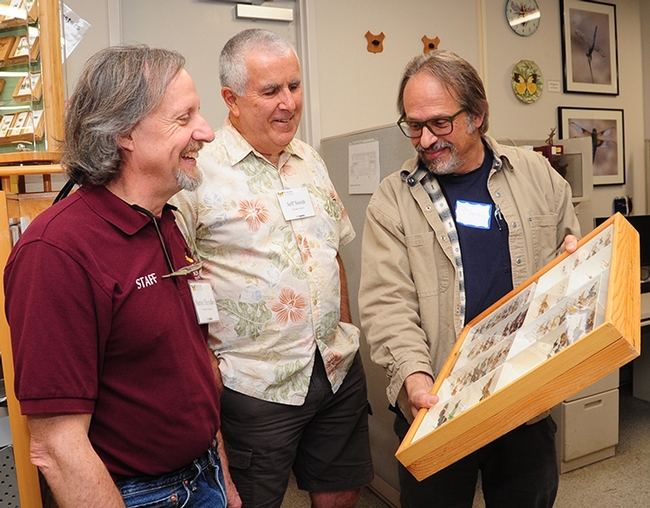 Conferring are Steve Heydon, senior museum scientist at the Bohart Museum, Jeff Smith,curator of the Bohart's butterfly and moth specimens, and Marc Epstein, senior biosystematist for the California Department of Food and Agriculture. (Photo by Kathy Keatley Garvey) 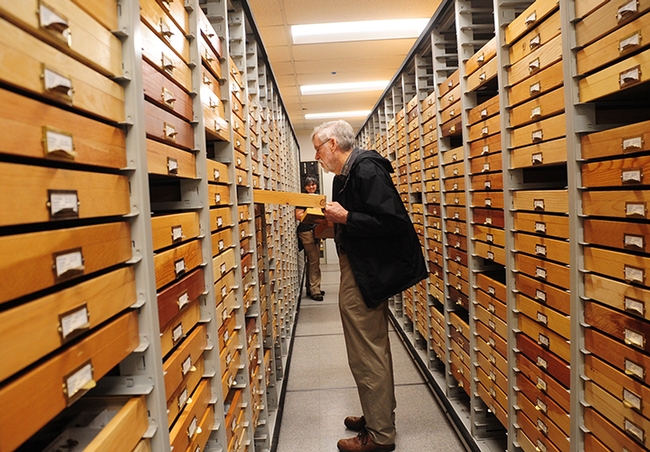