Bronze Bug: A New Threat to Eucalyptus Trees in California
Published on: June 12, 2017

[From the May 2017 issue of the UC IPM Green Bulletin] Fig 1. Bronze bug adult. [G. Arakelian]
The bronze bug (Thaumastocoris peregrinus) (Fig. 1), a serious and potentially damaging, sap-sucking insect pest of eucalypts, has very recently been detected in southern California. This pest is reported to destroy extensive areas of leaf tissue, often giving it a bronze tint, turning it yellow, red, and then brown to tan. Damage from the bronze bug eventually leads to leaf loss, canopy thinning, branch die back, and even tree death. A wide host range and its ability to survive in a variety of climate zones have made this small pest especially invasive.

Native to Australia, little was known about the bronze bug prior to 2002 when significant populations of the pest suddenly occurred on ornamental landscape plantings in Sydney. This pest spread rapidly to countries in Africa, Europe, South America, New Zealand, and now the United States. Fig 2. Eucalyptus tree. [D. R. Hodel]
The bronze bug was first detected in California in early June 2016, on Eucalyptus in North Hollywood. It was found again in July in Long Beach on E. globulus (blue gum). These sightings are new records for North America but the pest is likely to be much more widely spread in eucalypt-rich southern California.

Adult bronze bugs have a flattened, elongated body and are 2 to 3 mm long (Fig. 1). They are light brown, often shiny, and have darker or reddish brown areas. The head is broad with bulging, red eyes and elongate, conspicuous mouthparts. Antennae are light brown with black tips.

Eggs are lain in clusters on leaves and twigs (Fig. 3) and are dark, oval, 0.5 mm long, 0.2 mm wide and appear as tar-like marks (Fig. 4). Crawlers and young nymphs are orange with dark brown spots on their thoraxes and some abdominal segments. Eyes and the area around dorsal abdominal scent glands are red (Fig. 5). Bronze bug adults and nymphs typically occur together on the same leaf. Developmental time is about 20 days at temperatures from 63-68°F with 5 instars. Adult females live about 15 days and a female can lay up to 60 eggs. Eggs hatch in 4 to 8 days and nymphal time is 17 to 25 days.

The bronze bug is thought to have dispersed to new regions primarily on infested plant material. Eggs can be borne on bark, flowers and inflorescences, and fruit; adults, eggs, and nymphs on leaves and seedlings; and eggs and nymphs on above-ground stems, shoots, trunks, and branches. Within a region, long-distance flight is thought to be the primary method of dispersal although wind and birds are also implicated. It is also possible that this pest can hitchhike on travelers' clothes, aircraft, land vehicles, and luggage. Fig 4. Tar-like appearance of egg clusters. [G. Arakelian]
Because bronze bugs are gregarious and typically occur in substantial quantities with nymphs and adults together, the first indication of an infestation might be the pest itself and its black egg cases and black, shiny, varnish-like, tiny, pin-point fecal deposits (Fig. 6).

Initially, leaves can be heavily infested yet show no discoloration or other symptoms. To date, we have been unable conclusively to confirm or associate the typical leaf discoloration described in the literature for the bronze bug in California. Previous studies reported that as bronze bug populations build and feeding intensifies, leaves typically have irregular reddish, reddish yellow, or yellow-brown areas that have a general bronzy tint. However, these leaf colors and other abnormal-appearing growth patterns are common on healthy and pest-free trees across the genera Corymbia and Eucalyptus, and can also be due to other factors, including cultivation, senescence, and unexplained, normal physiological responses (Fig. 7). Advanced and or heavy infestations eventually lead to extensive areas of chlorotic and necrotic tissue that is tannish or silvery, as if chlorophyll has cleared in irregular patches. In these instances, abundant adults, nymphs, and black egg cases are typically visible. Severe infestations can lead to leaf loss, canopy thinning, branch die back, and even tree death. Severe symptoms are especially common on E. camaldulensis, E. grandis, and E. viminalis while in other species, symptoms are often less severe and include only silvering.

Because the bronze bug is primarily spread over long distances among urban centers by humans, better monitoring and control at transportation hubs is critical to prevent spread of this pest. Fig 6. Bronze bug life stages and fecal spots on leaf. [D. R. Hodel]
Biological control might be the most feasible way to control the bronze bug. Two parasitic wasps have been established as egg parasitoids of the bronze bug in Australia but their effectiveness has not been thoroughly assessed. Lacewings, assassin bugs, a predatory stink bug, and entomopathogenic fungi such as Beauveria bassiana and Erynia radicans, have been reported as natural enemies of the bronze bug in other countries. 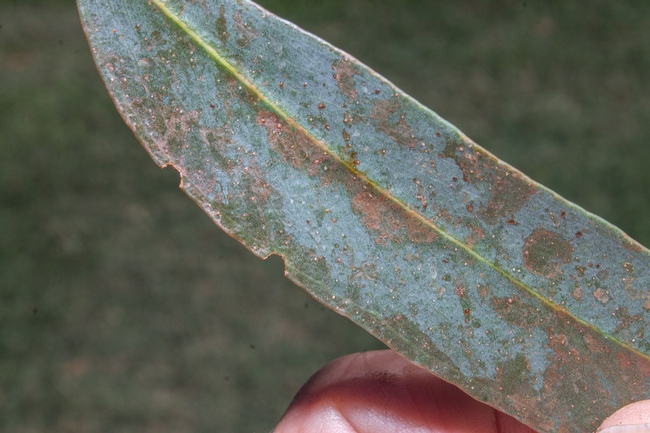