Italian White Snail on the Move in San Diego County

The Italian white snail aka white garden snail (WGS)(Theba pisana) has been in San Diego County for about 100 years. However, it has rarely caused significant damage to crops or gardens. Historically, it climbs up on weeds like mustards or fence posts in the day and during hot periods of the year and does not really move too far from abandoned fields or other relatively undisturbed areas.

In 20 years in my job here, I got a total of 1 call about it. However, about 6 weeks ago I went to a site in Escondido that bordered a weedy fallow field. That area had not been reported to have the WGS but they were clearly established there. The problem was that the snails had traveled to the adjacent property and were on almost all of the citrus and peach trees and groundcover. The avocado grove across the street was also impacted. WGS were on the tree trunks and leaves and this worried me more since they are not really a crop of choice for the more common brown snail. I thin drove down the street and observed small numbers of snails on walls and posts up to about 1/2 mile away. They are clearly expanding.

About 4 weeks later, I was at another small farm in Carlsbad and they asked me to the take a look at a snail problem. I expected it to be the brown snail and was shocked to it was also the WGS on their fruit trees. Even worse, that farm is next to cut flower growers who may be impacted not only from direct damage but restricted shipping since WGS is a B-rated pest.

B-rated pest (CDFA Pest Ratings): An organism of known economic importance subject to: eradication, containment, control or other holding action at the discretion of the individual county agricultural commissioner.

An organism of known economic importance subject to state endorsed holding action and eradication only when found in a nursery.

I am in the process of writing an advisory for ornamental plant growers. I am also doing some limited tests to see what can be done to reduce its impact. However, I wanted to get this out ASAP so people can be on the lookout. If you see it drop me a line here of by email (cawilen@ucanr.edu). I am very concerned that this snail will have a bigger impact on production and landscapes than the brown snail.

Description: White or light tan, about the side of a dime or nickel when full grown (sorry - I only had a quarter when I took the photo). May or may not have brown markings on the outside. Inside shell color of opening is light colored (milk snail looks similar but has a dark inside shell). 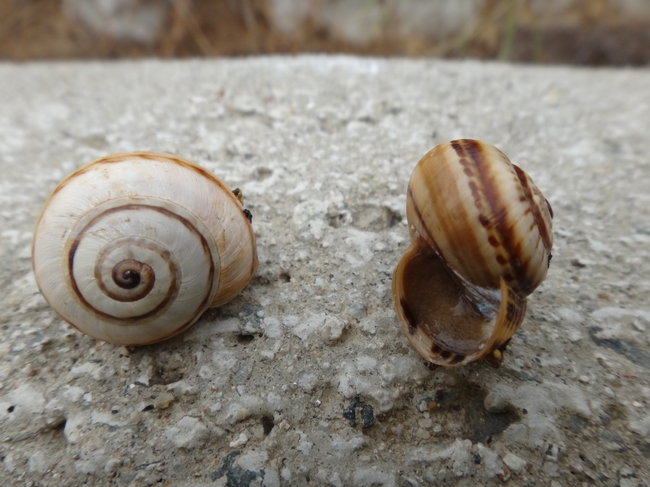 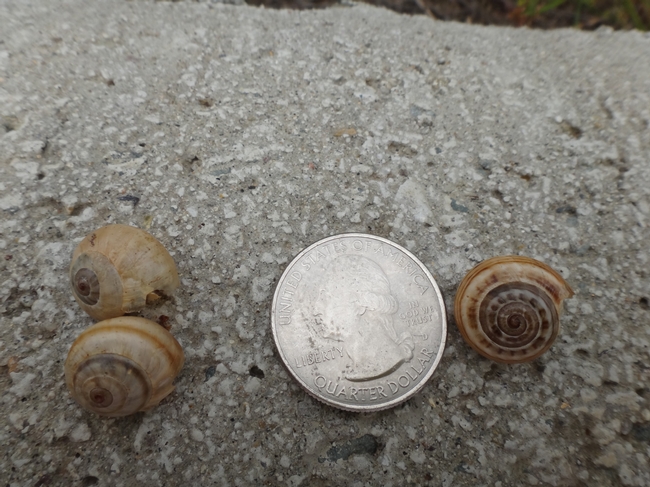 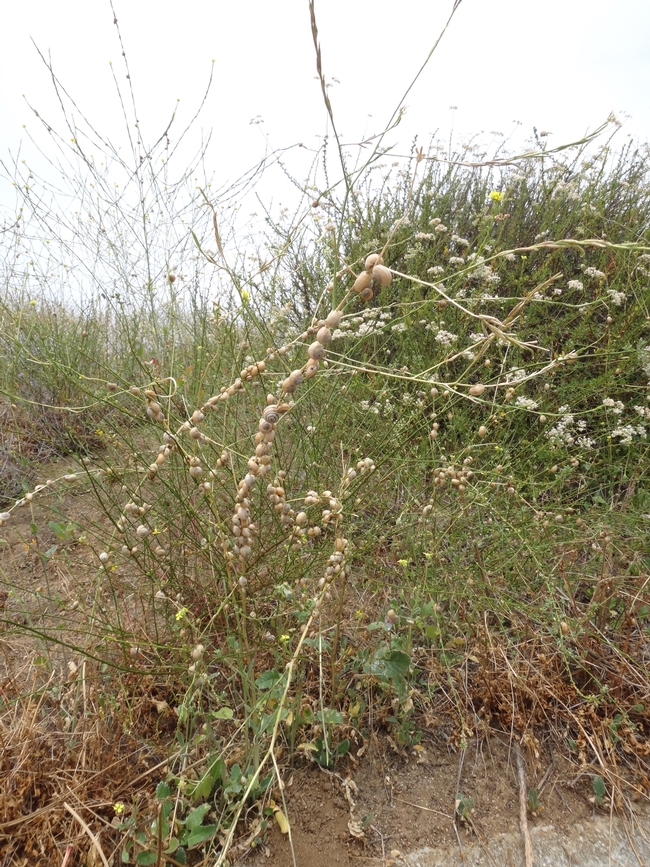 Tags: snail (1), theba (1)
Comments: 8
Comments:
by Kurt Peacock
on November 16, 2017 at 7:42 PM
Hi Cheryl I'm a local Consulting Arborist that has found a large number of these snails in the Otay Ranch area of Chula Vista along Olympic Parkway east ofvEastlake Parkway and the Wolf Canyon open space.These snails killed 3 15 gal Torrey Pine trees planted there in 4 months time. Regards Kurt
by Kurt Peacock Consulting Arborist
on August 28, 2018 at 8:32 AM
The Snail is exploding in Otay Ranch area of Chula Vista.It has killed 35 young Sycamores and Torrey Pines planted by Tree San Diego in last 14 months.Help!Numbers likely in the 10,000 to 100,000 + range.
by Naiomi Casillas
on May 30, 2019 at 9:18 AM
I also live in Otay Ranch and yesterday while on a walk I noticed the plants, trees, signs, and walkways near the corner of EastLake Parkway and Hunt Parkway to be covered in snails. You could not walk without crushing them. The shear number of snails is to great to even estimate. I’d compare the site to how the bottoms of a boat might look, covered in muscles after long periods of time in the ocean. Help please!
by Mary Ann wilson
on June 2, 2019 at 1:58 PM
I live in Escondido and noticed them last year and have had thousands all over my fruit trees and walls, garage door etc. this year. I have no idea what to do except I try and pull.scrape etc. to get them to the ground, where I have put snail bait. \Help Help
by JiHyang
on October 23, 2019 at 10:16 PM
Many of these snails in the San Elijo Lagoon, La Orilla trail, near where the construction closure is located.
by mark Van Milligan
on October 31, 2019 at 9:56 AM
I park my truck across the street near an open field on eastgate mall corridor by our business. The field weeds had WGS on them. They traveled on my truck tailgate to my house. I looked at the back of the truck and peeled them off and crushed them to death as I didnt want them in my garden in north park. I knew what they were. They are infesting all the field weeds here.
by Teresa Morales
on May 24, 2020 at 10:21 AM
Cheryl, Teresa M here from Otay Mesa/Chula Vista area. These snails are killing my backyard plants. It doesn’t matter how much snail bait I put out, they just keep multiplying. Pest control put their stuff out, but the little buggers are still here. I even put out trays of beer....didn’t care for the beer....HELP!! Salt water spray is next...will keep you updated..frustrated in Otay!!
by Susie scholpp
on September 15, 2020 at 12:49 PM
I saw the snails in colonies on my neighbors lot in Half Moon Bay. Their climbing over my fence. Please please come out immediately to help.me and get samples. Thank you
Login to leave a comment.