Friday the 13th is not an unlucky day--not when migratory monarchs make a pit stop at your home on their way to their overwintering sites.

Today a male monarch fluttered into our pollinator garden in Vacaville, Calif., and sipped nectar from a tropical milkweed. We offered him a choice: Mexican sunflower, lavender, verbena, butterfly bush, sedum, lantana or the tropical milkweed.

"Make mine milk (weed)," he seemed to say as he lingered on the plants.

We're hoping his buddies will stop by, too. Any time.

Friday the 13th is considered an unlucky day in Western superstition, according to Wikipedia. "It occurs when the 13th day of the month in the Gregorian calendar falls on a Friday, which can be the case at least once every year, and up to three times a year. In 2017, it occurs twice, on January 13 and October 13. There will be two Friday the 13ths per year until 2020, where 2021 and 2022 will have just one occurrence."

In its online entry, Wikipedia outdoes itself. It lists all the Friday the 13ths that have occurred since 1900, and will occur until 2100.

There's even a special name for it: "paraskevidekatriaphobia." That's Greek. Paraskeví means Friday, and dekatreís, 13. American psychotherapist Donald E. Dossey (1934-2016), who specializied in phobias and stress management, coined the term in the early nineties. He reportedly claimed that anyone able to pronounce the word would be cured of it.

"Paraskevidekatriaphobia" does not exist in our household. Indeed, Friday the 13th is a lucky number. Our son is a Friday the 13th baby. So when that day rolls around--no matter how many times a year--we rejoice.

It's a bonus when monarchs flutter into our yard. 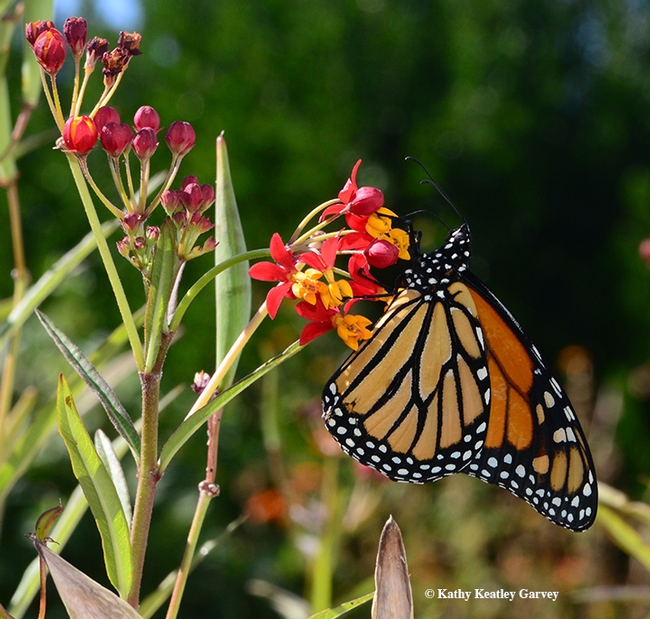 A male monarch nectaring on tropical milkweed on Friday the 13th in Vacaville, Calif. (Photo by Kathy Keatley Garvey) 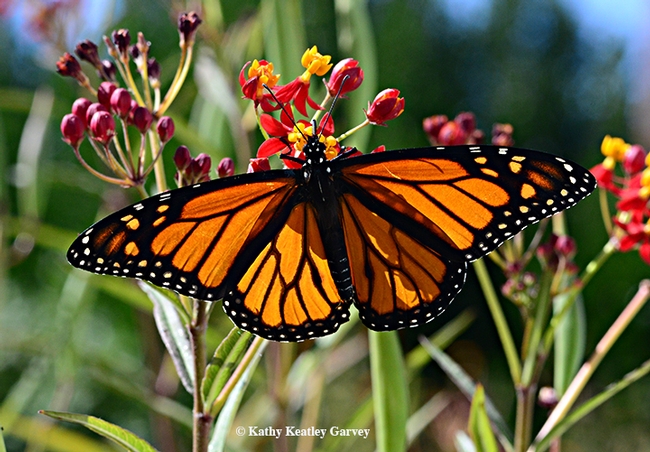 A male monarch spreads its wings on a tropical milkweed. (Photo by Kathy Keatley Garvey)
Tags: Dossey (1), Friday the 13th (1), monarch butterflies (82), paraskevidekatriaphobia (1), tropical milkweed (18)
Comments: 2
Comments:
by Emuobo Madago
on March 13, 2020 at 7:19 AM
Friday the 13th has no doubt proven to be a bad day for many people in the past and present; that is why people in the world today still believe it to be an unlucky day. I happen to believe that no day is unlucky, that things are bound to occur as a result of our actions and decision. The article has really gotten my interest. I am going to bookmark your blog and keep checking for new details every week.
by smonow
on April 25, 2021 at 10:27 AM
This is really interesting, You're a very skilled blogger.
I have joined your rss feed and look forward to seeking more of your wonderful post.
Leave a Reply: