It's about the size of a grain of rice but it's a killer.

Enter doctoral student Jackson Audley of the Steve Seybold lab, UC  Department of Entomology and Nematology. He will present a seminar on "Protecting Trees from Bark Beetle Attacks Utilizing Semiochemical Repellents: A Case Study with the Walnut Twig Beetle” at a seminar from 4 to 5 p.m., today (Wednesday, Oct. 25) in Room 3001 of the Plant and Environmental Science Building.

The seminar is part of the UC Davis Forest Biology Research Center Seminar Series and his presentation is a preview of his thesis project.

"In this talk I will discuss the theoretical construct of semiochemical repellents for protecting trees from attack by bark beetles and demonstrate the process of developing a repellent tool with my work on the walnut twig beetle, Pityophthorus juglandis, the vector of thousand cankers disease in walnuts," Audley says in his abstract. "Bark beetles can constitute a significant threat to tree health and are a significant disturbance agent in forest ecosystems. Semiochemicals have been successfully utilized to protect individual to stands of susceptible trees from various bark beetle pests. Most of this work has been conducted in coniferophagous bark beetle systems. My work here at UC Davis has been focused on bringing those same techniques into studying an invasive, hardwood-attacking bark beetle system."

The walnut twig beetle is believed to be native to Arizona, California, New Mexico and Mexico.  In 2006, plant pathologist Ned Tisserat and entomologist Whitney Cranshaw of Colorado State University identified the pathogen in declining black walnut trees in central Colorado. The disease has now spread throughout much of the United States.

"Often the first symptoms of thousand cankers disease (TCD) are flagging and yellowing leaves and branch dieback," says Seybold, one of the pioneering TCD researchers. He is a chemical ecologist with the USDA Forest Service, Pacific Southwest Research Station, Davis, and a lecturer/researcher with the UC Davis Department of Entomology and Nematology. "Affected branches show sap staining and pinhole-sized beetle holes. Beneath the surface are dark stains caused by the fungus."

"The fungus enters the tree through the feeding or reproductive activities of the beetle, and colonizes and kills the phloem and cambium of the branches and main stem," according to the UC Integrated Statewide Integrated Pest Management Program website, content that's the work of Steve Seybold and entomologist Mary Lou Flint, then associate director of of Urban and Community IPM, and now UC Extension entomologist emerita. The disease gets its name from the large number of dark cankers that rapidly develop on affected branches.

The UC Davis Forest Biology Research Seminars, which began Oct. 11, are held Wednesdays at 4 p.m. in Room 3001 of the Plant and Environmental Science Building. 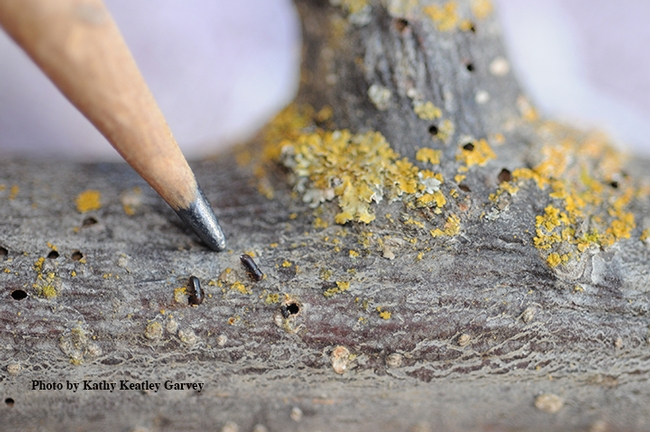