Pesticide Horrors from the CA Deptartment of Pesticide Regulation
Published on: October 31, 2017 With Halloween again upon us, what better time to unearth a few true horror stories of reported pesticide accidents from DPR and county agricultural commissioners' records?

These recent tales illustrate the perils of misusing or carelessly handling pesticides. Sadly, they were all avoidable.

The point of sharing them is not to embarrass anyone, but, rather, to educate people. As such, DPR is withholding names and some other details that could identify the people involved.

Hopefully, sharing these true horror stories can prevent future injuries or even deaths.

One such incident in April involved a toddler in Los Angeles. The girl, just 21 months old, was in her family's backyard when she accidentally drank pesticide from a small cup she found.

Investigators from the Los Angeles County Agricultural Commissioner's Office determined the cup contained a pesticide, from Mexico, that is illegal to use in California. The active ingredient was dichlorvos which can affect the nervous system.

It was left in the yard by the girl's father. He told investigators he put it there to kill spiders.

The girl began suffering symptoms including runny nose, watery eyes, and redness of the skin. Her mom took her to USC Medical Center for treatment. Thankfully, she was able to be released the following day.

At least two morals that can be drawn from this chilling tale. …

“LA CAC staff advised the child's father to keep pesticides in their original containers and not to place or keep any pesticide product in any container of a type commonly used for food, drink or household products,” reads part of the report, submitted to DPR. It notes that improper storage is illegal.

“Also, the county staff informed the family that only products registered with DPR should be used. Considering the circumstance, the LA CAC's office did not take an enforcement action and the investigation is now closed.” Storing pesticide in food or beverage containers is dangerous and illegal. (San Diego CAC)
Heeding advice about pesticide storage would have helped a San Juan Capistrano woman who, in April, accidentally drank some weed killer.

According to the Orange County Agricultural Commissioner's Office, the woman saw a juice bottle in her husband's work truck and brought it into the house.

She poured the contents over ice and drank it. But instead of it being a cool refreshing drink it was a dangerous one. And it tasted awful. Sensing something amiss, she asked her husband – a gardener – what was inside? It was glyphosate – a common herbicide.

They went to the local hospital where the woman experienced diarrhea and was kept overnight. The family was contacted by an ag commissioner's office investigator who explained the importance of not storing pesticides in food containers.

“The family now knows not to store pesticides in food containers,” the ag commissioner's office says.

The gardener would surely have known not to store pesticides in food containers had he been licensed by DPR, which is a requirement to legally apply pesticides as part of his job.

HORROR ON THE BLEACH!

Many people don't know, or forget, that bleach can be a pesticide. It's used in a number of products to kill bacteria and other organisms. As such, bleach cleaners should be handled with care, which includes following instructions on the bottle. The labels will tell you, for instance, not to mix with other chemicals.

This was a mistake made by a Cathedral City woman in April.

She'd heard from a friend that a solution of bleach and vinegar is good for controlling flies. In fact, unbeknownst to the woman, mixing bleach with acids, like vinegar, can produce dangerous chlorine gas that is harmful to humans – not just tiny flies! (Note: Chlorine gas was used as a chemical weapon in WWI.).

After mixing these chemicals at her home, the woman began to have breathing difficulties.

She went to Borrego Health/Centro Medico in Cathedral City where she was treated with oxygen for breathing difficulties. Luckily, she was sent home the following day.

The Riverside County Agricultural Commissioner's Office provided her with education and outreach materials. No fines were levied, which is standard protocol for the office in cases where residents experience such accidental pesticide exposures.

Another scary reminder about not mixing bleach with other cleaners was reported in September 2016.

According to a report from the Merced County Agricultural Commissioner's Office, a woman had cleaned a toilet in her house with a mixture of ammonia and bleach. She put the toilet lid down and left for the day.

Unaware of the toxic brew left in the bowl, her husband used the toilet. Upon flushing, he got a “massive whiff” of toxic chloramine gas – the result of mixing chlorine with ammonia. He began coughing, and felt substantial chest tightening and throat irritation. His father took him to Los Banos Memorial Hospital where he was given breathing treatment.

Thankfully, he was discharged a few hours later -- improved and wiser. Merced Ag Commissioner's investigators advised his family that when cleaning the toilet in the future, it is best not to mix or combine products, and to read the product labels thoroughly before use.

BEWARE OF THE FOG

So readily available and common, it seems people sometimes forget that foggers (or “flea bombs”) need to be handled with great care.

As with any pesticide, always follow the use instructions on the containers, including guidelines for placement, and exiting immediately and waiting time before reentering the areas being treated.

Case in point: In April, a 54-year-old Murrieta man set off two foggers in his home – one in a closet and another in his bedroom.

According to a report from the Riverside County Ag Commissioner's Office, he didn't leave the room immediately and, he later reported, began feeling dizzy, had difficulty breathing and began coughing. He took a shower hoping it would help alleviate his symptoms but, when this failed to help, he went to the hospital.

In the emergency room at Rancho Springs Medical Center in Murrieta, he was given oxygen and bronchodilators for his breathing difficulties. He was released the same day.

A similar case, in June, involved an 84-year-old Riverside man. He told an investigator he'd set off a fogger in his house to control lice. Shortly after the treatment began, he entered the house to retrieve medication for COPD that he'd left indoors. He inhaled some of the fogger chemical and began coughing, and felt dizzy and nauseous.

He went to the emergency room at Riverside Community Hospital in Riverside where he was given oxygen for his breathing difficulties, and was released the same day.

The ag commissioner's office provided him with education and outreach materials. No fines were levied, which is standard protocol for the office in cases where residents experience such accidental pesticide exposures.

A “WHICH IS” TALE

One of two final stories to end this dispatch illustrates the importance of care in handling pesticides. In March, an Irvine man was hospitalized after accidentally ingesting an insecticide for fleas.

According to Orange County Agricultural Commissioner's investigators, the man had asked his mother-in-law to send him a cough medicine available in Mexico, called Benzonatato.She went to a pharmacy in Tijuana, bought what she thought was the right product, and shipped it to him.

“He took the two teaspoons, which was his normal dosage, but this time it tasted different. He took a look at the bottle and almost everything looked the same. The same sized bottle, the same color and almost the same name,” according to the ag commissioner's office.

However, instead of Benzonatato, the package contained a bottle of Benzoato de Bencino, which comes in a similar looking bottle, according to investigators.

The man – vomiting – called Poison Control and was directed to the emergency room at Hoag Hospital.

Luckily, after four hours under observation, he was released and had reportedly recovered the next day.

“(The man) and his mother-in-law now know to look carefully at wording on the bottle before purchasing or ingesting,” says an ag commissioner's description of the incident.

THE BREAD ZONE (WHERE NOT TO USE OR STORE PESTICIDES)

A second incident, reported in May, involved a Cathedral City woman who accidentally ingested ant and roach killer. According to the Riverside Ag Commissioner, the woman was making a sandwich with bread that, unbeknownst to her, had been stored in a cabinet treated with an ant-and-roach killer, applied by the woman's boyfriend.

She went to the emergency room at Desert Regional Medical Center in Palm Springs where she was given pain medication and anti-nausea medicine. She was released the same day.

The ag commissioner's office provided her with education and outreach materials, along with a reminder to always heed warnings on the label to avoid harmful accidental contamination. No fines were levied. 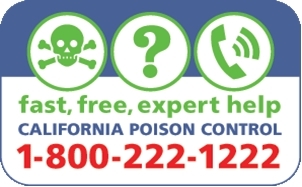