This photo, taken when Matan Shelomi was a UC Davis graduate student, shows him with a stick insect, subject of his dissertation. (Photo by Kathy Keatley Garvey)
Ever ask someone where they live and they respond "I live in the sticks"? They're referring to a rural area, usually forested or farmed.

Next week UC Davis alumnus Matan Shelomi will introduce you to his "sticks": the stick and leaf insects from the order Phasmatodea that he studies.

He'll present a seminar from 4:10 to 5 p.m., on Wednesday, Nov. 15 in 122 Briggs Hall, University of California, Davis, on "Revelations from Phasmatodea Digestive Track Transcriptomics." Hosted by the UC Davis Department of Entomology and Nematology, the seminar is open to all interested persons.

Originally from New York City, the Harvard graduate (bachelor's degree in organismic and evolutionary biology) obtained his doctorate in entomology in 2014. He then received a National Science Foundation-funded postdoctoral position at the Max Planck Institute for Chemical Ecology in Jena, Germany. His past research has focused on the digestive physiology of the stick and leaf insects, Phasmatodea, although he is currently studying the microbiome of dengue-vectoring mosquito breeding sites. Matan Shelomi's colleagues, entomologists Ivana Li (left) and Fran Keller created this "Know Your Sticks" t-shirt, available for sale in the Bohart Museum of Entomology's gift shop. (Photo by Kathy Keatley Garvey)
And now he's returning to his UC Davis roots to talk about his stick and leaf insects research. And answer questions.

"The stick and leaf insects (order Phasmatodea) are an unusual, herbivorous order more closely related to webspinners and cockroaches than to grasshoppers and crickets," Shelomi says in his abstract. "Neither serious pests nor disease vectors, their biology has been poorly studied, yet recent work has revealed just how little we knew about their inner workings. Exclusive leaf-feeders, it was not known how they are able to thrive on such a diet and reach their record-setting lengths."

He will present the results of his research on Phasmatodean anatomy and evolution, spanning seven years and three continents.

Shelomi points out: "Using transcriptomics—the study of what genes are expressed in a given tissue at a different time—one can discover what enzymes are produced by the digestive tissues, what compounds are eliminated by the excretory tissues, and even guess the functions of mysterious tissues such as the 'appendices of the midgut,' a Phasmatodea-specific organ system whose physiological role was unknown for over a century. The diversity of Phasmatodean digestive enzymes includes some surprising members whose evolution in Insecta is changing what we thought we knew. As mysteries are solved and old hypotheses revised, Phasmatodea exemplify the scientists' search for the unknown and the hidden secrets the natural world waits to reveal."

Matan says he plans to present an informal seminar, one that he hopes will be both entertaining and informative.

Stick insects are a key part of the Bohart Museum's live "petting zoo," which is opento the public Monday through Thursday. In fact, back in 2012, two entomologists/Bohart associates designed a humorous t-shirt inscribed with “Know Your Sticks," featuring drawings of four sticks: a stick person, a real stick or twig, a Vietnamese walking stick and an Australian spiny stick (family Phasmatidae). It's available for sale in the Bohart Museum's gift shop.

Bohart associate Fran Keller, who received her doctorate in entomology at UC Davis and is now as assistant professor at Folsom Lake College, originated the idea of a stick t-shirt--in between studying for her doctoral degree in entomology and serving as a Bohart associate/volunteer.  It was those stick figures trending on vehicle rear-windows that influenced and inspired her. “So we thought we'd clarify the sticks."

Keller designed the shirt. Ivana Li, then an undergraduate student and president of the UC Davis Entomology Club and now a staff research associate in the Department of Evolution and Ecology, drew the illustrations.

Don't be surprised if Matan Shelomi's former colleagues at the Bohart Museum show up in their "Know Your Sticks" t-shirts. 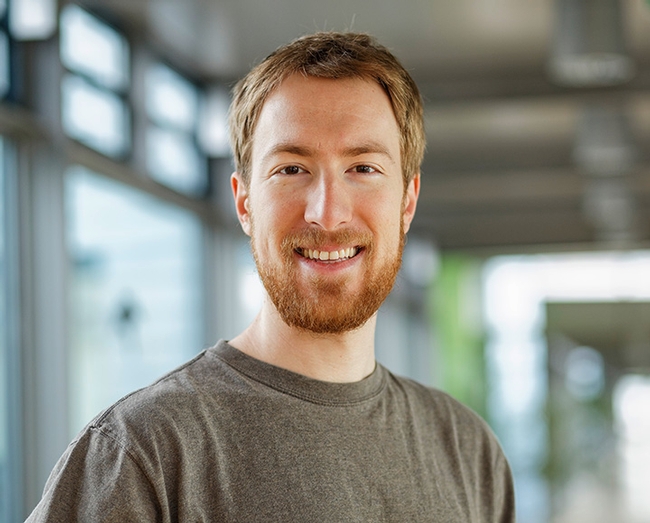 Matan Shelomi, who received his doctorate in entomology at UC Davis and his bachelor's degree at Harvard, will return to the UC Davis campus on Wednesday, Nov. 15 to deliver a seminar on his stick and leaf insect research. 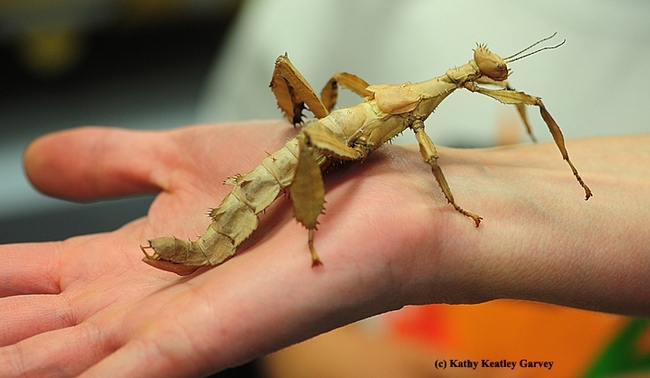 This is the insect that entomologist Matan Shelomi studies: the stick insect, order Phasmatodea. (Photo by Kathy Keatley Garvey)
Tags: Bohart Museum of Entomology (434), Lynn Kimsey (320), Matan Shelomi (16), Phasmaodea (1), stick insects (12), UC Davis Department of Entomology and Nematology (443)
Comments: 1
Comments:
by adil ayub
on February 13, 2018 at 9:26 AM
a great work. I like to work with you and like to complete my Ph.D research with you
Leave a Reply: