Bug Squad
sitenum=63
Happenings in the insect world
Bohart Museum Visitors: As Close as Davis and as Far Away as San Jose Entomologist Jeff Smith, who curates the moth and butterfly collection at the Bohart Museum, shows a spreading board to Sacramento visitors Amii Barnhard-Bahn and her daughter, Larkin, 15. (Photo by Kathy Keatley Garvey)

When there's a Bohart Museum of Entomology open house, visitors come to listen, learn and explore.

Such was the case during the Parasitoid Palooza open house last Saturday, Nov. 18 when area residents, including parents and their children, and grandparents and their grandchildren, visited the museum. They came from as near as Davis and as far as Redwood City, Sonoma, Marin, and San Jose.

They came with questions; they left with answers and a deeper appreciation of insects.

There is much to see and do. The Bohart Museum, located in Room 1124 of the Academic Surge Building on the UC Davis campus, is the home of nearly eight million insect specimens including about 320,000 in the Lepidoptera (butterflies and moths) collection, curated by entomologist Jeff Smith.

Those figures, however, are much like a moving target, "as we keep adding collections," commented Lynn Kimsey, director of the Bohart Museum and UC Davis professor of entomology.

"Yes, we are constantly adding material," Smith said, and "we may received very large donated collections in the next few years." Smith is almost finished spreading some 4000 specimens from an August Belize expedition."

The Bohart Museum is also the home of the seventh largest insect collection in North America, and the California Insect Survey, a storehouse of the insect biodiversity.

The Bohart Museum hosts special open houses throughout the academic year. Its regular hours are from 9 a.m. to noon and from 1 to 5 p.m. Mondays through Thursdays. The museum is closed to the public on Fridays, Saturdays and Sundays and on major holidays. Admission is free.

Upcoming open houses (all free and open to the public):

In tomorrow's Bug Squad blog: a close-up look at the family craft activities and human-insect interaction in the petting zoo at the Nov. 18 open house. 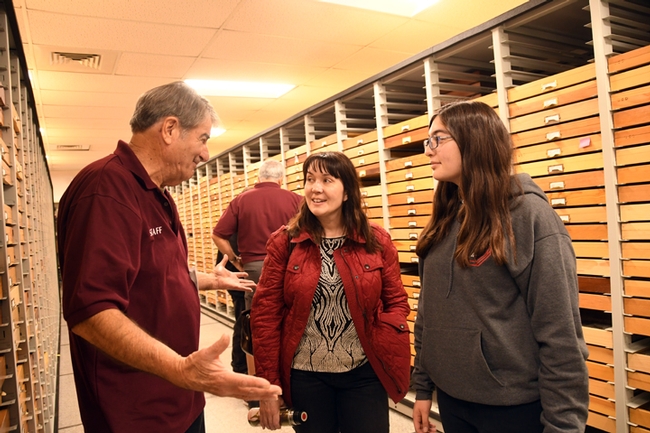 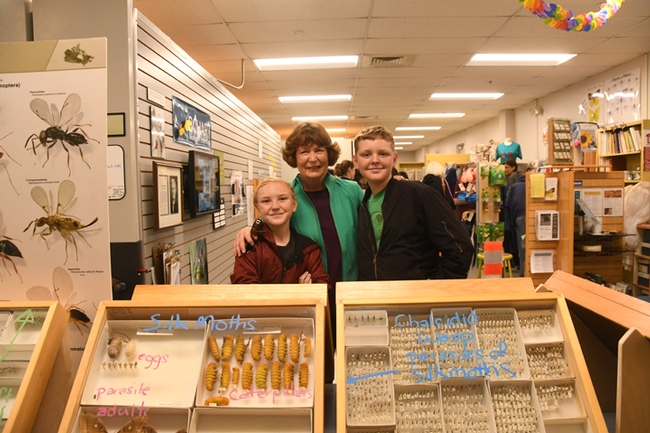 Kathy Ruiz of Davis, a member of the Yolo County Master Gardeners, visited the Bohart Museum with her grandsons Elliott Bren (left), 12, and Liam Bren, 14, of Sacramento. (Photo by Kathy Keatley Garvey) 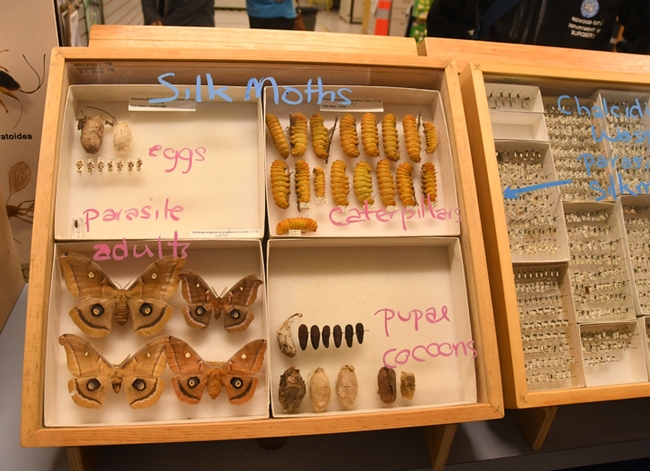 This display focused on silk moths and the life cycle stages, from eggs to caterpillars to pupa to adults. (Photo by Kathy Keatley Garvey) 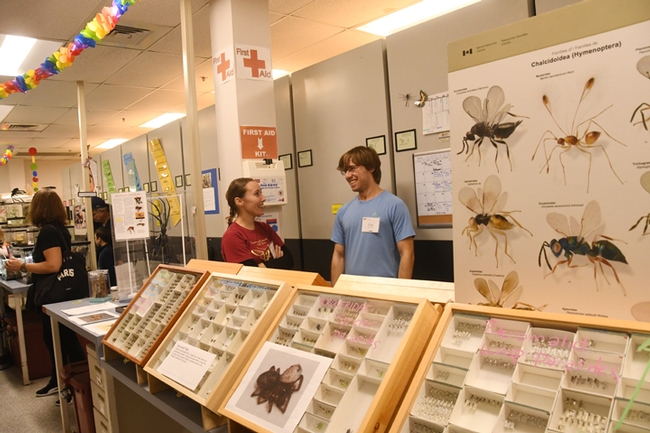