Elina Lastro Niño
Oh, how much this is needed!

Congratulations to the California Master Beekeeper Program, the newly announced recipient of a $199,949 grant from the UC Agricultural and Natural Resources through its 2017 Competitive Grants Program.

California Extension apiculturist Elina Lastro Niño, based at the UC Davis Department of Entomology and Nematology, is the principal investigator of the grant, titled "The California Master Beekeeper Program: Development of a Continuous Train-the-Trainer Education Effort for California Beekeepers."

"Honey bees are arguably the most important managed pollinator and are used as the primary pollinator for over 30 crops in California many of which are considered specialty crops such as almonds," wrote Niño in her successful grant application. "Therefore, the food security of our state and our nation depends largely on robust and healthy honey bee populations. However, in recent years, U.S. beekeepers have been reporting annual colony losses of up to 45 percent. These losses are attributed to many pathogens and pests associated with bees, as well as pesticide exposure and lack of access to plentiful and diverse forage." Bernardo Niño serves as the program manager of the California Master Beekeeper Program. (Photo by Kathy Keatley Garvey)
"Colony losses have also prompted those who have never kept bees before to try their hand at beekeeping in an effort to help honey bee conservation," Niño pointed out. "Currently, in California there are an estimated 11,000 backyard and small-scale beekeepers, with many of them belonging to one of 35 beekeeper associations within the state. While these associations often serve as hubs of information transfer, the information provided is not always accurate or supported by research findings. Considering the importance of California to the US agriculture and the fact that almost 80 percent of the U.S. colonies start their pollination and honey production routes in almonds, it is clear that there is an urgent need to develop a comprehensive, science-based, and state-wide apiculture curriculum."

Niño noted that "Development of these educational opportunities will help minimize potentially disastrous consequences, such as increased pest and pathogen transfer or spread of Africanized bees which are considered a public-health risk, due to lack of understanding of proper honey bee husbandry. To fulfill this need we established the first-ever California Master Beekeeper Program which provides California-centric, contemporary, research-based training in apiculture." California Master Beekeeper Program logo
In 2016, 56 participants successfully passed the Apprentice Level exams and "there are already 46 registrants for the 2017 Apprentice class with anticipated full roster of 75 participants," Niño wrote. The funding will enable the program to expand to the intermediate and advanced levels of the curriculum; create partnerships with advisers in UC Cooperative Extension (UCCE) offices throughout the state (UC Davis currently has collaborators in Fresno and San Diego); begin creating comprehensive web-based resources such as a library of on-line materials including an on-line classroom; and support the expansion of the program's educational apiary.

Currently, the program is overseen by an advisory committee consisting of UCCE specialists and advisers, Department of Entomology and Nematology research staff, the UC Davis Honey and Pollination Center staff at the Robert Mondavi Institute for Wine and Food Science, California beekeepers, and other apiculture specialists.

This program will establish UCCE and the Department of Entomology and Nematology (chaired by Professor Steve Nadler) in partnership with the Honey and Pollination Center (directed by Amina Harris) as a center of excellence in apiculture.

"Most importantly," as Niño wrote, "members of the program will serve as knowledgeable ambassadors that will disseminate science-based information about the importance of honey bees, preserving bee health and responsible beekeeping." 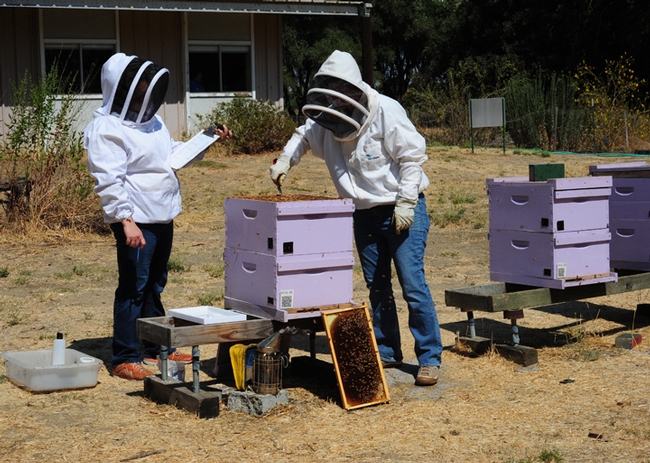 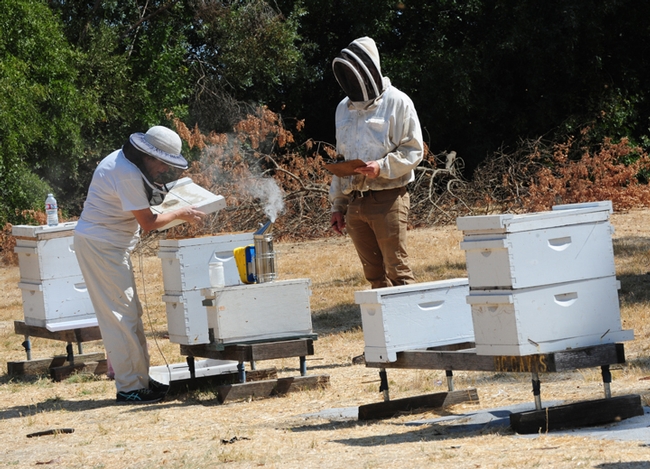 Beekeeper Charley Nye (right), manager of the Harry H. Laidlaw Jr. Honey Bee Research Facility, scores an applicant in the California Master Beekeeper Program. (Photo by Kathy Keatley Garvey)
Tags: Bernardo Niño (19), California Master Beekeeping Program (2), Charley Nye (5), Elina Lastro Niño (46), honey bees (379), UC ANR (17)
Comments: 2
Comments:
by ginger shepherd
on January 4, 2018 at 11:19 AM
What days are the Master Beekeeping program? I would love to participate if I could.
by Diane L. Metz
on March 13, 2018 at 9:45 PM
Clients in Yolo and Solano Counties are interested. Any plans for program to begin soon in Davis area?
Leave a Reply: