Outstanding achievement award winner Bruce Hammock addresses the crowd at the Eiosanoid Research Founation meeting in Puerto Vallarta, Mexico. (Photo by Caryn Volpe)
On the path to pain, a little pleasure can unfold.

His work on the enzyme, soluble epoxide hydrolase and its inhibitors, spans nearly 50 years of research. Human clinical trials of the Davis compounds aimed at controlling pain are expected to begin in 2018.

“The achievement award is lovely and probably the only thing I will ever own from Tiffany Jewelers,” quipped Hammock, who holds a joint appointment with the UC Davis Department of Entomology and Nematology and the UC Davis Comprehensive Cancer Center.

Hammock drew appreciation and applause from his colleagues following his plenary lecture on “Control of Acute and Neuropathic Pain by Inhibiting the Hydrolysis of Epoxy Fatty Acid Chemical Mediators: Path to the Clinic.”

In his talk, Hammock traced the history of his work to 1969 in the laboratory of UC Berkeley Professor John Casida. Hammock, where he was a graduate student and later a postdoctoral fellow. At the time, Hammock was researching insect developmental biology and green insecticides when he and colleague Sarjeet Gill (now a UC Riverside professor) discovered the target enzyme in mammals that regulates epoxy fatty acids.

“The work led to the discovery that many regulatory molecules are controlled as much by degradation and biosynthesis,” Hammock said. “The epoxy fatty acids control blood pressure, fibrosis, immunity, tissue growth, pain and inflammation to name a few processes.” Bruce Hammock was a graduate student and postdoctoral student at UC Berkeley when he began his research on soluble epoxide hydrolase. His work spans nearly 50 years.
Hammock went on to receive his doctorate in entomology/toxicology from UC Berkeley in 1973 and become a postdoctoral fellow there that year. His career then took him to the U.S. Army Academy of Health Science in San Antonio, Texas; to a Rockefeller Foundation Fellowship at Northwestern University, Evanston, Ill., and to UC Riverside, where he served as an assistant and associate professor before he joined the UC Davis faculty in 1980.

Since then, his laboratory has published almost 900 peer-reviewed papers in the epoxide hydrolase field.

“For many years Sarjeet and I were alone in studying this enzyme and pathway but now its importance is well recognized in mammalian biology with over 17,000 peer reviewed papers in the area,” Hammock said. “The importance of this pathway is now clear.”

“It is always important to realize that the most significant translational science we do in the university is fundamental science,” said Hammock, a native of Little Rock, Ark., who began his academic studies at Louisiana State University, Baton Rouge, where he received his bachelor's degree in entomology. “The epoxide hydrolase work is a great example going from developmental biology in butterflies to blood pressure and pain in man.  However, the extreme and poorly treated pain that I observed as a medical officer in a burn clinic in the Army, is a major driver for me to translate this knowledge to help patients with severe pain.  Hopefully, we can start human clinical trials next year.”

“One of the leaders in the lipid field--Bill Lands--stated that 'If the science is not fun, it should not be done.'  Certainly, the discovery of a new biochemical pathway that regulates so much of human biology is interesting, and the science to get there is grand fun. A great personal pleasure from this work has been the wonderful scientists that I have collaborated with.  They have taught me a lot about diverse fields, and many have become treasured friends.”

EicOsis, a Davis company that he founded, is working to move inhibitors of the soluble epoxide hydrolase into the clinic.  They have been funded by the National Institutes of Health (NIH) Program to move the inhibitors into human trials targeting chronic or neuropathic pain with a non-opiate analgesic.  In parallel. they are developing a drug to treat a commonly fatal pain condition in horses called laminitis as well as arthritic pain in dogs and cats.

Hammock's longtime collaborator, Dipak Panigrahy, a physician and assistant professor of pathology at Harvard Medical School and a researcher with Harvard's Center for Vascular Biology Research, praised his “incredible commitment to science and medicine with extraordinary outside-the-box reasoning.”

“His keen intellect and reasoning, ability to communicate complex ideas, and dedication to teaching the next generation of scientists is unparalleled,” Panigrahy said, adding “Bruce is kind, compassionate, inspiring and also a loving husband and father to three incredible kids.”

“In addition, Dr. Hammock's laboratory has demonstrated that epoxides of omega 3 or fish oil fatty acids are more potent than EETs in many assays, Panigrahy said. “Importantly, Dr, Hammock's studies are providing insight into the outcome of dramatically increasing omega 3 lipids in the U.S. diet."

Hammock, a member of the National Academy of Sciences and the National Academy of Inventors, has led a team of more than 40 scientists and students with what program manager Cindy McReynolds describes as “unprecedented research with a multidisciplinary, integrated approach to research focused on insect biology, mammalian enzymology, and analytical chemistry.” He has produced more than 1000 publications on a wide range of topics in entomology, biochemistry, analytical and environmental chemistry in high quality journals.  The laboratory has generated more than 80 patents.

The Hammock lab is the home of the UC Davis/National Institute of Environmental Health Sciences Superfund Research and Training Program.  Lab alumni total more than 65 graduates, who now hold positions of distinction in academia, industry and government. The list also includes more than 300 postdoctoral fellows.

The historical research funding base is diverse and includes long-term grants from NIH, National Science Foundation, U.S. Department of Agriculture, Department of Defense, UC Mosquito Research Program and many private and research foundation contracts and grants. 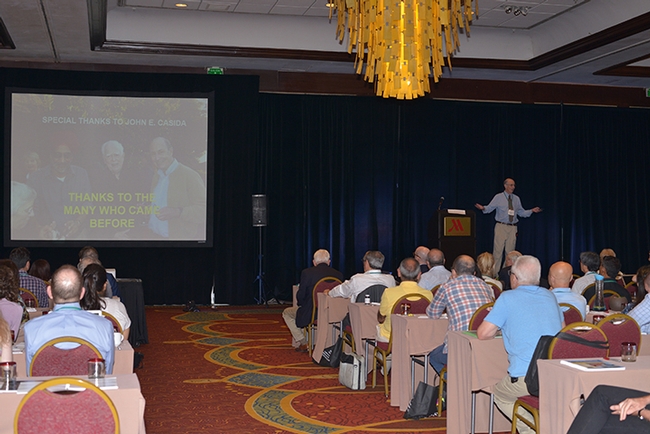 Distinguished professor Bruce Hammock of UC Davis delivering his plenary seminar on "Control of Acute and Neuropathic Pain by Inhibiting the Hydrolysis of Epoxy Fatty Acid Chemical Mediators: Path to the Clinic" at the Eicosanoid Research Foundation conference.(Photo by Caryn Volpe) 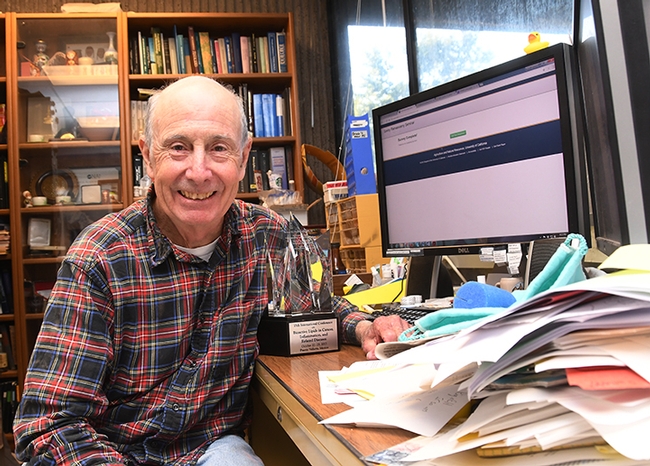