Bug Squad
sitenum=63
Happenings in the insect world
Take It From a Bee Guy: Honey Is Not 'Bee Vomit' Close-up of a returning foraging bee sharing nectar with her sisters. (Photo by Kathy Keatley Garvey)
Take it from the bee scientists. Honey is NOT vomit.

We asked noted honey bee guru Eric Mussen, Extension apiculturist emeritus at the University of California, Davis, whose career in bee education spans four decades, to settle the issue. Although he retired in 2014, he keeps active. Last year he completed a term--his sixth--as president of the Western Apicultural Society. He maintains an office in Briggs Hall.

And he continues to answer questions about bees and honey.

“As most people know, honey begins as a dilute sugar solution secreted by ‘nectaries,' sugar syrup-secreting glands which are located in flowers or in extra-floral nectaries,” Mussen explains. “Pollen is not a natural constituent of nectar.  The nectar is sucked up by honey bees and it passes into an expandable pouch called the ‘honey stomach.'  This is the pre-digestive part of the part of the digestive tract that honey bees use to bring water and nectar to the hive.  In honey bees and other insects, this ‘crop' precedes the portions of the digestive tract used for digesting food.  There is a unique valve between the crop and the ventriculus (midgut), called the ‘proventriculus,' that has rake-like projections that constantly pull particulates, like pollen grains, from the crop contents and push them along for digestion.” Honey bee guru Eric Mussen (Photo by Kathy Keatley Garvey)
“A nectar-foraging bee,” Mussen points out, “returns to the hive and pumps out the nectar to a receiving bee.  An enzyme is mixed with the crop contents that reduces sucrose (table sugar), a disaccharide normally found in nectar, into two monosaccharides (glucose and fructose) that are the principal sugars in ripened honey.  If the nectar is not immediately used as a water substitute or for diluting thick honey or solid pollen stores to allow swallowing, it is carried to the area in the hive where honey is being processed.  The nectar is passed to processing bees that blend the incoming nectar loads, mix them together, then pump out a bit of solution and hold a small sheet of the syrup in its partially distended mouthparts.  Water evaporates from the surface of the syrup.  The drier solution is drawn back into the crop and mixed with the other contents.”

“Then the film is again exposed to the air.  That process repeats itself until the moisture content of the syrup falls below 20 percent.  Evaporation is influenced significantly by the relative humidity.  Since honey will ferment at moisture contents above 20 percent, it is important to leave the honey with the bees until it can be immediately processed in locations with high humidity.  That honey will seem to be thin.  During the summer in California, the ambient relative humidity is quite low--15 percent or less.  In that case, honey produced in the Central Valley can have a moisture content of 13 to 13.5 percent.  That honey is quite thick.”

As an aside, “pollen grains are likely to be found in honey,” Mussen says. “Wind-blown pollens can fall into flowers that are open faced.  Pollen grains are collected by hairs on the bees' bodies.  They can get onto the mouthparts and become consumed with the nectar.  Nectar-processing bees may have eaten some pollen in the hive before processing the honey.  This is how the pollen grains get into honey.  They do not necessarily get consumed with the fresh nectar.  Physical contaminants of honey have to be quite small, like pollen grains, since the bees ingest all their food by drinking it through a straw-like proboscis with a very small opening at the tip.  Most of the physical contaminants are removed by the proventriculus.”

And here's the point: “Since honey never is mixed with digesting food in the intestinal tract, it is inaccurate to refer to honey as ‘bee vomit.'  A dictionary definition of vomit includes ‘disgorging the stomach contents through the mouth.'  Since a human does not have a crop, the stomach is in direct contact with the esophagus and mouth.  In a bee, the proventriculus and crop are in direct contact with the mouth.  The digestion of solid foods in bees begins in the ventriculus and there is no way that a honey bee can bring that food back through the proventriculus, or ‘vomit.'

We can. Mark your calendar to attend these two events: the  second annual California Honey Festival on May 5 in downtown Woodland (it's held in partnership with the UC Davis Honey and Pollination Center) and the fourth annual UC Davis Bee Symposium: Keeping Bees Healthy (hosted by the Honey and Pollination Center and the UC Davis Department of Entomology and Nematology) on March 3 in the UC Davis Conference Center. The Bee Symposium will feature keynote speaker Thomas Seeley, the Horace White Professor in Biology at Cornell University, New York.

The schedule and links to the capsule information: 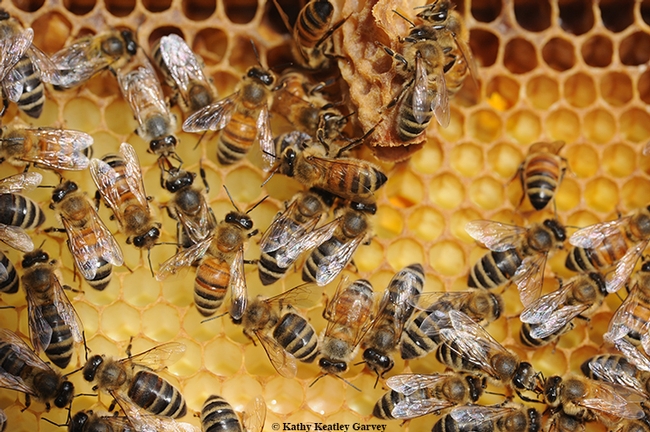 Foraging honey bees return to the hive to share nectar, which the house bees will turn into honey. (Photo by Kathy Keatley Garvey) 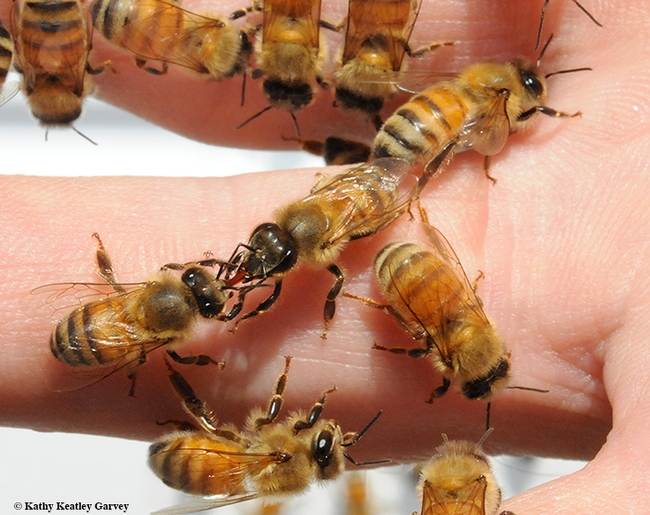