UC Davis Entomology Club president Chloe Shott and Lohitashwa “Lohit” Garikipati, club secretary, hold praying mantises from the Garikipati collection. (Photo by Kathy Keatley Garvey)
It's about value. It's about respect. It should not be about fear.

UC Davis entomology major Lohitashwa “Lohit” Garikipati, who will be displaying his praying mantis collection at the Bohart Museum of Entomology during the seventh annual UC Davis Biodiversity Museum Day on Saturday, Feb. 17, is keenly interested in sharing information about insects.

“Every organism on the Earth has value, and we should respect that,” says Garikipati, a third-year entomology student who rears praying mantises. “Regardless of its appearance, its lifestyle, or its behaviors, all the life that we see here on Earth is the result of change billions of years in the making. There's nothing that is scary, or disgusting; fear is taught, and the sooner we stop fearing and start appreciating, the sooner we can save as much biodiversity on the Earth as we can. It only takes one second to decide you care enough to stop fearing, so why not start now?”

“What I like most about mantids, besides their amazing appearance, is how charismatic they are compared to other insects,” says Lohit. “Their behavior varies between species, but all have this awareness that most other insects lack, which make them fun to interact with and study. Their predatory behavior is also interesting.”

Garikipati, a native of Pleasanton, Calif., says he's been interested in praying mantises since elementary school. “I started rearing native species in the 5th grade,” he recalled. “I kept a Mantis religiosa (European mantis) and hatched the ooths she laid. Since then I've had in my collection over a dozen species throughout that time. There wasn't any one species that I ended up consistently rearing, as I would get nymphs, rear them ‘til I got a second generation, then trade or sell them to get a new species. I will definitely be keeping orchids as long as I can though!”

Currently in his collection: An orchid praying mantis looks around. (Photo by Kathy Keatley Garvey)
Why should people like praying mantises? “For a group of insects that's very widely known, there unfortunately is not much scientific work done on them,” says Garikipati. “They've been mostly neglected which is pretty sad to see for such gorgeous insects. From a non-scientific standpoint, mantises can be incredibly interesting to observe, due to their awareness, and their generally curious nature. I've definitely had individuals reared from the hatchling stage that get so comfortable with you they'll just lay in your hand, which is crazy to think that an insect would do such a thing. They have quite the personality! One thing that is rather unfortunate is that the media likes to play up the mantis eating hummingbird brains angle, to get attention, and unfortunately that has given the mantis a negative stigma. While they do eat hummingbirds and many other small vertebrates, the number is astoundingly low compared to the number of animals humans, or even pet cats kill every year. They're generalist predators, meaning they'll eat anything they can catch.”

Lohit traces his interest in all insects to early childhood. “I've had an innate interest in animals in general as long as I can remember, insects just happened to be the most fun and most easy to find and study! The thing that fascinates me most about insects is their massive diversity and the ability insects have to surprise us by breaking what we think an animal can do. For example, wasps photosynthesizing.”

He is interested in enrolling in graduate school, “possibly in Davis--I'm not quite sure yet. Currently, my career plans involve doing research on mantis ecology, as well as updating taxonomy. Many genera need a lot of work and updated descriptions for the species they contain. I would like to be a professor as well!”

When he's not working with insects, Lohit enjoys “playing guitar, going to the gym, or trying to climb the mountain of homework or studying I have!”

Meanwhile, visitors can see learn all about praying mantises--and hold and photograph them--from 9 a.m. to 1 p.m., Feb. 17 at the Bohart Museum, located in Room 1124 of the Academic Surge Building, Crocker Lane. The Bohart, directed by entomology professor Lynn Kimsey, is the home of a global collection of nearly 8 million insect specimens, and a live "petting zoo," comprised of Madagascar hissing cockroaches, stick insects and tarantulas.  Also on Feb. 17, highlights at the Bohart Museum will include the 500,000-specimen butterfly/moth collection, curated by entomologist Jeff Smith; and an insect collection display by Smith and fellow Bohart Museum associates Fran Keller and Dave Wyatt from their latest expedition to Belize. "You'll be able to see the tremendous diversity of butterflies, moths and mantids, and talk to the scientists who have just returned from there," said Tabatha Yang, education and outreach coordinator.  "There will be orchids and orchid bees connecting the Bohart Museum's work with plant biology and science."

The Bohart Museum is one of the 13 museums or collections on campus where visitors can explore “the diversity of life” on Biodiversity Museum Day.  All are within walking distance on campus except for the Häagen-Dazs Honey Bee Haven on Bee Biology Road and the Raptor Center on Old Davis Road. Set from 9 a.m. to 4 p.m., the event is free and open to the public. Parking is also free. Times will vary from 9 a.m. to 1 p.m., and from noon to 4 p.m.. 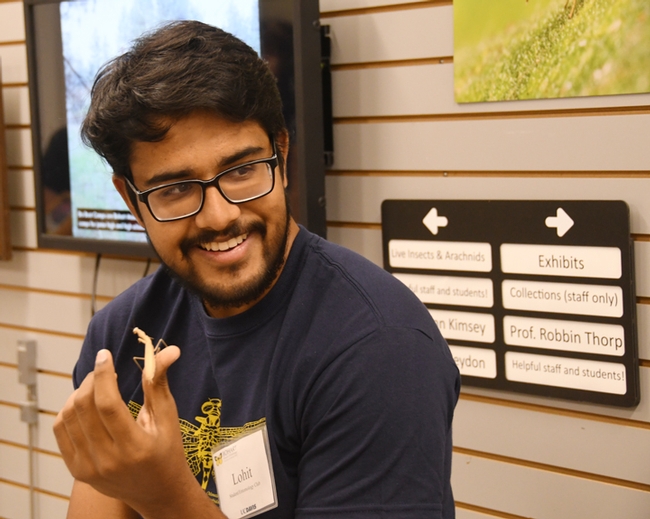 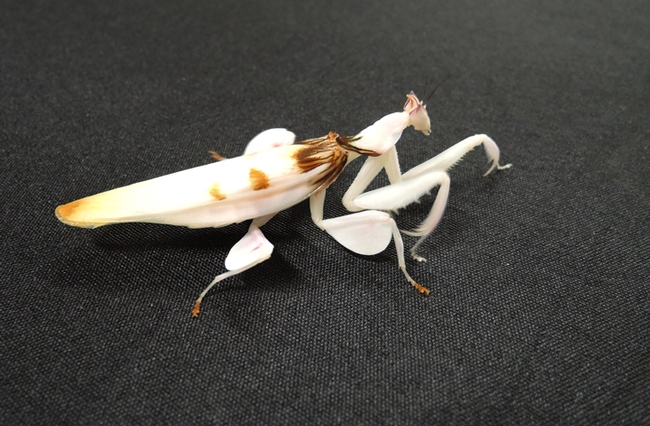 This is a close-up of an orchid mantis, Hymenopus coronatus, on the move. It is part of the collection of UC Davis entomology student Lohitashwa “Lohit” Garikipati, secretary of the UC Davis Entomology Club. (Photo by Kathy Keatley Garvey) 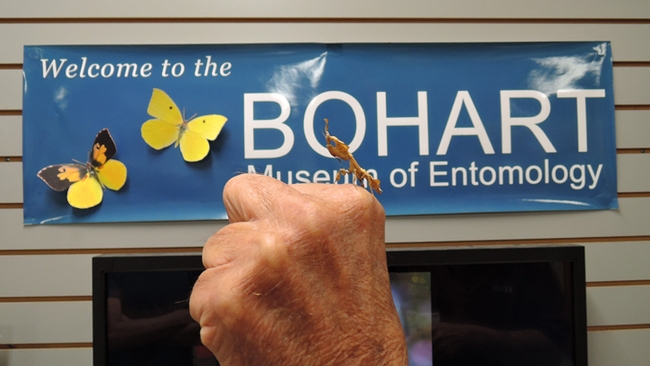