For size comparison, Lynn Kimsey, director of the Bohart Museum, points at the stick insect molting. (Photo by Kathy Keatley Garvey)
Well, it did what it was supposed to do.

A stick insect, aka walking stick.

An escapee from the Bohart's live "petting zoo."

And it was doing what stick insects (Phasmatodea) do--it was molting.

“It should be finished by now,” Kimsey said, periodically keeping an eye on its progress.

"Twiggy" is now back in the petting zoo, awaiting the arrival of visitors to the Bohart Museum during the seventh annual UC Davis Biodiversity Museum Day from 9 a.m. to 4 p.m. on Saturday, Feb. 17, when the public can explore the diversity of life at 13 museums and/or collections. For free. Times will vary from 9 a.m. to 1 p.m. or from noon to 4 p.m. The Bohart, located in Room 1124 of the Academic Surge Building on Crocker Lane and the home of nearly eight million insect specimens, will be open from 9 a.m. to 1 p.m. (See more information on Biodiversity Day.)

Like all insects, stick insects have a head, thorax and abdomen and six legs. Their elongated bodies mimic a stick or straw. These "bug sticks" don't move fast (is that why they're calling "walking sticks" instead of "running sticks?"), but what a perfect camouflage from predators!

Entomologists tell us that before reaching the adult stage, a stick insect may shed its skin six to nine times, depending on the species and the gender. Its outer skeleton (skin) prevents it from growing so it sheds its skin to do so.

Stick insects are a favorite at the Bohart Museum petting zoo, which also includes Madagascar hissing cockroaches, praying mantises, and tarantulas. Visitors love to hold the sticks and photograph them. They can also purchase stick insect T-shirts in the Bohart Museum's year-around gift shop.

Ever see a stick insect molting? Here's a You Tube channel that depicts the process perfectly. You can also learn about them in this Fascinating Facts About Stick Insects.

A few facts from Wikipedia: 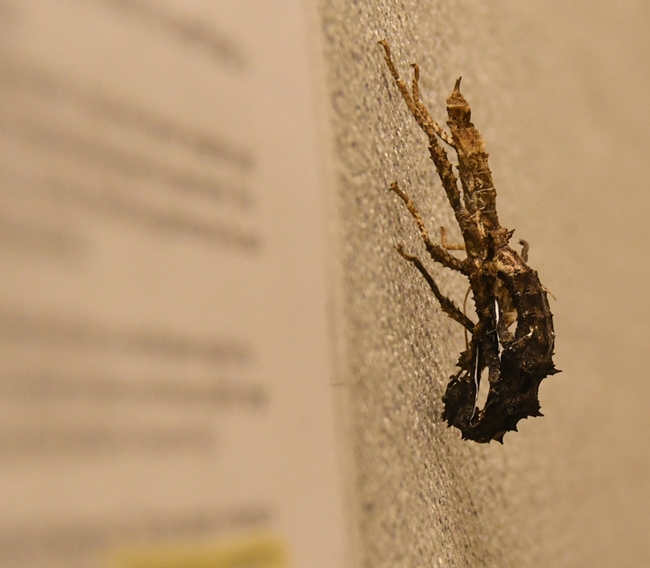 A stick insect in the process of molting. (Photo by Kathy Keatley Garvey) 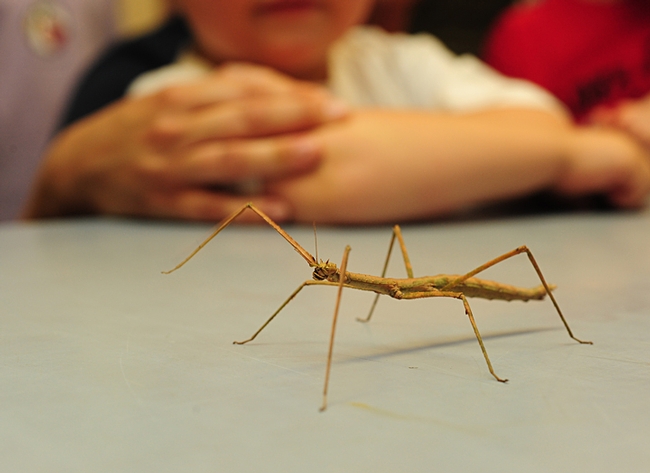 A stick insect, or walking stick, makes the rounds at the Bohart Museum of Entomology. (Photo by Kathy Keatley Garvey) 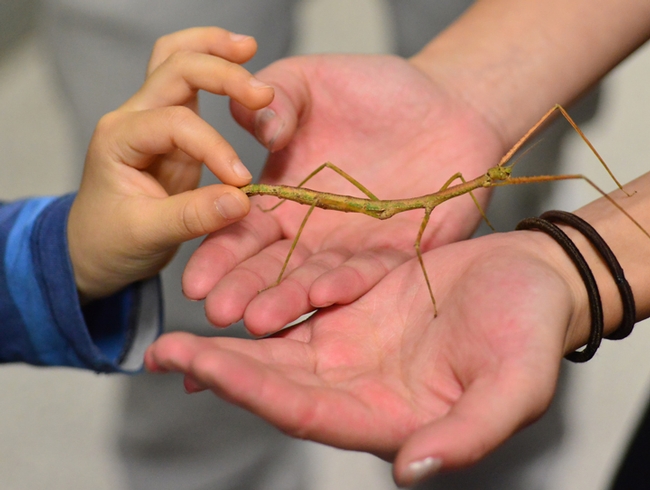