Doctoral candidate and ant specialist Brendon Boudinot of the Phil Ward lab won the EGSA contest with his REPRESANT design, with illustrations by colleague Eli Sarnat, an alumnus of the Ward lab.

Doctoral candidate and nematologist Corwin Parker of the Steve Nadler lab won the Picnic Day design with his illustration of a bee barbecuing.

And an ant design for a onesie, “My Sister Loves Me,” by doctoral student and ant specialist Jill Oberski of the Ward lab rounds out the winners' circle.

Boudinot, a fourth-year doctoral student and president of EGSA, said the ant featured on his design “is a minor worker of the Drogon ant and described recently by our post-doc Eli Sarnat." Sarnat, who received his doctorate in entomology from UC Davis in 2009, is now a post-doctorate researcher in the Okinawa Instituite of Science and Technology in the Economo lab. The ant in Boudinot's design is based on Sarnat's work, published in AntWiki and in The Guardian. Corwin Parker's design, BarBeeCue," depicting a bee barbecuing, is the Picnic Day winner in the EGSA contest.
Parker, a sixth-year doctoral candidate, says the story behind his design is that “I had the visual pun ‘BarBeeCue' stuck in my head for ages and this seemed like a good opportunity to exercise it. For the species, it was just sort of a generalized Apidae, mostly modeled after the honey bee, but with a thorax perhaps slightly fluffier. I hope the bee scientists don't mind.” "My Sister Loves Me" is an ant motif by Jill Oberski.
Oberski, a first-year doctoral student, says her design was “the result of all the people who stopped by our t-shirt booth at the Entomological Society of America meeting (in Denver), asking if we had more onesie designs. “It is a little specific, but I'm a big sister myself, and I figured other entomologists would find it pretty cute.”

Oberski's adult ant is “loosely based on Ochetellus, a mostly-Australian genus.” After admiring an image taken by Alex Wild, also a Phil Ward lab alumnus (doctorate in entomology in 2005) and “I went from there.” Wild, a renowned macro photographer, is the curator of Entomology at the University of Texas/Austin.

The winning T-shirts and other previous winners can be ordered online at https://mkt.com/UCDavisEntGrad/ and also will be available at Briggs Hall on April 21 at the annual UC Davis Picnic Day and future Picnic Days. Doctoral student and medical entomologist Olivia Winokur of the Chris Barker lab, serves as treasurer of EGSA and t-shirt sales coordinator. She may be reached for more information at ocwinokur@ucdavis.edu.

The EGSA is comprised of UC Davis graduate students who study insect systems. Its objectives are to connect students from across disciplines, inform students of and provide opportunities for academic success, and to serve as a bridge between the students and administration.  The officers, in addition to Brendon Boudinot, are Emily Bick of the Christian Nansen lab, vice president; Maureen Page of the Neal Williams lab, secretary; Olivia Winokur of the Chris Barker lab, treasurer; and two Graduate Student Association representatives, Charlotte Herbert of the Bohart Museum of Entomology and Nick Booster of the Jay Rosenheim lab. 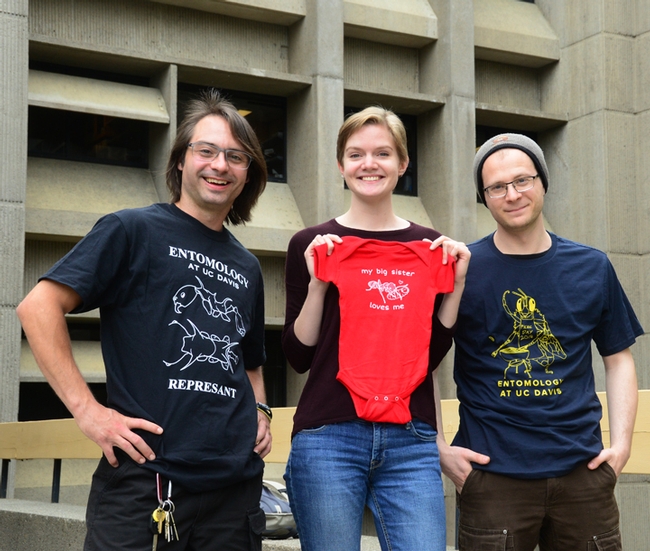