A monarch will soon eclose from this transparent chrysalis. (Photo by Kathy Keatley Garvey)
Have you ever seen a monarch butterfly eclose?

It's a magical moment.

First an egg, then a caterpillar, then a chrysalis, and then a butterfly, Danaus plexippus.

We took some images of a monarch eclosing back on Sept. 10, 2016. It was late in the season. While other monarchs were migrating to coastal California, some were fluttering into our yard in Vacaville, Calif., nectaring on blossoms, mating, and laying eggs on milkweed, their host plant.

The caterpillar, from the first instar to the fifth instar, munches the milkweed like there's no tomorrow (maybe there isn't?), and then forms an emerald green chrysalis, dotted with gold that's reminiscent of royalty. When it turns transparent, you can see the familiar black and orange wings, a promise of what's to come.

It takes about two weeks for an adult butterfly to emerge from its chrysalis and then it slides out--swoosh!--and hangs upside down, pumping fluids into its expanding wings. When the wings dry, off it goes. Sometimes it soars high into the sky. Sometimes it just lingers.

If you're a butterfly aficionado, you never get tired of watching that magical moment when a monarch ecloses.

Here's to Independence Day and to America's favorite butterfly, the monarch. 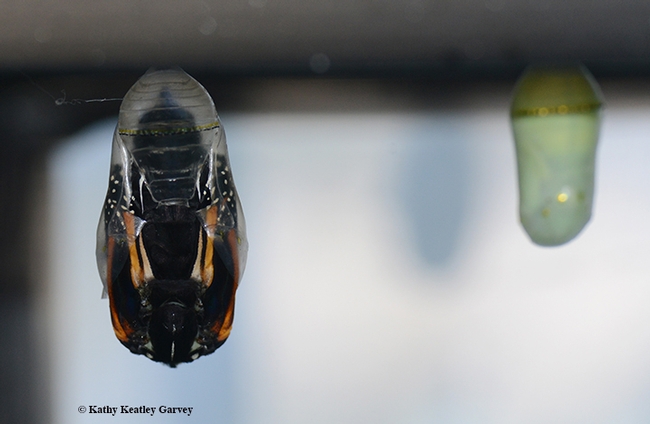 The monarch chrysalis bulges, a sure sign that eclosure is imminent. At right is a newly formed green chrysalis. (Photo by Kathy Keatley Garvey) 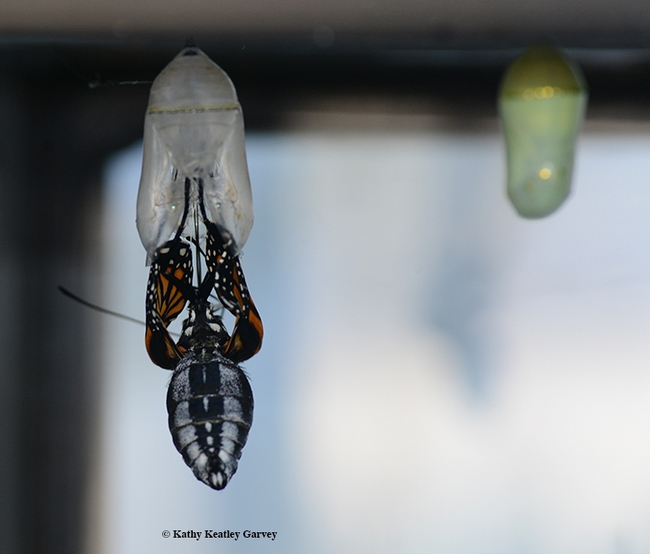 Out it slides. Swoosh! (Photo by Kathy Keatley Garvey) 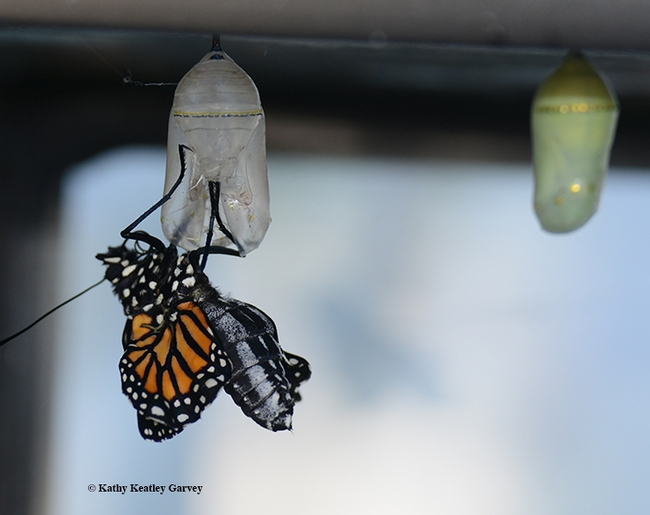 Time to wiggle around. Welcome to the world! (Photo by Kathy Keatley Garvey) 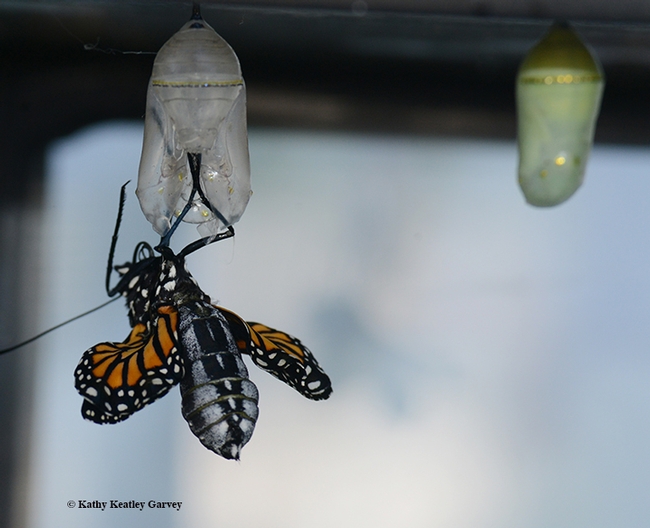 Time to pump up the wings. (Photo by Kathy Keatley Garvey) 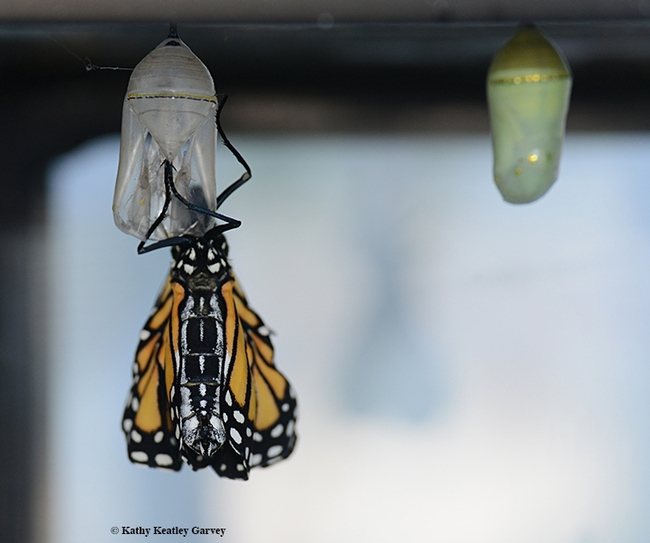 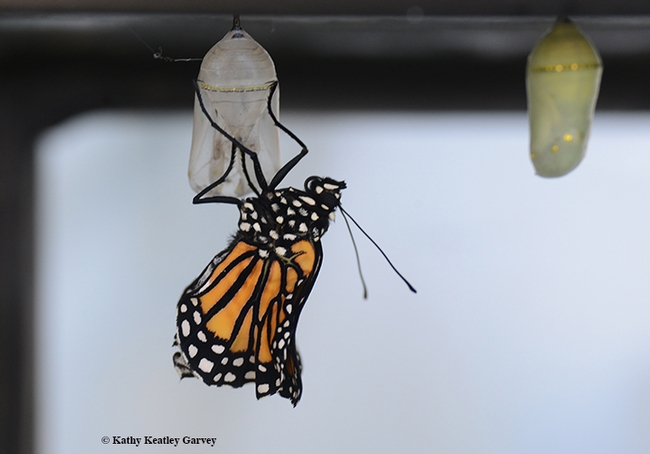 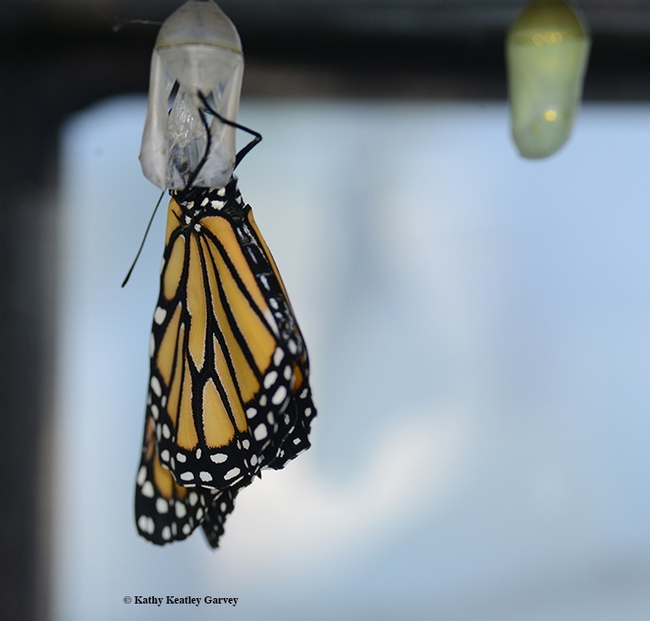 Ah, as soon as I dry, I'll be off and long gone. (Photo by Kathy Keatley Garvey)
Focus Areas:
Focus Area Tags: Innovation, Natural Resources
Tags: caterpillar (14), chrysalis (16), Danaus plexippus (40), eclosure (4), egg (9), Independence Day (3), monarch butterfly (24)
Comments: 3
Comments:
by diane calder
on July 4, 2018 at 3:23 PM
Great photos. Lots of monarchs in New Zealand and Australia which don't migrate. Enjoy your celebrations today. From north of Sydney.
by Fay
on July 5, 2018 at 4:58 AM
A monarch was finally visiting my garden just the other day, and I was elated. And I agree... There is nothing better than watching the process from egg, to caterpillar, to butterfly. Love your photos!
by Win L Rogers
on July 5, 2018 at 8:42 AM
It's true, I never tire of it.
Leave a Reply: