Bug Squad
sitenum=63
Happenings in the insect world
What a Night for Moths and Spectators! Entomologist Fran Keller, an assistant professor at Folsom Lake College, checks out a Polyphylla sp. or lined June beetle, the first insect drawn to the blacklights. She received her doctorate from UC Davis, studying with Lynn Kimsey, who directs the Bohart Museum of Entomology. (Photo by Kathy Keatley Garvey)
What a night!

What a night--both inside and outside the Bohart Museum of Entomology at the University of California, Davis on Saturday, July 21.

While moths and other insects fluttered to the blacklighting display,  visitors flocked inside the museum to see the specimens, and engage one-on-one with scientists.

The UC Davis event was the first in a series of summer weekend programs. In fact, "Moth Night" is the only Bohart Museum public event held at night; it takes place annually in conjunction with National Moth Week, a celebration of the beauty, life cycles and habitats of moths. (See yesterday's Bug Squad blog on blacklighting and the moth families recorded by "Moth Man" John DeBenedictis.)

Inside the Bohart Museum last Saturday, retired entomologist Norm Smith, who received his doctorate at UC Davis studying with major professor Richard Bohart (for whom the museum is named) fielded questions about moths and field collecting, as did senior museum scientist Steve Heydon, and Bohart Museum associates Jeff Smith (who curates the butterfly and moth section) of Rocklin; Greg Kareofelas of Davis, naturalist and insect photographer; entomologist Fran Keller, assistant professor at Folsom Lake College (she holds a doctorate in entomology from UC Davis)  and entomologist and college student Noah Crockette of Sacramento. The colorful family craft activity: moth and butterfly replicas on wax candles. (Photo by Kathy Keatley Garvey)
Crockette, a 2017 graduate of The Met Sacramento High School and a soon-to-be student at Cornell University, Ithaca, N.Y, staffed the Bohart's live "petting zoo," which houses Madagascar hissing cockroaches, walking sticks, tarantulas and praying mantids. He invited young and old, the curious and the apprehensive, to acquaint themselves with the arthropods.

Among the specimen attractions was the white witch moth (Thysania agrippina), which at 11 inches, holds the record for largest wingspan in insects. The caterpillar of this moth can reach 7 inches long. The species is found in Mexico and Central and South America.

Moths are among the most diverse and successful organisms on earth. Scientists estimate there are 150,000 to more than 500,000 moth species. Most are nocturnal.

Meanwhile, Bohart officials are gearing up for the two remaining summer programs, which are free, open to the public, and family friendly:

The Bohart Museum is located in held Room 1124 of the Academic Surge Building, Crocker Lane. Directed by Lynn Kimsey, professor of entomology at UC Davis,  the museum houses a global collection of nearly eight million specimens. It is also the home of the seventh largest insect collection in North America, and the California Insect Survey, a storehouse of the insect biodiversity.  In addition to the petting zoo, the museum features a year-around gift shop, which is stocked with T-shirts, sweatshirts, books, jewelry, posters, insect-collecting equipment and insect-themed candy. 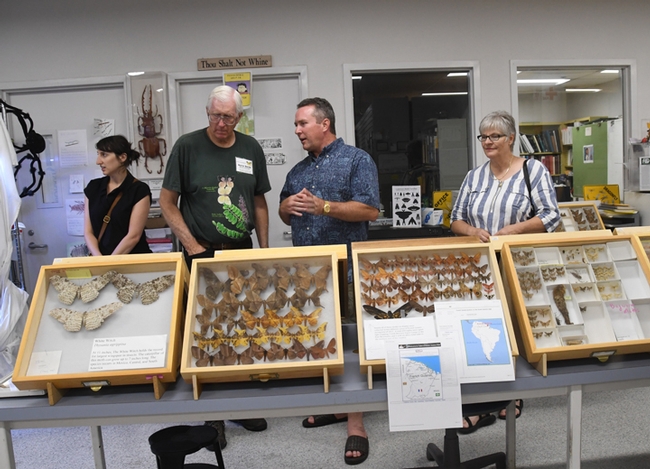 Retired entomologist and UC Davis alumnus Norm Smith (second from left) talks to visitors at the Bohart Museum of Entomology's "Moth Night." The white witch (see display on the far left) is the largest moth in the world. (Photo by Kathy Keatley Garvey) 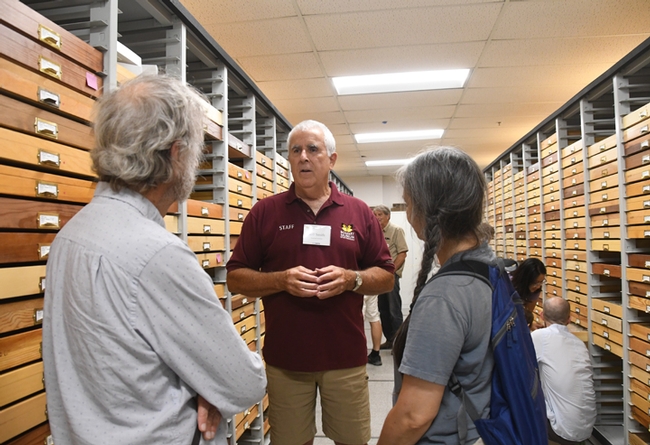 Jeff Smith, curator of the Bohart Museum's butterfly and moth section, talks about the specimens. (Photo by Kathy Keatley Garvey) 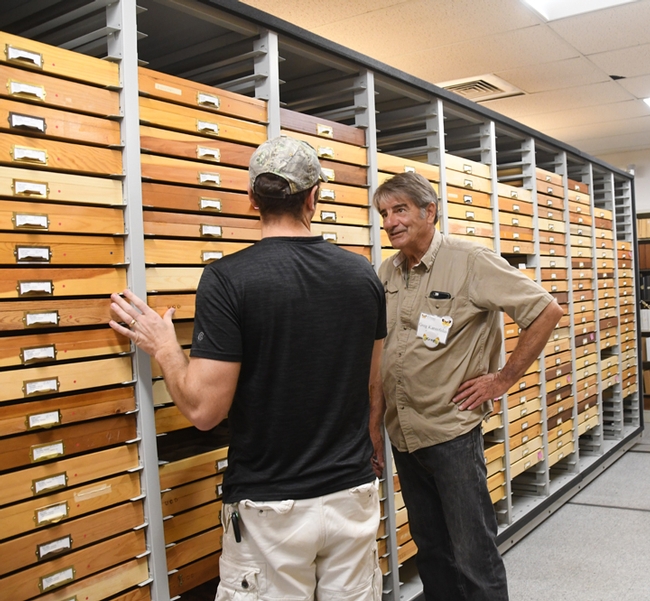 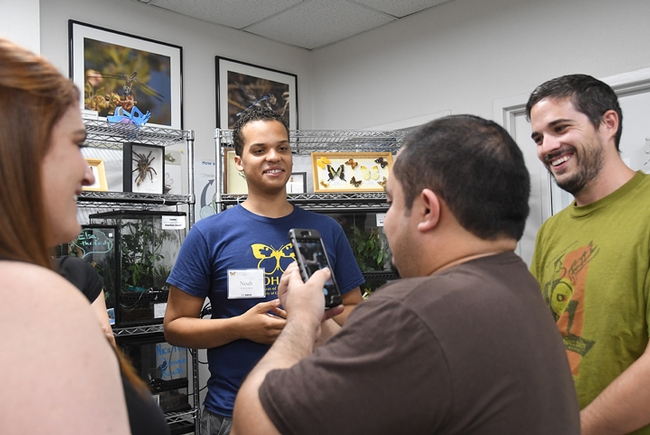 Entomologist and Bohart associate Noah Crockette talks about the critters in the live "petting zoo." He will enter Cornell University this fall, majoring in entomology. (Photo by Kathy Keatley Garvey) 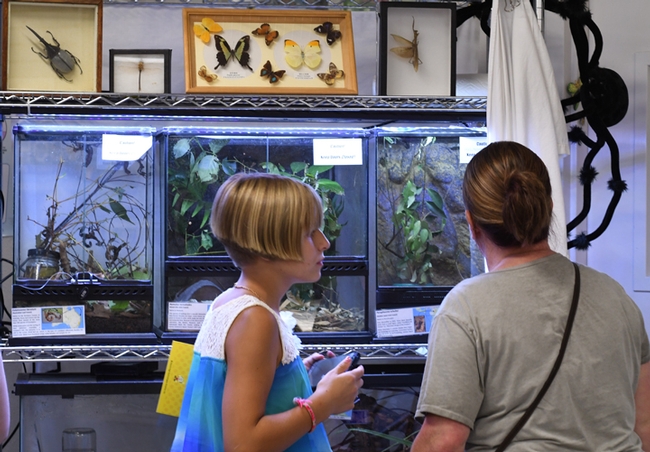 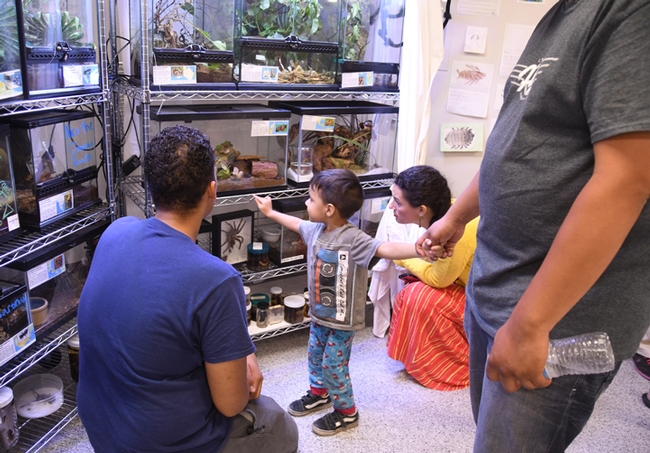 Entomologist Noah Crockette encourages visitors of all ages to check out the live petting zoo. (Photo by Kathy Keatley Garvey) 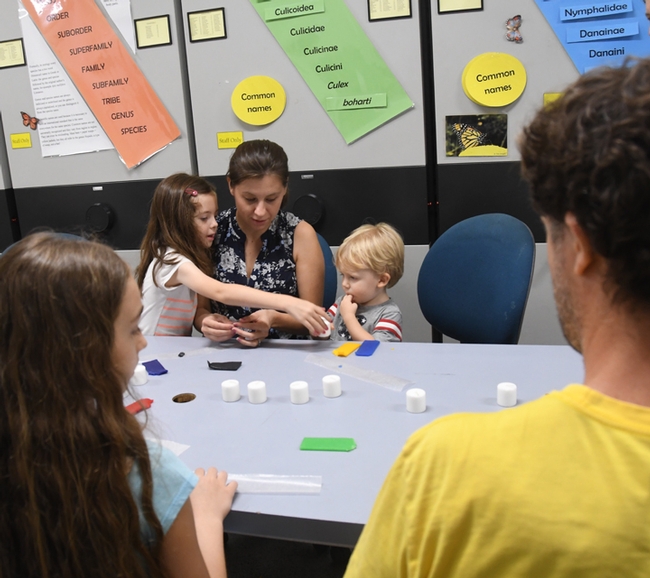