Bug Squad
sitenum=63
Happenings in the insect world
What's Not to Love About 'Boys' Night Out'? Robbin Thorp, distinguished emeritus professor of entomology at UC Davis. (Photo by Kathy Keatley Garvey)
We look forward to "The Boys' Night Out."

No. "Boys' Night Out" is when the longhorned male bees in our pollinator garden in Vacaville engage in sleepovers on our Mexican sunflowers (Tithonia) and other blossoms.

At night, the girls sleep inside their nests, and the boys cluster on flowers.

Lately, we've been admiring a trio of boys--Melissodes (possibly M. robustior, as identified by Robbin Thorp, distinguished emeritus professor of entomology at the University of California, Davis)--bunking down on a Tithonia. Every day, around sunset, they head over to the same flower, arrange themselves in comfortable sleeping positions (hey, quit kicking me), and it's nighty-night! When the sun rises, they vacate the bedroom. Sometimes it's earlier than planned, no thanks to buzzing bumble bees, carpenter bees and honey bees foraging around them and disturbing their beauty sleep. The nerve!

Thorp,  who holds a doctorate in entomology from UC Berkeley and taught entomology at UC Davis from 1964 to 1994,  continues to "bee involved" in research, writings, bee identification and public outreach. He teaches annually at The Bee Course (American Museum of Natural History), at the Southwestern Research Station, Portal, Ariz. The nine-day intensive  course is offered for conservation biologists, pollination ecologists and other biologists who want to gain greater knowledge of the systematics and biology of bees.

In a previous Bug Squad blog, Thorp responded to a reader's inquiry about "stings" from the clustering bees. "Boy bees cannot sting," he pointed out. "They lack a stinger which is a modified ovipositor in their wasp ancestors.  Occasionally a girl bee may spend the night out if she is caught by sudden drop in temperature.  Usually she will not be part of a group sleep over.  So don't attempt to handle unless you are confident you can tell boy bees from girl bees or they are too sleepy to defend themselves."

"Boy sleeping aggregations are based on a suitable perch and not related to where females are nesting, but probably no more than 100 yards from the nearest female nest," Thorp answered.  "Females nest in the ground and have rather distinctive round holes about the diameter of a pencil or slightly smaller, sometimes with small piles of dirt around them looking like mini-volcanos.  The holes may be widely separated or clustered together depending on the species, but each female digs her own burrow."

Said Thorp: "The boys usually settle in as the light dims in the evening.  Cool, and drizzly conditions may modify bed time. Each establishes his own spot, so there may be some jostling for position initially."

Longhorned bees are among the more than 1600 species of undomesticated bees that reside in California. In their book, California Bees and Blooms, the authors focus on 22 of the most common genera and the flowers they frequent. Meanwhile, check out Frankie's UC Berkeley Urban Bee Lab website to read more about native bees and the exciting research underway. 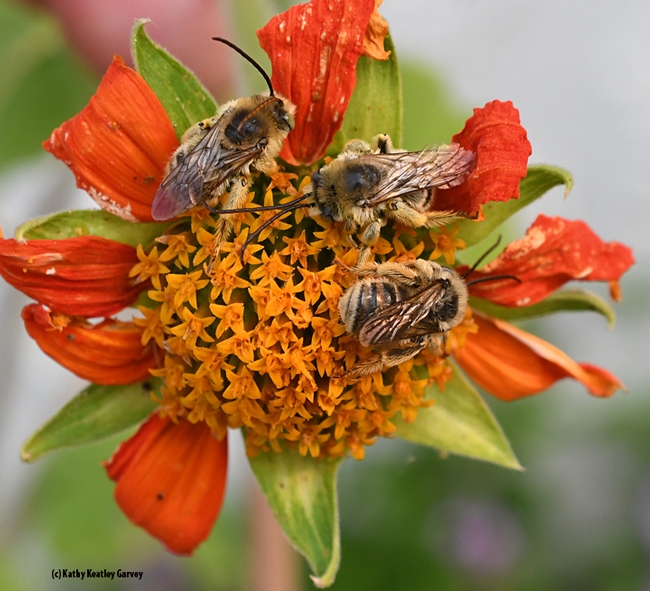 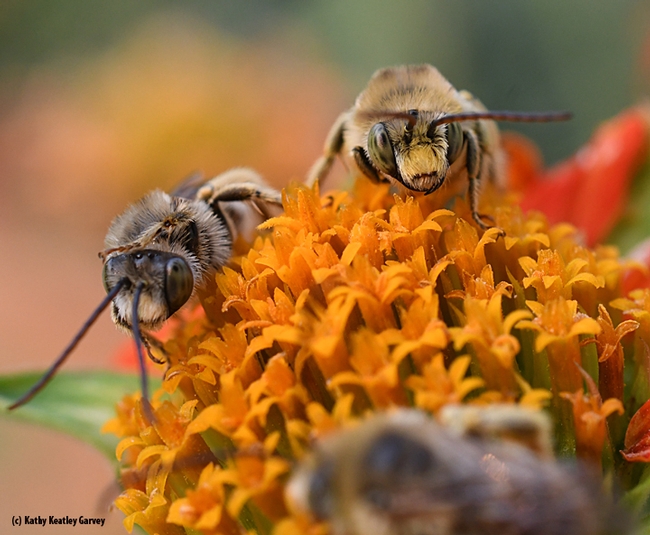 Is it time to wake up? Two male longhorned bees eye the photographer. (Photo by Kathy Keatley Garvey) 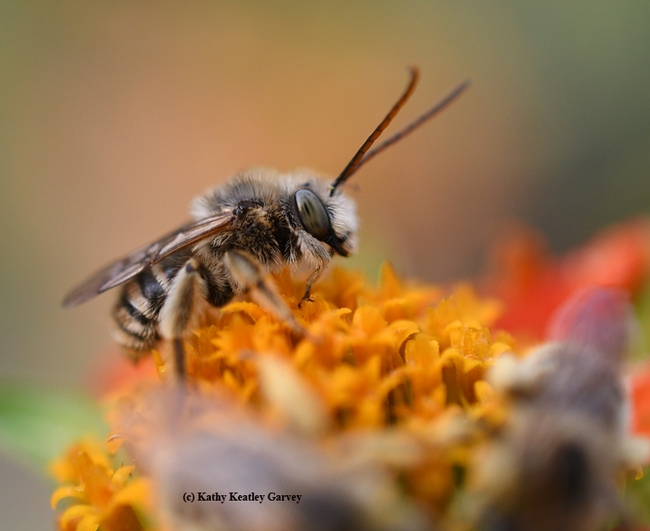 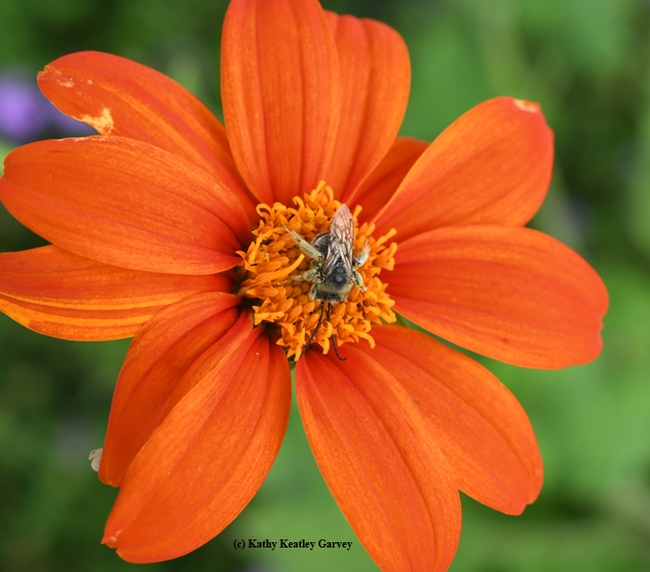