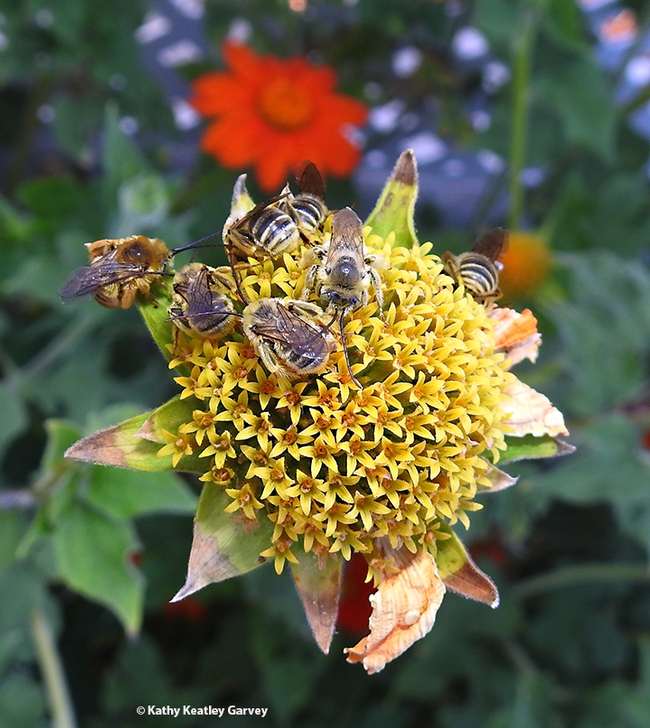 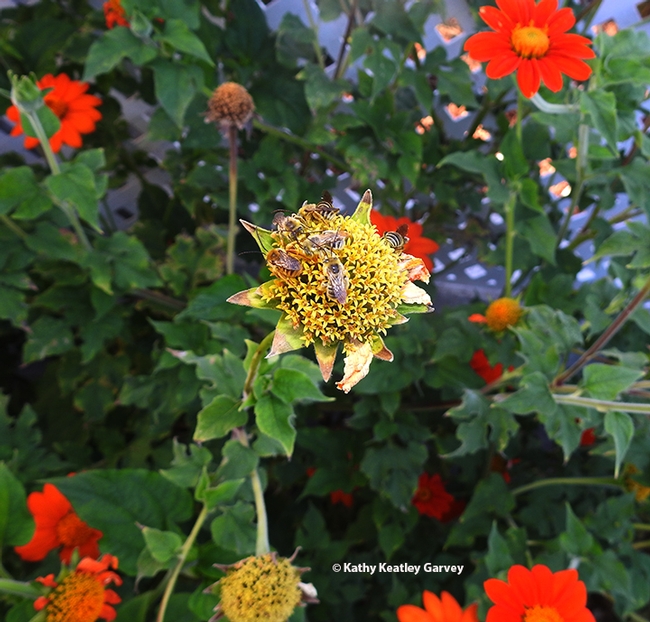 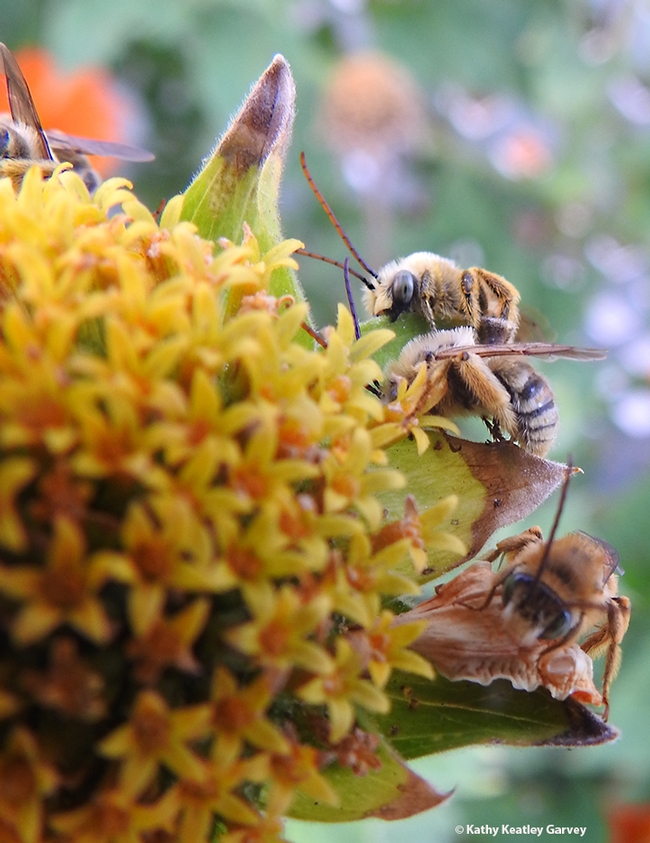 Have you ever seen a bumble bee sleeping?

If you slip out to your garden at night or early morning, you might find the male bumble bees asleep in, on or around the flowers.

The yellow-faced bumble bee, Bombus vosnesenskii, frequents our pollinator garden in Vacaville, Calif. By day, the bumble bees nectar on African blue basil, Mexican sunflower, lavender, salvia, foxgloves, catmint, honeysuckle, milkweed, California golden poppies and the like. Then at night, when the females return to their nests, the males find a cozy place to sleep.

They may cushion their heads on a Mexican sunflower (Tithonia) or straddle a lavender (Lavendula), holding on with their legs or mandibles.

Oftentimes they'll sleep safely and securely inside a flower that closes at night, such as a California poppy or a torch cactus.

Our Bombus residents seem to prefer the Mexican sunflowers and lavender.

Bee Books
Interested in bumble bees? Be sure to read the landmark  book, California Bees and Blooms: A Guide for Gardeners and Naturalists (Heyday Press). the work of UC-affiliated authors Gordon Frankie, (the late) Robbin Thorp, Rollin E. Coville, and Barbara Ertte. 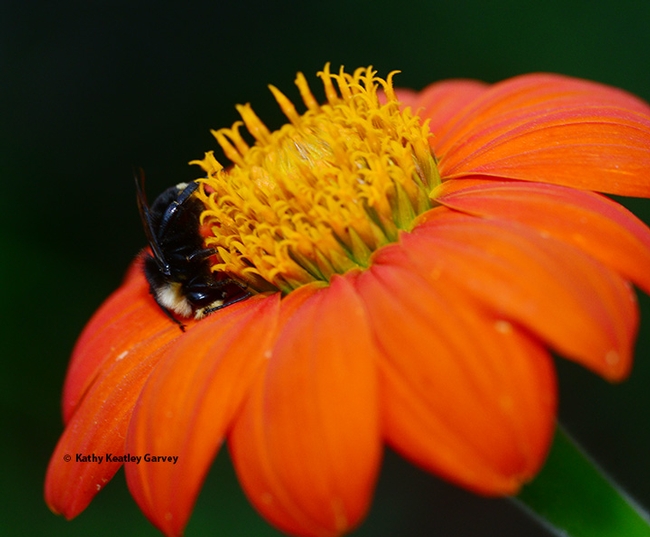 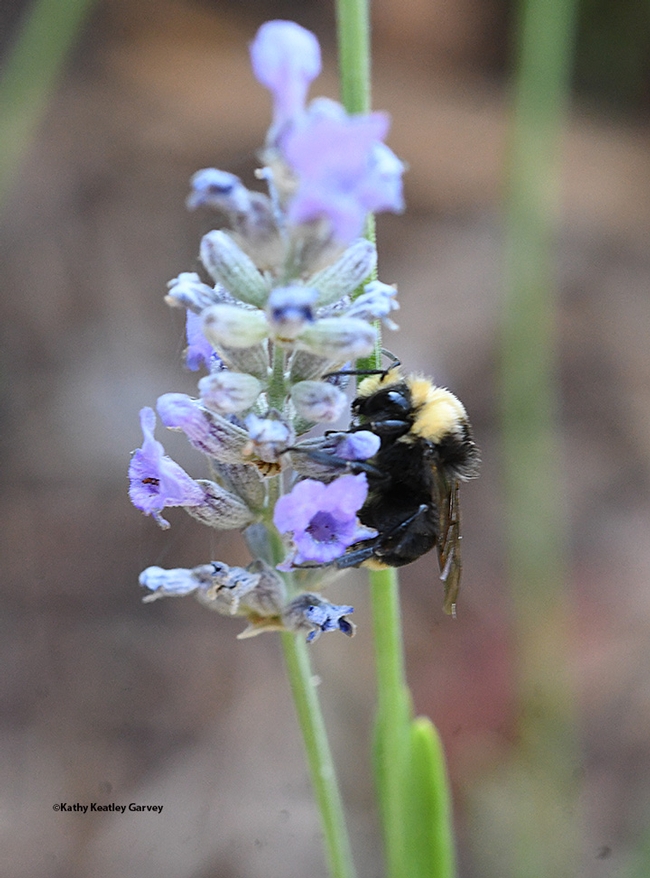 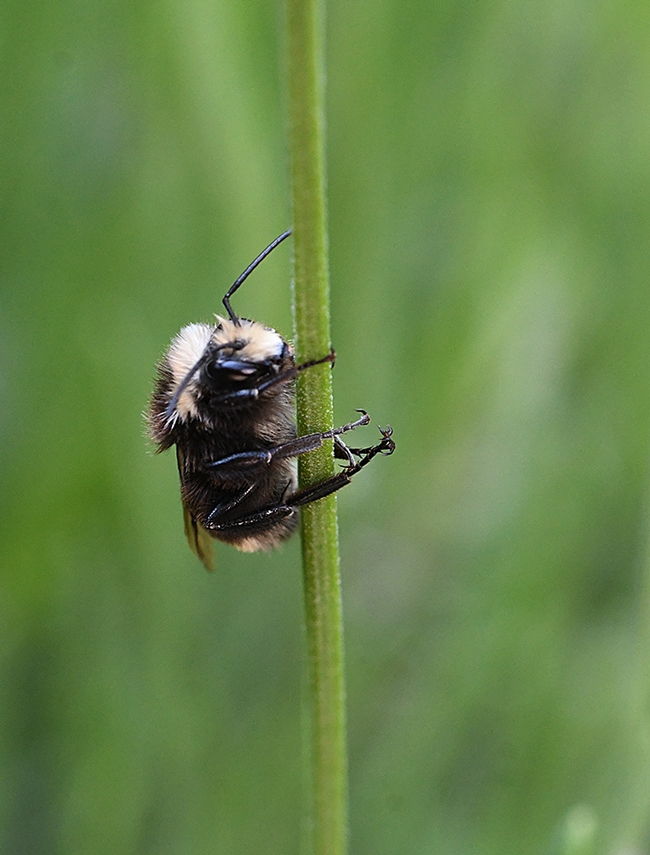 When Dolly Parton penned her song, "Love Is Like a Butterfly," she probably wasn't thinking of passion butterflies, Gulf Fritillaries.

And when she sings that popular song, neither she nor her audience are thinking of Gulf Fritillaries (Agraulis vanillae), getting together on a Mexican sunflower, Tithonia rotundifolia.

But Lepidopterists, entomologists, horticulturists and insect photographers are.

It's autumn, approaching Halloween, and the Gulf Fritillaries are doing what comes naturally on their host plant, the passionflower vine. But sometimes you'll find them on the fence line, on the ground, or on a neighboring flower.

Then you make a beeline for your camera. It's insect wedding photography. The bride and the groom and the photographer. The sun is shining, the birds are singing, the flowers are producing nectar, the bees are buzzing, the crickets are chirping, and all's right with the world.

Love is indeed like a butterfly, "a rare and gentle thing." 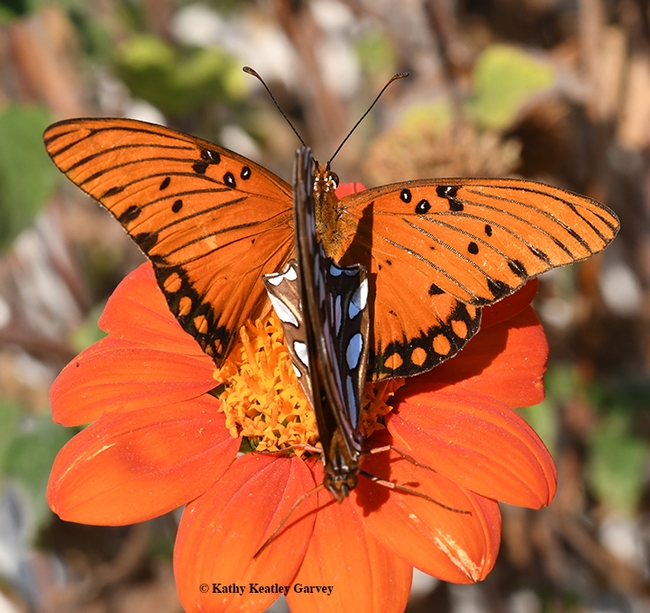 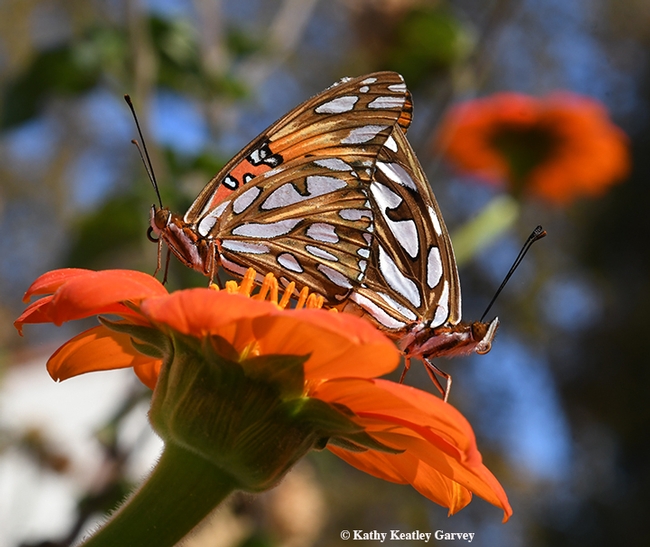 The Gulf Fritillaries become one, or as the Bohart Museum of Entomology scientists hear often, "this is a two-headed butterfly." (Photo by Kathy Keatley Garvey) 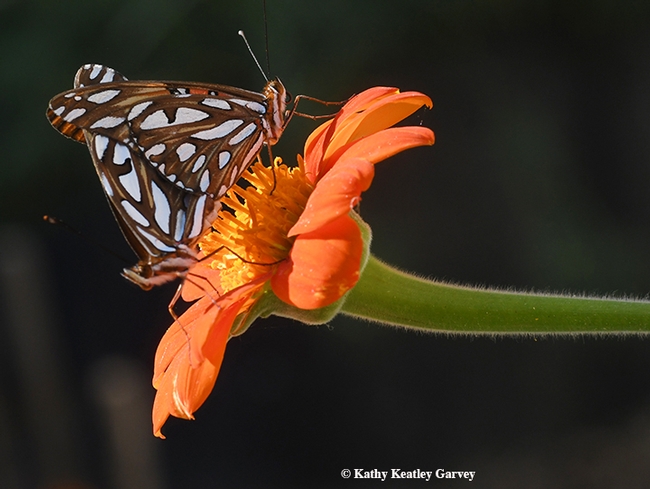 Gulf Fritillaries on a Tithonia--ignorning the photographer. (Photo by Kathy Keatley Garvey) 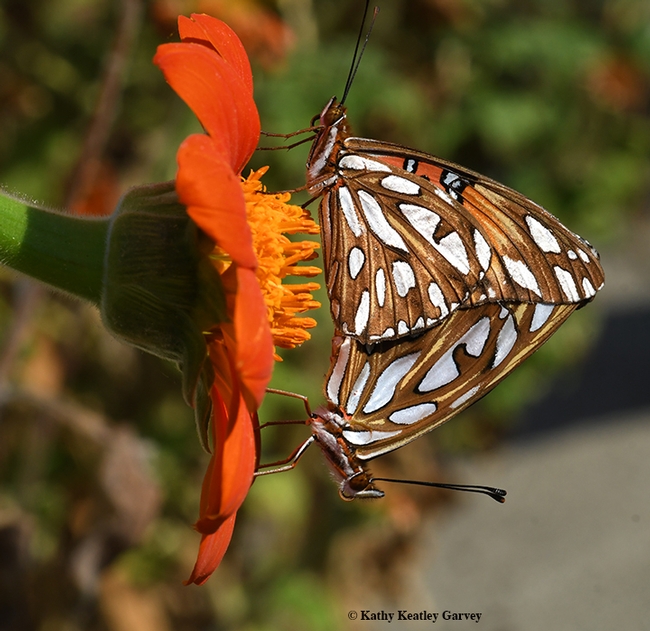 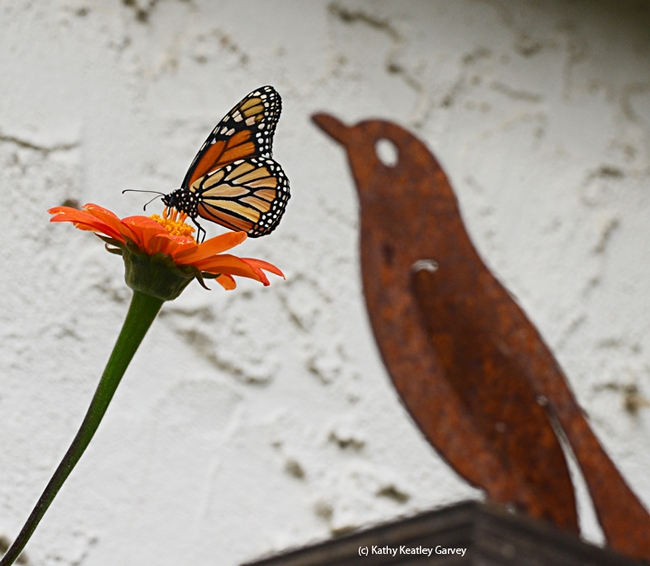 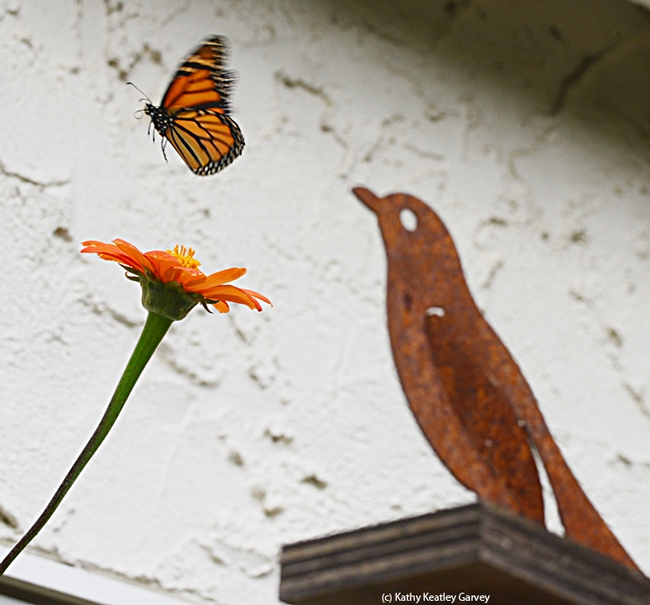 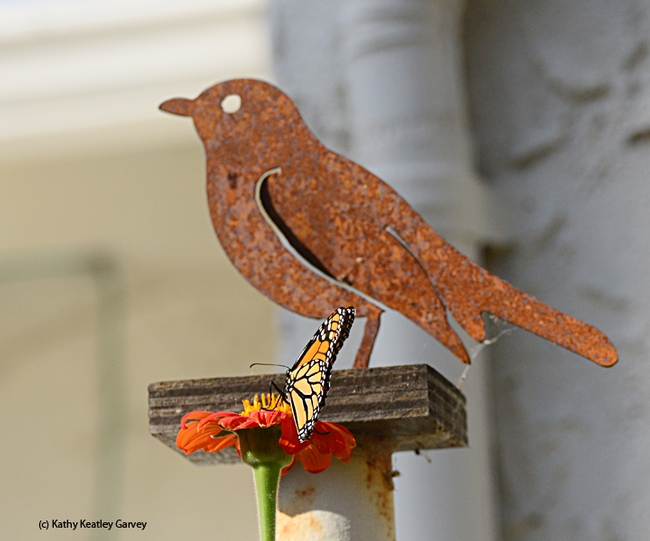 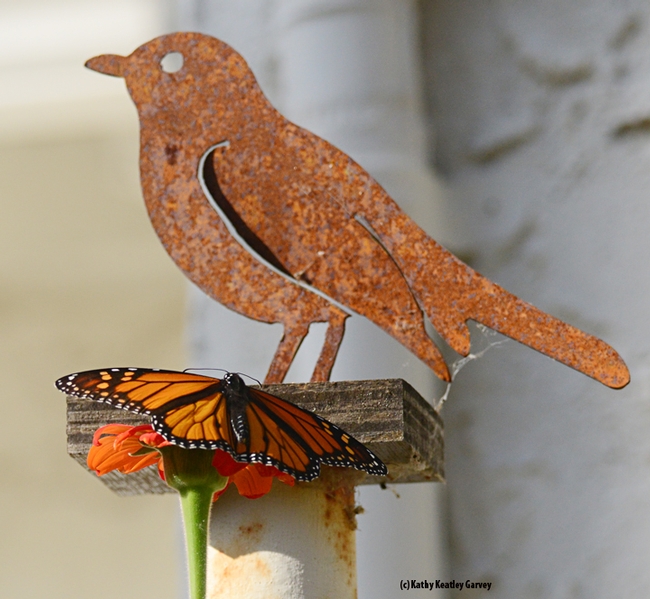 Where are all the monarch butterflies?

"An Epic Migration on the Verge of Collapse," wrote the Xerces Society for Invertebrate Conservation on its website detailing  monarch conservation.

"Both the eastern and western migrations have experienced significant decline in a matter of decades," they wrote. "In the 1990s, nearly 700 million monarchs made the epic flight each fall from the northern plains of the U.S. and Canada to sites in the oyamel fir forests north of Mexico City. Now, researchers and citizen scientists estimate that there has been a decline of more than 80% in the east. In the west, the news is more dire. Monarchs have experienced a decline of 99.4% in coastal California, from an estimated 4.5 million in the 1980s to 28,429 as of January 2019."

In our pollinator garden in Vacaville, I've seen only two monarchs this year. One, a female, lingered on the Mexican sunflowers (Tithonia rotundifolia) and butterfly bush (Buddleia davidii) for about 30 minutes on Sunday.

But as luck would have it, a family member spotted a monarch this morning in the garden section of a home improvement store in Vacaville and captured this video (below). It was laying eggs on tropical milkweeds, Asclepias curassavica.

Brookings, Ore., is fluttering with monarchs.

From the Facebook page, Monarch Butterflies in the Pacific Northwest, covering Washington State University entomologist David James' research and the work of his many citizen scientists, comes the remarkable story of a female monarch named Ovaltine (since passed) and her progeny:

Aug. 23: "The biggest Monarch story on the west coast right now has to be the population explosion in the far southern Oregon coastal town of Brookings! From a single female (that we know about) 'dumping' more than 700 eggs at one Monarch Waystation in late June, there is now such an abundance of Monarchs in Brookings that every patch of Milkweed seems to have eggs on it! It's quite likely that a few other Monarchs also laid a lot of eggs in Brookings in June, but what has been surprising is the way that females have targeted single Milkweed patches for egg 'dumping'. Egg 'dumping' has been observed in other Brookings Milkweed patches, some of them very small. Holly Beyer, whose Waystation hosted the first egg 'dumping' female, has now had to limit egglaying by the new generation of 'egg dumpers' by enclosing her milkweed in netting cages, for fear of the larvae running out of food! I have never heard of anybody needing to do this before! Brookings is an official 'Monarch City' so its certainly living up to its name and the Monarch festival to be held there in early September should be graced by plenty of Monarchs dropping in!"

Aug. 29: "Holly has counted more than 1800 eggs laid by Ovaltine's tagged daughters in her garden! Ovaltine's 'grandchildren' will soon begin eclosing (from mid-September to mid-October) and of course will be the migratory generation. Their numbers will be limited by milkweed availability in Brookings but I expect significant numbers of fresh, migrant monarchs to be milling around Brookings in the coming weeks, feeding on nectar before they depart southward. If Holly had not captive-reared Ovaltine's progeny, there would not be monarchs flying around Brookings in the numbers we are currently seeing! We do not generally consider captive-rearing to be a good conservation strategy for monarchs but in this instance it has demonstrably contributed to monarch conservation. If you want to see monarchs flying, then a trip to Brookings, Oregon in September could be in order!"

If you see any WSU-tagged monarchs migrating through California to their overwintering sites along the coast, photograph them and contact David James at monarch@wsu.edu. We distinctly remember the tagged monarch from Ashland, Ore. (tagged by Steve Johnson and part of the David James' citizen science project) that passed through our garden on Labor Day, 2016.  (See Bug Squad post.) 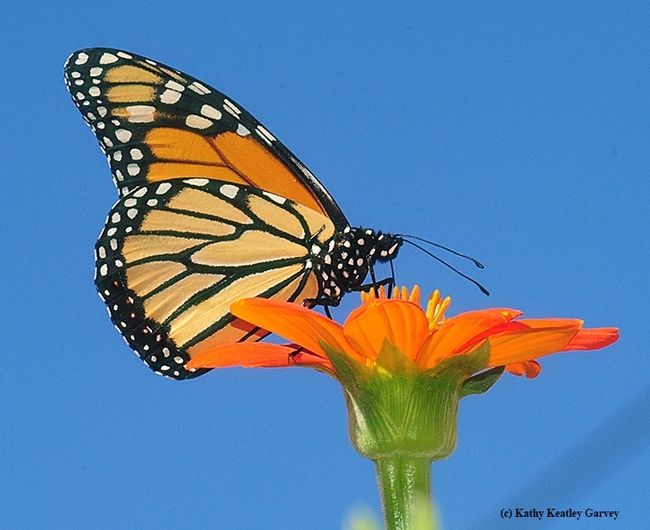 A monarch on a Mexican sunflower (Tithonia rotundifolia) in September 2016 in Vacaville, Calif. (Photo by Kathy Keatley Garvey) 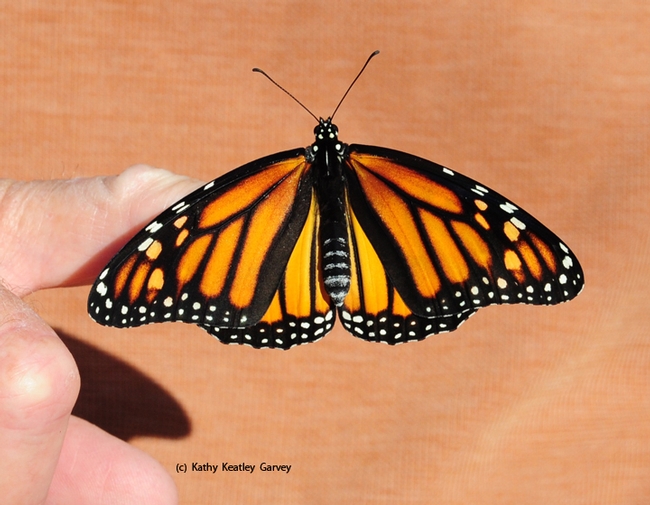