Bug Squad
sitenum=63
Happenings in the insect world
These Insects Thrive in the Extreme! This is a fire beetle, genus Melanophila. (Photo by Kathy Keatley Garvey)
A mannequin in a firefighter turncoat pinned with fire beetles drew "oohs" and "aahs" at the Bohart Museum of Entomology's open house last Sunday afternoon at the University of California, Davis.

"Fire beetles in the genus Melanophila are sensitive to smoke and heat from smoldering trees after a fire," said Lynn Kimsey, director of the Bohart and professor of entomology at UC Davis.  "They have a pair of pits on the body that detect heat. The beetles fly in large numbers to forest fires so they can lay their eggs in recently damaged trees.They will also crawl inside protective clothing of firefighters and bite them. Fire beetles will fly more than 50 miles to a fire."

Kimsey and animal biology major Crystal Homicz also told the crowd about smoke flies, which they described as "an odd group of platypezid flies use smoke plumes from burning trees to find mates. Swarms of 20 to 100 individuals can be seen 3 to 4 feet above the source of the smoke. They lay their eggs in burnt wood or soil near the burnt wood. Their larvae feed on burned plant parts and post-fire fungi."

Some insects can survive and thrive in extreme conditions beyond what humans could endure, they said. A sign read: "There are insects that can live in intense heat, cold, acidity or salinity, and some species are even attracted to fire. A wide variety of insects live in these extreme conditions, including flies, beetles, wasps and more."

Other signs informed the visitors of the insect peculiarities:

Heat
Many insects have a remarkable tolerance for high temperatures. No one knows how they survive and even thrive in these hot conditions. Several live at temperatures just below the boiling point of water.

Ice
A number of very different kinds of insects spend all or part of their lives in temperatures below freezing. Some are so adapted they cannot survive temperatures about 50°F.

Toxic Chemicals
A wide range of insects tolerate or even thrive on some quite toxic materials ranging from heavy metals to insecticides. These include orchid bees, lead cable borers and drugstore beetles.

Hot Springs
Hot Spring Midges. One group of chironomid midges lives in hot springs with a temperature of 180°F. What's more remarkable is that in these hot conditions, there is little if any dissolved oxygen, yet the larvae do not breathe from the surface and obtain the oxygen they need from the water. One species is known from the hot spring pools of Yellowstone National Park.

Salt/Salinity
Halophiles are animals that live in highly salty environments. They must be able to tolerate the toxic effects of sodium and other chemicals in the water and maintain their internal water balance. Additionally, many of these salty inland waters have a pH close to that of ammonia.

Next Open House on Sept. 22
The next Bohart Museum open house, themed "Crafty Insects," is set from 1 to 4 p.m., Saturday, Sept. 22 at its location in Room 1124 of the Academic Surge Building on Crocker Lane. All open houses are free and family friendly.

"We will be having a two-way museum," said Tabatha Yang, education and outreach coordinator.  "We will be displaying crafty--think cunning--insects and we are going to ask people to bring insect crafts that they have made, so all those folks who do felted, knitted, carved, sculpted crafters can share. Any and all hand-made, flea-shaped tea cozies are welcomed!"

The Bohart Museum houses a global collection of nearly eight million specimens. It is also the home of the seventh largest insect collection in North America, and the California Insect Survey, a storehouse of the insect biodiversity.  In addition to the petting zoo, the museum features a year-around gift shop, which is stocked with T-shirts, sweatshirts, books, jewelry, posters, insect-collecting equipment and insect-themed candy.

The Bohart Museum's regular hours are from 9 a.m. to noon and 1 to 5 p.m. Mondays through Thursdays. It is closed to the public on Fridays, Saturdays and Sundays and on major holidays. Admission is free.  More information on the Bohart Museum is available on the website or by contacting (530) 752-0493 or emailing bmuseum@ucdavis.edu 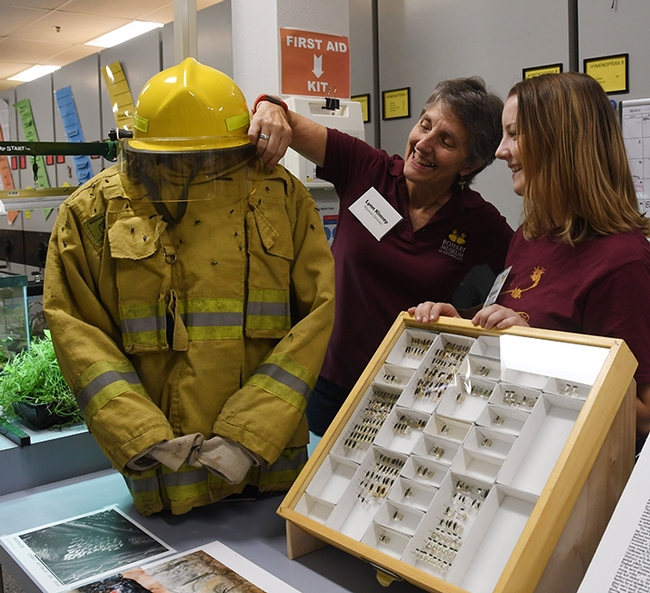 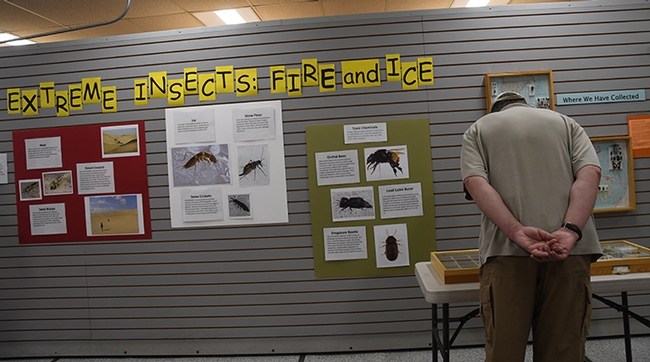 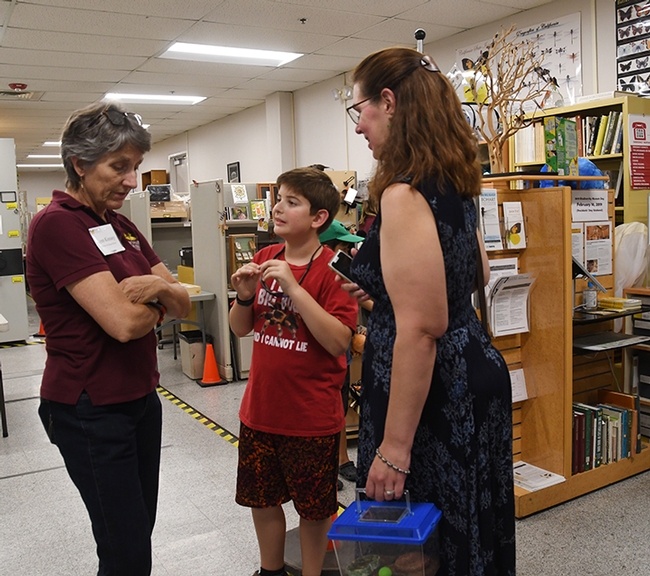 Delsin Russell, 8, of Vacaville, wearing a T-shirt, "I Like Big Bugs; I Cannot Lie," asks a question of Lynn Kimsey, director of the Bohart Museum. At right is Delsin's mother, Beth Russell, who related that Delsin wants to become an entomologist. (Photo by Kathy Keatley Garvey) 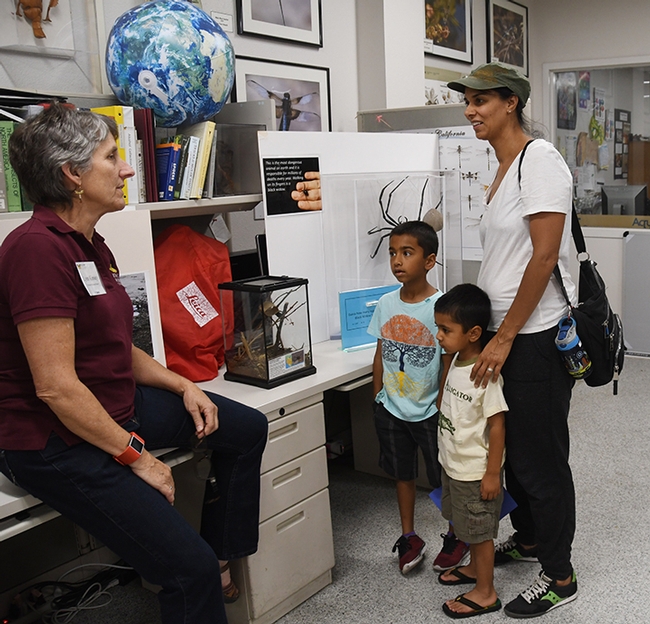 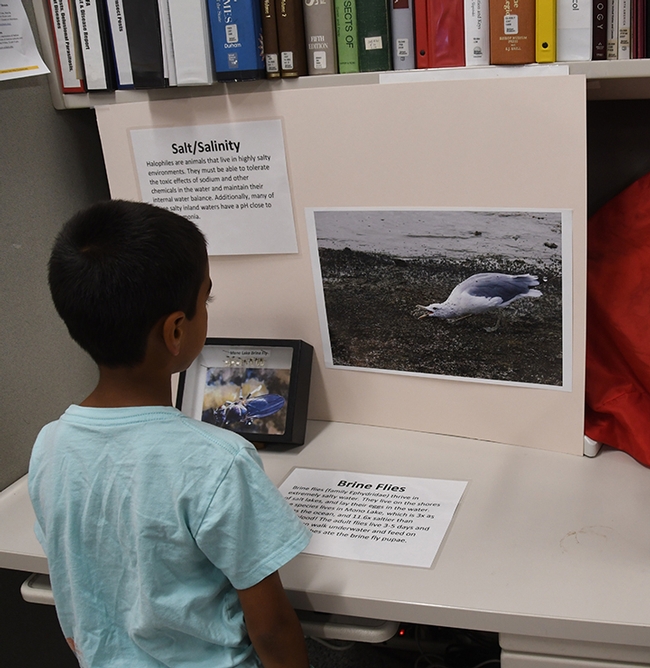 Rohan Jagadeesan, 6, of Folsom, reads all about insects who thrive in a salty habitat. (Photo by Kathy Keatley Garvey) 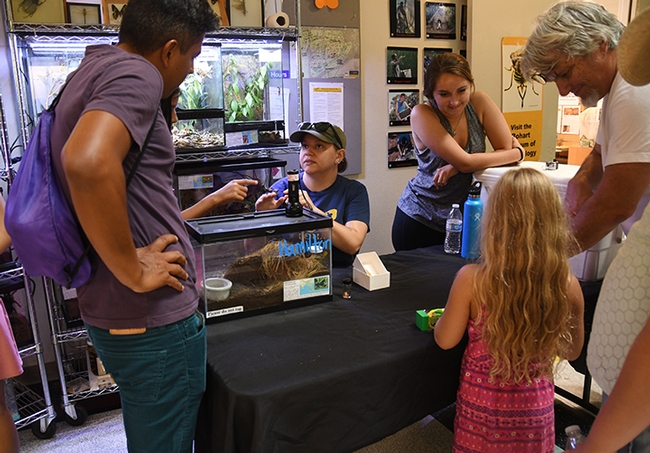 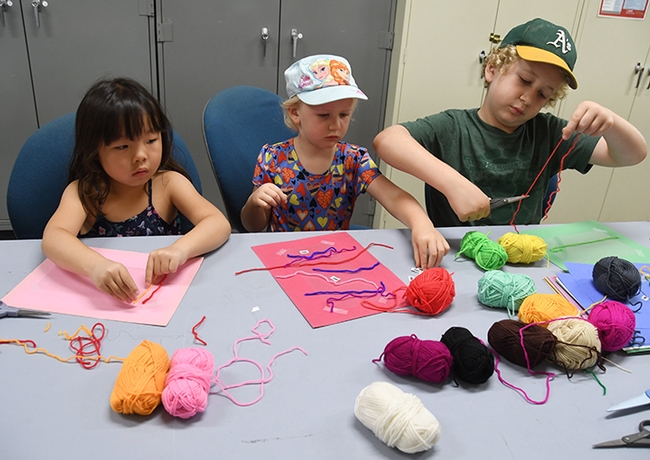 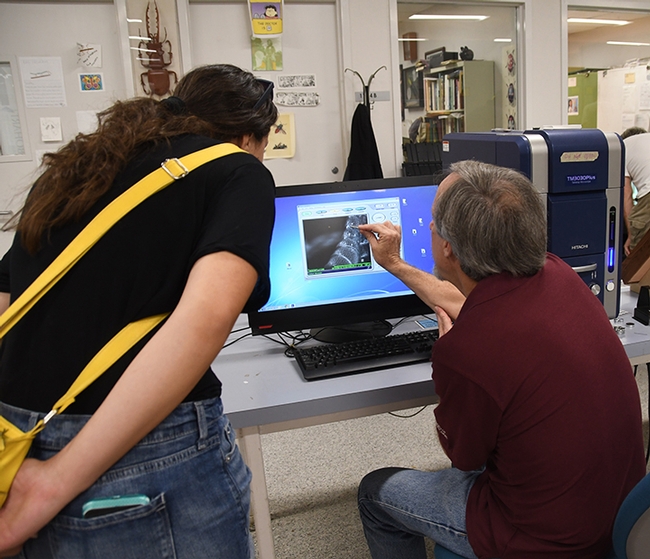