This has been a big year for purslane at the UC Davis farm. Common purslane (Portulaca oleracea) is a succulent summer annual weed with fleshy leaves and rubbery-looking stems. Native to Eurasia, or maybe Africa, purslane arrived in the Americas with the first Europeans to settle here. It is a common weed in row crops worldwide. Purslane is a tasty vegetable, either raw or cooked, and sometimes appears in farmer's markets and grocery stores. It is reported to be high in omega-3 fatty acids.

It's also a royal pain in the neck as a crop weed. Each plant produces thousands of tiny, long-lived seeds. The brittle stems make it difficult to pull or hoe, and stem fragments left on the soil will readily re-root. I once participated in a cultivation study in beans infested with purslane; rows which were mechanically cultivated ended up with more purslane than non-cultivated rows. 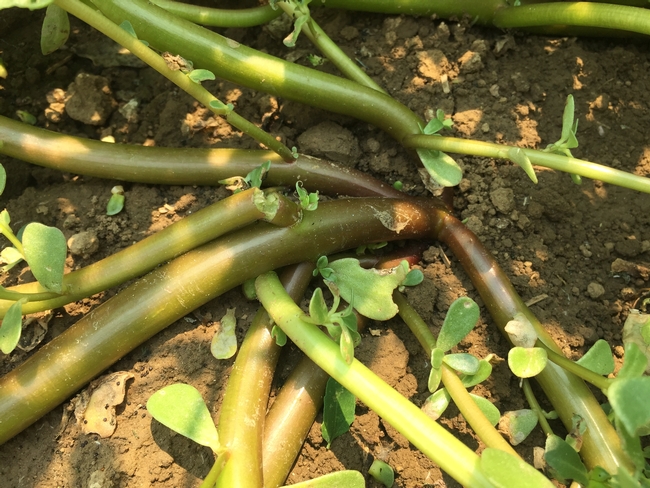 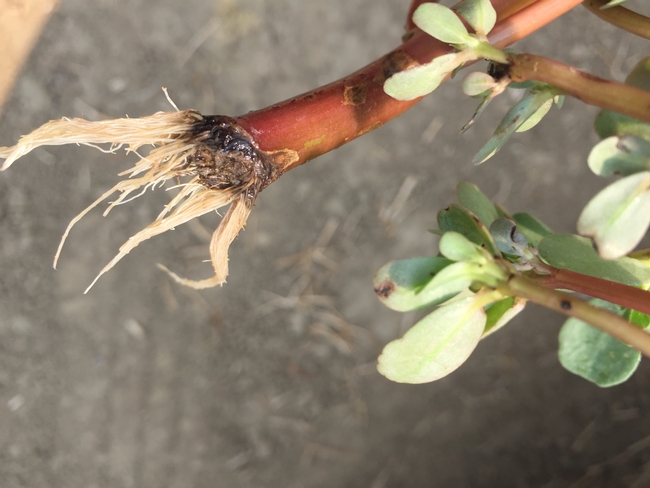 Left on the soil, purslane stem fragments form new roots (photo by Guy Kyser)
Tags: agricultural weed (6), weeds (48)
Comments: 3
Comments:
by Mollie
on February 4, 2020 at 12:18 PM
How do you prepare them to eat?
by Guy B Kyser
on February 4, 2020 at 2:38 PM
You don't have to do much besides wash them. Here's some ideas at a cooking site I visit sometimes.
https://www.epicurious.com/expert-advice/what-to-do-cook-with-purslane-article
by finest
on January 18, 2021 at 5:42 PM
Excellent article.
Leave a Reply: