Some folks call them "bumble bees," but they're not.

In size, the female Valley carpenter bee (Xylocopa varipuncta) resembles a bumble bee, but certainly not in color.

The female Valley carpenter is solid black with metallic wings. The male of the species is a green-eyed blond, fondly known as "the teddy bear" bee because it's fuzzy-wuzzy and cannot sting. Entomologists will tell you that the male and female are dramatic examples of sexual dimorphism. Yes, they are!

We've been seeing a lot of female Valley carpenter bees lately on our blue spike salvia, (Salvia uliginosa). They engage in nectar-robbing: this occurs when bees circumvent the usual plant-pollinator relationship and "cheat" by entering a flower from the outside to steal nectar. They drill a hole in the corolla to reach the nectar, thus avoiding pollination or contact with the anthers.

Similar-looking insects include bumble bees, cactus flies and horse flies, according to California Bees and Blooms, a Guide for Gardeners and Naturalists,by UC-affiliated authors Gordon Frankie, Robbin Thorp, Rollin Coville, and Barbara Ertter. "Carpenter bees are shinier and have less hair than fuzzy bumble bees. Carpenter bees have two pairs of wings, and they have long, slender, elbowed antennae, while fly mimics have only one pair of wings, and short stubby antennae."

They're large but they're elusive. They usually don't linger long for you to grab a photo. This one did. It was early in the morning, and like a true human morning person, she declined to move fast. 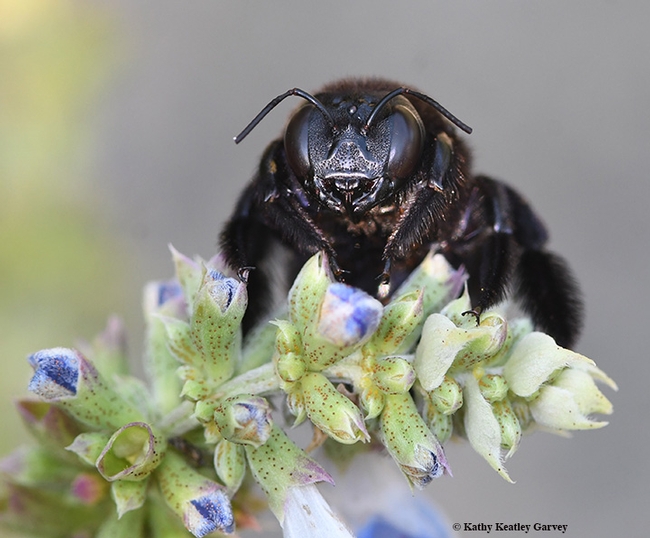 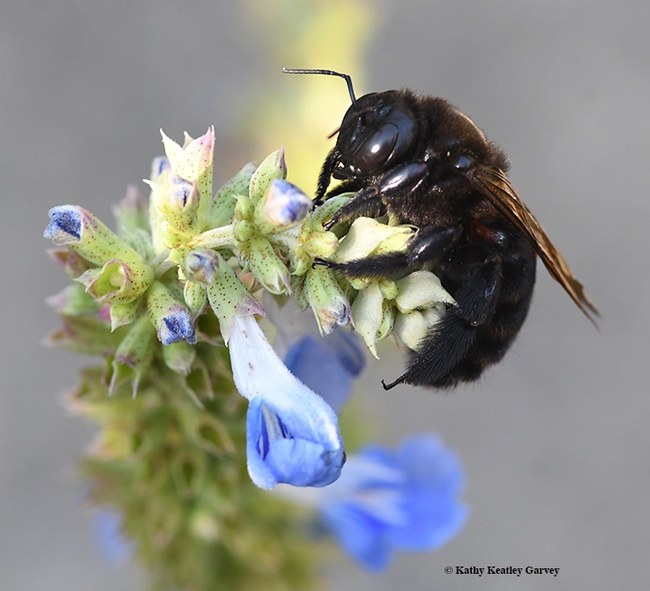 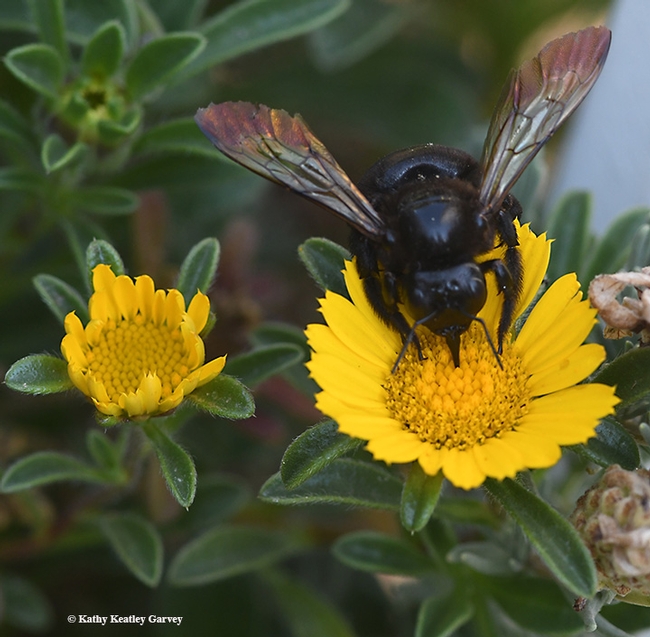 The metallic wings of the female Valley carpenter bee gleam in the sun as she sips nectar from gold coin, Asteriscus maritimus. (Photo by Kathy Keatley Garvey) 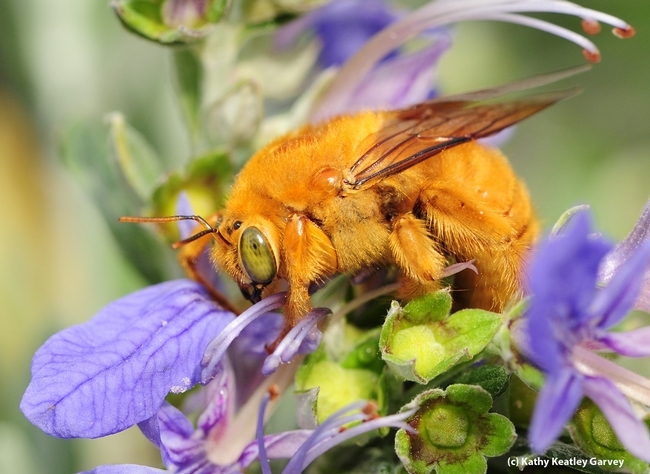 This is the male Valley carpenter, Xylocopa varipuncta, bee on germander. (Photo by Kathy Keatley Garvey)
Focus Areas:
Focus Area Tags: Environment, Yard & Garden
Tags: blue spike salvia (1), California Bees and Blooms (23), gold coin (2), Kathy Keatley Garvey (22), salvia (13), Valley carpenter bee (14), Xylocopa varipuncta (29)
Comments: 3
Comments:
by Lynn Merrick
on September 17, 2018 at 5:47 PM
Kathy, these are amazing pics! I love my carpenter bee visitors. Salvias are definitely their favorites.
by Gerrie Bannister
on September 18, 2018 at 5:25 PM
Very informative post. I have many of these industrious gals in my salvia beginning very early in the bloom season. They are my early morning garden buddies!
by Jami Byron
on May 20, 2020 at 11:29 AM
Today May 5, 2020 at 11:00 am, I saw for the first time the "teddy bear" bee enjoying our salvia in the garden.
It was a wonderful sight! My daughter said she saw him yesterday
Leave a Reply: